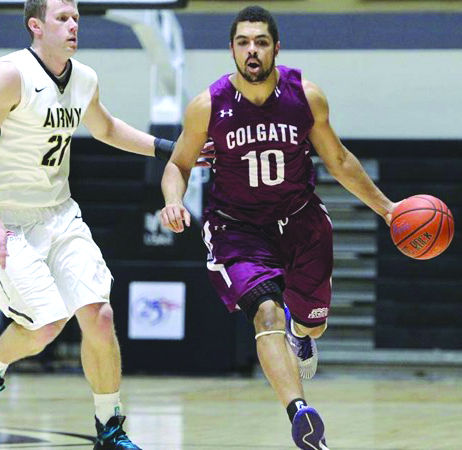 Senior guard Alex Ramon ended his last game for Colgate leading the team with 16 scored points. Unfortunately, the Raiders were unable to get a win.

The Colgate men’s basketball team entered the Patriot League Conference Tournament seeded No. 5, squaring off against the No. 4 Army Knights. Unfortunately, on Friday, March 4, Colgate fell short 79-72 in what was a very hard-fought game on both sides of the ball. This game resulted in the end of the Raiders’ season. Although the Raiders have had a bit of a rough season from an overall record point of view (13-17), they did substantially beat Army earlier in the season, 80-66.

For the Raiders, sophomore forward Jordan Swopshire and senior guard Alex Ramon led the way with 16 points each.

Colgate competed in the first half, scoring 29 total points, led by Swopshire and Ramon. The Raiders shot the ball well at 44 percent from the field and even slightly better at 46 percent from downtown. However, they went 0-6 from the free throw line and ended the half down seven.

In the second half, Colgate’s play improved, as did the pace of the game. After attempting just 27 shots in the first period, the Raiders had 41 attempts in the second half again, shooting it well at 44 percent. However, Colgate relied on the three-ball, putting up 17 shots from behind the arc. Cashing in on just five, the Raiders’ long ball waned to 29 percent and thwarted a comeback against Army. Colgate fought, scoring 43 against Army’s 44 in the period, but was unable to outperform their opponent and get ahead. While Army only made four three-pointers, they were dominant as a physical force against Colgate, getting to the line 23 times in the period and capitalizing on 16 of their free attempts. In contrast, Colgate was unable to match Army’s aggressiveness, only getting to the line 10 times and shooting an abysmal 20 percent from the line. Free throws have not been Colgate’s strong suit throughout the season but seemed to be the deciding factor in this contest, as making their other eight free throws would have given Colgate an advantage in the game. This is certainly something the Raiders will need to spend ample amounts of time on in the offseason. Another shortcoming of the Raiders season is their flow as a team up and down the court. It was only at the end of the season the team started to play more like a cohesive unit. The Raiders would have been much better served and their season trajectory much more different if they had come together and capitalized on both their offensive and defensive opportunities earlier in the season. Furthermore, those early season wins would have served as serious momentum for the Raiders as they headed into the remainder of the season.

Overall, Colgate had a solid season, competing on a weekly basis and taking down some tough opponents along the way. The team should be proud of the work they put in on and off the court and know the student body recognized their high level of play throughout the season. While the team will miss their starting guard and team captain, Tillotson, as well as the quality contribution of Alex Ramon off the bench, the team has promise going into next year. They retain four of their five starting players, and their core sophomore talent in O’Brien, Rivard, Swopshire and guard Jordan Robertson should make the Raiders an even more dominant team in the coming years. In addition, with hopefully strong new talent coming into the program, the Raiders should be set up well for success next year. Until then, the current Raiders need to take the offseason seriously to work on their weaknesses.