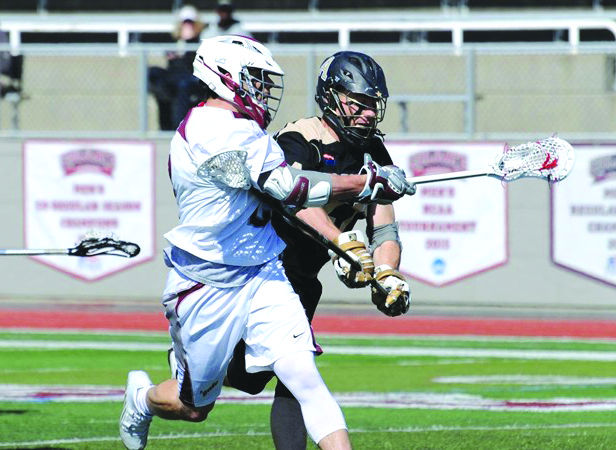 Senior captain Tyler Rigo recorded three goals for the Raiders in their tilt against the Black Knights. This marks his best offensive performance to date.

The Colgate men’s lacrosse team suffered a 11-7 home loss to No. 16 Army West Point on Saturday. Despite cutting the deficit to three goals late in the fourth quarter, the contest was never that close as the Raiders fell beyond 10-2 late in the third quarter. Colgate falls to 3-6 on the year and moves to 1-3 in Patriot League play after suffering their fourth loss in as many games.

Coming off back-to-back home losses, the Raiders were in need of a big win over a highly ranked opponent. The Black Knights got off to a fast start, gaining a 4-0 advantage with 7:12 remaining in the first quarter. Colgate first-year attackman Sam Cleveland would strike on the man-advantage to cut the lead to 4-1, but Army senior midfielder Jimbo Moore would score with just two seconds remaining in the first period to give Army a 5-1 lead.

Colgate senior midfielder Tyler Rigo found the back of the net just 31 seconds into the second quarter to cut the Army lead to just three. However, Army sophomore attackman Conor Glancy would score his fourth and fifth goals of the season to give the Black Knights a 7-2 lead at halftime. The Raiders needed to bring more momentum into the second half if they were to have any chance at defeating Army.

Colgate struggled to chip away at the Army lead as the second half begun. An early goal by Moore and two goals by junior attackman Cole Johnson gave Army West Point their largest lead of the afternoon at 10-2. Rigo would tally for the Raiders late in the quarter to cut the Raider deficit to seven goals after

Rigo would complete his first career hat trick when he scored with 9:56 remaining in the game. Colgate would go on to make a late rally when sophomore attackman Anthony Abbadessa scored his twelfth goal of the season and sophomore attackman Chase Wittich, a habitual offensive threat for the Raiders,  scored to cut the Army lead to 10-7 with just 3:13 remaining. Johnson would complete his hat trick and seal the victory for Army when he scored with 2:07 remaining to give the Black Knights a 11-7 victory in Hamilton. Army improved its record to 7-2 overall and 4-0 in Patriot League competition.

Army outshot Colgate 40-34 while picking up 30 ground balls to the Raiders 23. 11 of those 30 Army ground balls were scooped up in the fourth quarter. The Black Knights controlled the face-off battle, holding a 12-9 edge. Colgate junior goalie Brandon Burke stopped 11 shots. Despite turning the ball over just a season-low seven times, the Raiders were not able to stop a potent Army offense that capitalized off the few Raider turnovers on Saturday.

Colgate will compete in its fourth straight home game when the Loyola Greyhounds come to Hamilton this Sunday. The Greyhounds, coming off a convincing 14-3 victory over the Bucknell Bison, will look to grab their seventh win of the season. The Raiders may be looking at this game as a “must win” after falling to seventh place in the conference. Colgate will hope to halt a four game skid as they begin to gear up for the home stretch, where they seek to repeat as Patriot League tournament champions.

Sunday’s game against Loyola will begin promptly at 12 p.m. inside Raiders’ own  Andy Kerr Stadium and will be broadcast on live television on the CBS Sports Network. The weather for Saturday is supposed to be overcast, so watching the game on television might be a smarter move.