A Race to the Trade Deadline 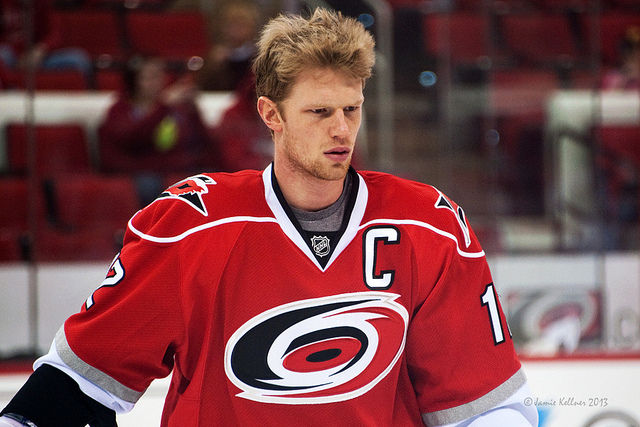 Will Eric Staal find his old form and help bring the Rangers their first Stanley Cup since 1994?

It’s that time of year again, as NHL teams go crazy trying to perfect their rosters before the trade deadline descends.   This year the deadline was February 29 at 3:00 p.m. EST, and the excitement, especially over the past several days, has not disappointed.

Sunday afternoon, the NY Rangers made a blockbuster maneuver by acquiring forward Eric Staal. The Thunder Bay, Canada native had quite the tenure with the Carolina Hurricanes, helping deliver a Stanley Cup championship in 2006 and becoming their go-to centerman and captain. Some say the 31-year-old has reached and passed the peak of his career. I personally believe this is a bit of an overstatement; it’s hard to ignore his recent lack of production in the goal department, as he only has 10 goals this season across 63 games. This is not an unusual trade for the New York Rangers, according to my good friend Benjamin Fortgang, the biggest Rangers fan I know. I got to catch up with him and hear his opinion on the trade:

“I would say this is another typical NY Rangers trade where they get a washed up veteran and potentially blow any good draft picks,” Ben said. “But you never know. Look at the (Martin) St. Louis trade a couple years ago. He really helped us out in the playoffs, so I’m looking forward to seeing what Staal could bring to the table.”

Another big name trade that occurred a few days ago was Andrew Ladd heading from Winnipeg to the Chicago Blackhawks in exchange for former first round pick Marko Dano and a conditional third-round pick.   I certainly was not expecting a trade of this magnitude coming from the Blackhawks, considering their  two Stanley Cups in the past four years. Rumors have it that Blackhawks coach Joel Quenneville will slot Ladd into the lineup with Marian Hossa and captain Jonathan Toews. As a Bruins fan, that line terrifies me. With the addition of a top two-line winger such as Ladd, Chicago has somehow managed to add even more depth and skill to their already impressive roster.

I will finish up with just a quick note on the Bruins’ situation at the deadline. All talk has been about Loui Eriksson. As I mentioned last week, Loui has not quite hit the potential Boston expected from him, but his season has been a breakout one, as he boasts 48 points in 62 games. I talked to my good friend, Teddy O’Hara, a die-hard Bruin fan like myself, to get his opinion on the matter:

“Regarding Loui, I’m not a huge fan of European style hockey, but I still think he’s a big part of the team and will be kept around,” Teddy said. “Speaking of Europe, his style is unreal. Definitely the kind of guy that will always throw on a suit.” I’d say I agree with Ted on this one.  Bruins  general manager Don Sweeney kept Loui onboard. As a Bruins fan, I like to have confidence in the team’s players, and I have confidence in Loui. I think Eriksson will continue his personal-best Bruins season, hopefully helping them make a playoff run in the process. Regardless, this trade deadline was as eventful as ever and it should shift the landscape of the entire league in the final few months of the season. I am very excited to see how the season plays out given these trades.