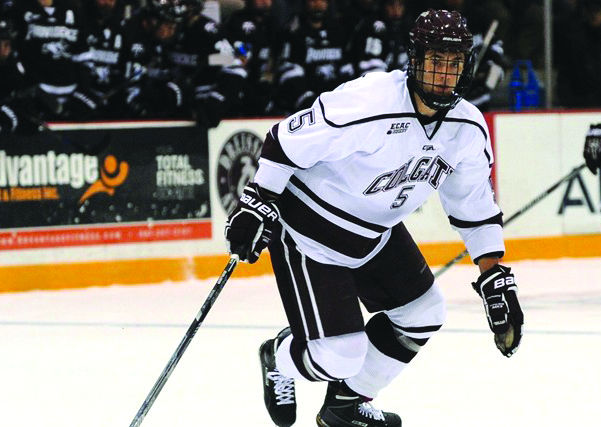 The men's hockey team fell in their best-of-3 series against Dartmouth in the ECAC Playoffs, ending their season.

Dartmouth forward Tim O’Brien scored to lift seventh-seeded Dartmouth to a 4-3 victory over tenth-seeded Colgate in the third and final game of their ECAC Hockey Championship first round series Sunday at Thompson Arena.

O’Brien’s goal came at the 4:37 mark of the second overtime, capping a back-and-forth effort where the Raiders held the lead on three separate occasions in regulation.

The balanced play continued into overtime, where both teams had multiple chances to end the game in the first overtime, only to see Colgate netminder junior Charlie Finn and Dartmouth keeper Charles Grant both make critical saves to keep the score even.

Early in the second overtime, Dartmouth capitalized off of a turnover to gain entry into the Colgate zone. Dartmouth’s John Ernsting then found O’Brien in the slot, who fired a wrist shot past Finn to the blocker side giving the Big Green the game and the series. With their victory, Dartmouth advances to the ECAC quarterfinals to face Yale.

“This was hockey. Doing this as long as I have, it doesn’t make it sting any less. I thought tonight we played the best game of the three, and significantly better. We had great opportunities. These are two teams, extremely evenly matched. It stings, but I am really proud of my guys. This is a team that struggled to find wins this year and this team never let the wheels come off,” Raiders head coach Don Vaughan said.

One of the things that always comes to mind after a tough, hard-fought series is that someone has to lose despite both teams deserving to win. Dartmouth and Colgate needed double overtime to settle their series on Sunday night in an even game that could have went either way. Unfortunately, the Raiders were the team that suffered the loss.

After a 4-3 loss in overtime in the first game of the series, the Raiders rebounded to even the series with a 5-3 game two victory. With their game three loss, Colgate’s unexpected rough season comes to a close. The Raiders, however, made a series of it and showed tremendous growth despite a lack of depth.

Senior forward Tylor Spink opened the scoring with a wrist shot from the middle of the slot for his second goal of the series. Dartmouth’s Carl Hessler answered with the equalizer five minutes later, capitalizing on a 2-on-1 rush for his 11th of the season.

The game remained tied at 1-1 until the third, when the two teams tallied four goals during a frantic 3:59 stretch.

Junior forward Tim Harrison opened the floodgates with a score, converting a 2-on-1 opportunity to give the Raiders a 2-1 lead.

The Colgate advantage lasted just 16 seconds, as Josh Hartley fired a shot from the point that struck the crossbar, but trickled across the goal line, to tie the contest at 2-2.

Nick Bligh brought the Big Green level once again only 59 seconds later, finishing a backdoor feed from Tim Shoup to even the contest and send the game to overtime.

Finn made 35 saves in goal for Colgate. Grant turned aside 38 shots for Dartmouth.

“I thought tonight we played our best game of the series and we came up short. We had some great opportunities – a couple of breakaways and 2-on-1’s – and their guy came up big on those. At the end of the night, that’s probably the difference. We could have certainly scored two or three more goals tonight, but they could say the same thing last night. It was two teams that were extremely evenly matched,” Vaughan said.

With the loss, Colgate’s senior class, that led them to two consecutive ECAC finals the last two seasons, departs. Mike Borkowski, Kevin Lough, Darcy Murphy and Tyson and Tylor Spink are all talented players that will be missed by the program. Add in Ryan Johnston and Kyle Baun, who both left the class a year early before this season, the ending may have been very different. While this season did not end in the Raiders’ favor, there is always next season. The team will especially look to next year’s seniors Emilo Audi, Derek Freeman, Tim Harrison and Jake Kulevich. While there are big shoes to fill, these players will certainly take on leadership positions quite well. Working hard in the offseason will also assure the Raiders a strong season next year. With a brand new rink comes a new mentality.