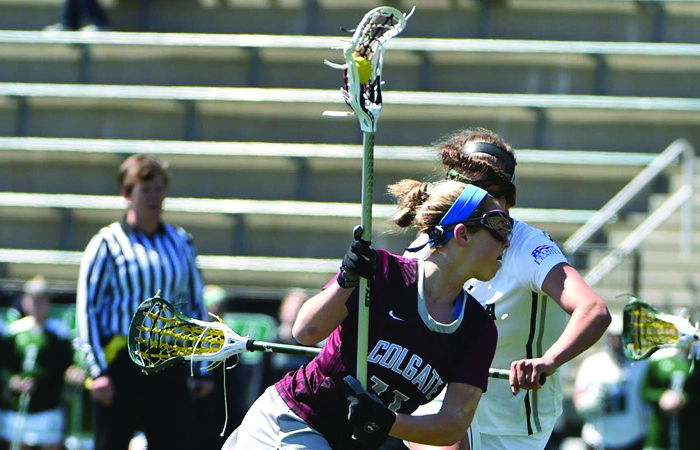 This past week yielded both triumph and loss for the Raiders with a win in overtime against Niagara this past Tuesday, February 23, and a four-goal defeat at the hands of Drexel on Sunday.

The Raiders achieved victory in their home opener with an 11-10 win over Niagara in overtime. Niagara had a 2-0 lead in the game to start but they were quickly combatted by Colgate’s skilled offense. Junior midfielder Isabel Kreitler and senior attacker Emily Peebles scored two goals each for the Raiders in the first half, followed by a goal from senior captain Kallan Murray. The second half started off just as strong for the Raiders with goals by Peebles, senior captain Lauren Gorajek and sophomore midfielder Haley O’Hanlon in the first 10 minutes of the period. Niagara held a strong 9-8 lead halfway through the second half that held until the last six minutes when Kreitler scored her third goal of the game.

Colgate then established a short-lived 10-9 lead with another goal from Peebles only for the game to by tied up by Niagara in the remaining few minutes. In overtime, Kreitler was awarded a free-position attempt that was initially stopped by the Niagara keeper but then rebounded by Kreitler and shot into the net for a Raider win. The win against Niagara marks head coach Heather Young’s 80th victory at Colgate.

Coming off the Niagara win the team suffered a loss against Drexel in Philadelphia, Pa. on Sunday. Despite a strong first half, the Raiders lost the game 11-7.

Though the first half seemed promising with the Raiders down by only one goal, they ultimately fell to the Dragons by four goals at the end of the game. Despite their loss, the Raiders played a hard fought game. Drexel scored the first goal of the game within the first 18 seconds of the first half, but the Raiders refused to be discouraged, managing to tie it up just minutes later with a goal from Peebles.

The rest of the first half proved highly competitive as the Dragons struggled for dominance, the Raiders unwilling to give up more than a one-goal lead. The Dragons increased their lead in the second half with an impressive three goals in the first four minutes. Unwilling to admit defeat, the Raiders came back with three goals of their own off the sticks of Gorajek, Krietler, and sophomore defender Natalie Washuta, making it a 7-6 contest. The Dragons, however, responded with yet another three unanswered goals, just enough to put the game out of reach.

Unfortunately for Colgate, despite a Raider goal by senior attacker Taylor Fischer, the Dragons controlled the ball for a greater portion of the second half, ending the game with another goal in the final minutes. Allowing their opponents to control the ball for a long period of time is something the Raiders can continue to work on as the season progresses. Despite the Raiders’ 1-2 record, Washuta is hopeful for the team’s future.

“It’s still early in the season, so right now we are mainly focusing on playing the full 60 minutes to the highest level we know we can compete at. Fixing little things and playing consistently are our two challenges, and goals, as of now. However, with every practice and game that passes we all get a little smarter, a little tougher and a lot more hungry for a win at the end of the day,” Washuta said.

Colgate has an opportunity to even out its season record with a game against Siena on Saturday March 5 in Loudonville, NY.  The season is still very young for the Raiders and hopefully they can establish a long winning streak and carry momentum into post-season play. With a well balanced team and leadership from veteran players like Murray, Gorajek and Peebles, the Raiders can situate themselves quite nicely if they establish their dominant form of game play early on in the season.