Black Mamba’s Venom Has Run Out: A Look Back at One of the Best to Ever Do It, Kobe Bryant 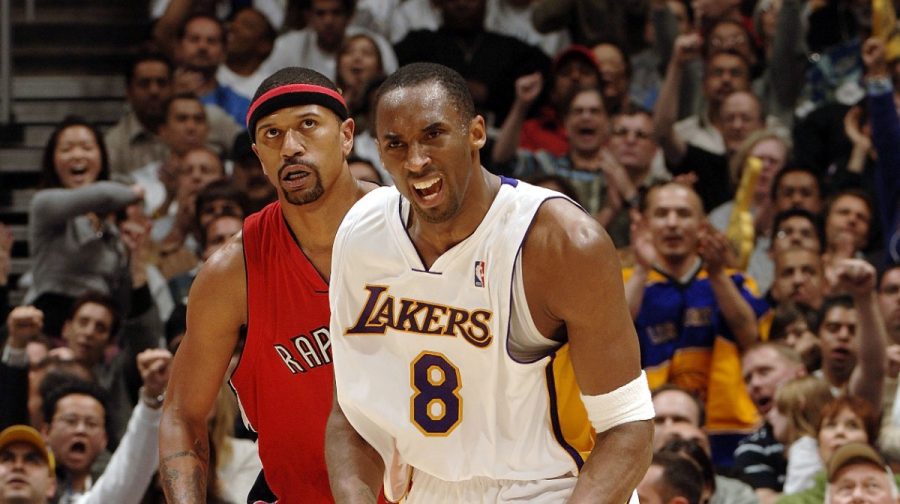 Arguably Kobe’s most historic moment was when he went for 81 points in a single game in 2006, the second most in NBA history.

This season will be Kobe Bryant’s 20th and final year in the NBA. Holding the record for most consecutive seasons with the same team, Kobe has been a faithful warrior for the Lakers, winning five championships, MVP honors and many other achievements. Growing up I was never a huge Kobe fan, however, I think it is important to recognize the impact he has had on the game of basketball and admit his status as the best player of his era.

Coming straight out of high school from Lower Merion, Pa., Kobe was selected No. 13 overall in the 1996 NBA draft. He soon became a fan favorite, most known for his highflying dunking during games. In fact, as a rookie, Kobe was chosen to be in the 1997 Slam Dunk Contest where his young bounce electrified the crowd and granted him the title. By his second season, Kobe had become an NBA all-star. Since then, Kobe has tallied 18 total all-star game appearances, most ever by a single player, culminating with his appearance this year in his final season, in which he earned the most all-star votes of any player in the league.

After a few years of gathered experience in the league, Kobe went on to win three straight championships from 2000-2002 with the help of all-time great center Shaquille O’Neal. However, in 2003 a feud ignited between this prolific guard-center combo, culminating in an early playoff loss and Shaq subsequently leaving L.A. to play for the Heat and team up with Dwyane Wade. Once Shaq was gone, Kobe exploded as the face of the franchise, developing his alter ego as the “Black Mamba.” As Kobe explained to the media, this persona embodied his killer mentality on the court. Kobe has commented on this persona, saying, “It was just f*** everyone. I’m destroying everybody that steps on the court. I had all this pent-up frustration that I just needed to let out. It was an avalanche, man. There was nothing that was going to get in the way. There was nothing that was going to stop me.”

Kobe’s lethal killer-scoring mentality became world-known when he went off for 81 points in a single game in 2006 against the Toronto Raptors. This record is second only to the great Wilt Chamberlain, who had 30 years prior scored 100 points in a game. However, Kobe’s performance was arguably even more impressive. During Wilt’s game, all of his shots were presumably close to the basket and thus higher-percentage attempts; there was no three-point line at the time and Wilt was 7’1, playing as a giant among men. Additionally, Wilt had played a full 48 minutes while Kobe only played 42. Furthermore, Wilt took 63 shots, compared to Kobe’s 46. In total, Kobe played fewer minutes, took less shots and scored at a more efficient rate while shooting from much farther away from the basket. Also, since Wilt played in the 1960’s, his 100-point game was not taped; making Kobe’s 81-point game the highest scoring recorded game on film. While fans praise Wilt’s record, their praise is strictly intellectual and removed from tangible reverence. When you picture a player scoring on every single possession down the floor, you remember Kobe against the Raptors making shots from everywhere on the floor; you don’t imagine Wilt scoring layups over people half-a-foot shorter wearing short-shorts.

After this historic game, Kobe played out the rest of his career embodying the alternate persona he had created. He led the league in scoring in 2005-2006 and 2006-2007. He teamed up with big man Pau Gasol in ‘08 and won the MVP but lost in the finals. However, their chemistry only grew and they brought home rings the next two years.

Kobe tore his Achilles tendon in 2013, starting a stem of unfortunate injury difficulties which have continued into his final season. After 20 years, Kobe has accumulated a collection of accolades, including being the third highest scoring player in both regular and postseason play. He certainly deserves praise for being the best player of his generation, but should he be idolized?

I argue that Kobe was incredible because only Kobe can be Kobe. Growing up playing basketball, whenever people would shoot the ball they would say “Kobe” as a catchphrase. However, this most typically happened when someone took a bad shot. Unfortunately, Kobe’s “me first” mentality, evident by not wanting to share the spotlight with Shaq and his alter ego as a “F everyone else” kinda guy, has helped catalyze the selfish individual play that currently plagues professional basketball. From the great team play in college, kids entering the league seem to instinctively buy into the individual state of mind that superstardom has projected through the last few decades. Kobe should be revered as a lethal scoring weapon, the greatest pure-scorer maybe ever to play the game, but his attitude seems to draw a distinct contrast with Michael Jordan (the other greatest lethal scorer to ever touch a basketball). However, kids don’t throw up 30 footers and yell “Jordan” before the ball bricks off of the backboard, they yell “Kobe.” He will forever be regarded as one of the best players in our generation.