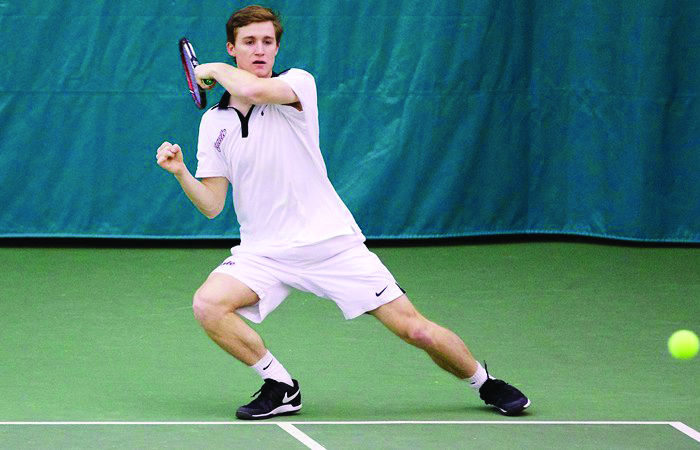 The men’s tennis team had an eventful break, increasing their overall record to 11-4 after two important victories against Hofstra and Holy Cross. After the break, the Raiders faced off against Boston University.

On a windy Sunday afternoon at the J. W. Abrahamson courts at Colgate, the Raiders fell to the Boston University Terriers by a tally of 4-3. Indeed, despite suffering this tough loss and their first Patriot League loss of the season, head coach Bobby Pennington was proud of the progress his team has made from this point last season.

“Even though we lost a heartbreaker, I could not be more proud of my team. We lost 7-0 to this team last year and came within a few single points of winning today,” Pennington said.

In atypical fashion, the Raiders were not able to secure the coveted doubles point, ultimately leading to their demise. At first doubles, sophomore Jacob Daugherty and senior Tom Haile continued their dominance, cruising past first-year Satyajit Simhadri and junior Lucas Bombonatti, 6-1. Senior Nick Laub and junior Bobby Alter fell to juniors Jake De Vries and Jay Leelavanich at second doubles by a score of 6-4. At third doubles, juniors Jake Hirschberg and Dean Koman were unable to pull out enough stops against junior Miguel Cepeda and senior Stefan Lemire, losing 6-3.

Most notable on Sunday was how the conditions affected certain matches. For players like Daugherty who hit flat, low groundstrokes, the wind essentially had no effect, while players like Hirschberg who hit topspin-heavy forehands had to adapt. Credit Hirschberg for altering his game, by deploying a heavy dose of  forehand slices throughout the match, and fighting through the conditions to produce a positive result for the Raiders at No. 5 singles.

Daugherty dispatched Leelavanich at No. 1 singles by a score of 6-4, 3-6, 6-2. In addition to keeping the ball low throughout the match, it was noticeable how often Daugherty came to the net to finish points, instead of opting for long, baseline points. At No. 2 singles, Laub lost to Lemire 6-7 (8-10), 6-2, 6-4. This was probably the match most impacted by the conditions, as the backboard style of play Lemire brought to the match was enough to outlast the aggressive style of play Laub employs. Perhaps in an indoor setting, Laub would have no trouble in a rematch against Lemire. At No. 3 singles, first-year Noah Rosenblat fell to Bombonatti 7-6 (7-5), 7-5. Alter fell to Simhadri at No. 4 singles 7-5, 7-5. This match was probably the most entertaining of the day to watch, as both players were fairly relentless with their attacks. Indeed, Alter spent much of the afternoon running around his backhand in order to drive the ball with his signature big, lefty forehand. Hirschberg was able to defeat De Vries at No. 5 singles 6-4, 6-2. This win was more a result of clever tactics, and an ability to play multiple styles of play, as Hirschberg had to alter his game for the conditions and for his opponent. De Vries struggled at times with lifting the low, back-spin shots up over the net, yet low enough to stay in play, and Hirschberg recognized this early in the first set. Finally, junior Win Reynolds won a hard-fought match over first-year Jeff Chan at the No. 6 singles spot 6-2, 1-6, 6-3.

The Raiders continue this stretch of Patriot League play this weekend when they travel to Pennsylvania to take on Lehigh and Bucknell on Saturday and Sunday respectively. The Raiders fell to Bucknell last season in postseason play, so this match should be a great opportunity to determine how this year’s team has improved over last year’s team. The Raiders need to capitalize on this opportunity.