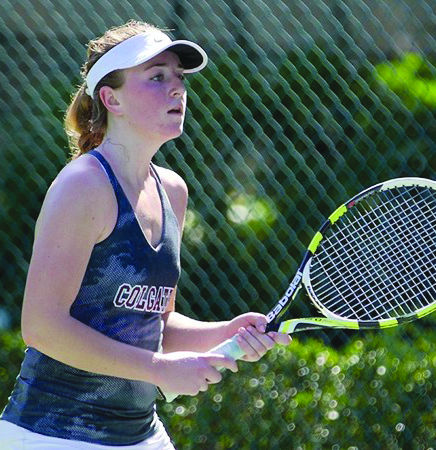 Sophomore Kelly Klein helped the Raiders secure a decisive victory over Roberts Wesleyan this past Saturday.

The Raiders reversed their record from last weekend, first crushing Roberts Wesleyan 7-0 and then falling to Albany 7-0. The last two weekends have delivered the Raiders with extreme highs and lows. The team is looking to elevate their momentum this week with an away match against Siena on March 11.

On Saturday, Colgate hit the court ready to snatch a quick, clean victory from Roberts Wesleyan. All three doubles matches came out in the Raiders’ favor. With a solid lead, the Raiders finished off the Redhawks in straight sets in each singles match.

The solid win bumped Colgate’s record to 5-2 in the season while the setback put Roberts Wesleyan at 6-9.

According to sophomore Kelly Klein, the team does not take these wins lightly.

“A lot of times I think it can be easy to look past easy wins like this and assume we didn’t learn anything, but that’s definitely not true,” Klein said. “The complete turn around in our results the next day proves that you need to go in focused and understand you can always improve. I know I could have won my match by more if I finished my shots a little better. It’s really crucial not to overlook any team because we are by no means perfect.”

The Raiders went into Sunday’s match on a high, but were not quite prepared for Albany’s power. Colgate started off shaky, losing all three doubles matches. Albany took advantage of their lead. The Great Danes dominated in singles play, winning each match in straight sets.

Senior Katie Grant spoke on how the team deals with big wins and big losses.

“The transition from such a convincing win to a tough loss is definitely difficult. The most important thing for us is to move past it and keep a positive attitude going into this coming weekend. At the end of the day it’s not a conference match so we just have to put it behind us and get ready for our big matches,” Grant said.

The win puts Albany at 4-5 overall in the season, but drops Colgate to 5-3. The Raiders will face off against Siena on March 11 at 5 p.m. on the Saints’ turf.

After going through two weekends with extreme match play, Grant sees how important every match is.

“Going forward we definitely have to focus on getting the doubles point, because that one point advantage is a huge mental edge going into singles,” Grant said. “It’s also key for us to start fast and stay positive, it’s tough to dig back when everyone’s down early, so a strong start will be really important for us as we get into conference play in the next few weeks.”

While the Raiders currently post a winning season, a 0-7 loss can prove to be a huge mental blow to the team’s spirits. Thus, it is thus very important for the Raiders to go into the next several games with a winning attitude and the drive to get the job done. These next couple of games could determine how the rest of their season goes. This starts with Siena University this coming Friday, March 11, New Jersey Institute of Technology Saturday, March 12 and then Hofstra University on Sunday, March 13. This three game run will prove to be a trying time for the Raiders. Coming off a three game win streak would be huge for the team’s momentum. After these three games, the Raiders have another three away games.