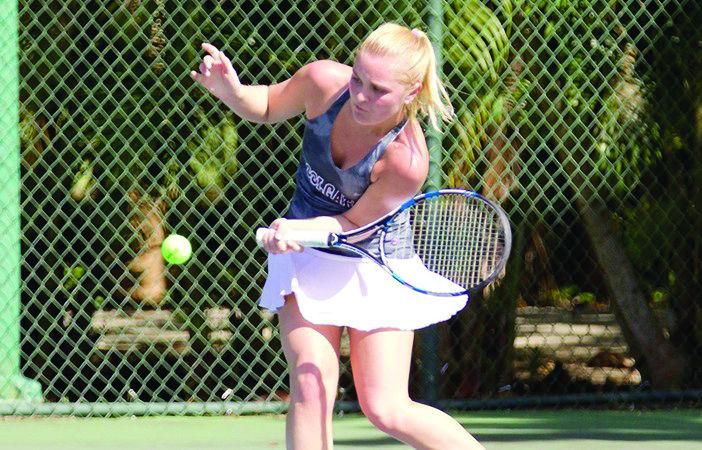 The Raiders pulled out a strong win against La Salle on Sunday, crushing the Explorers 7-0,after a devastating loss against Drexel the day before. The team is looking to maintain their momentum against Roberts Wesleyan next Saturday at the Turning Stone Sportsplex.

Drexel came out strong on Saturday against the Raiders. Colgate received a victory at No. 1 doubles due to a default, but the Dragons quickly secured the No. 2 and No. 3 matches resulting in a one-point lead.

The Raiders battled to bounce back in singles play. However, Drexel continued to dominate and claimed all six matches in straight sets. The 7-0 win helped Drexel to improve to 7-2 in the season, while the setback dropped Colgate to 3-2 overall.

Sophomore Kelly Klein acknowledged how every point and game of a match can make a huge difference while battling a team with a caliber like Drexel.

“I think a lot of the matches were a lot closer than the recorded scores. I know a lot of games went to deuce points, but we couldn’t quite close it out to get a closer overall score. Drexel had some big hitters and ultimately were able to use that finishing edge,” Kelly said.

While thinking about transitioning from a tough loss to a match the next day, Kelly emphasized the importance of mental strength.

“Our coach reminded us that we needed to keep our holistic team energy up in order to gain some momentum for our match the next day,” Kelly said. “We can’t let matches like these get us down or it’ll negatively affect the way we will play for the rest of the season. It’s really mental, and staying positive is just as important as any other physical part of the game.”

Colgate remained in Philly on Sunday to face off against La Salle University. The Raiders spared no matches during their comeback, taking all three doubles matches to start off strong. The Explorers’ defeat became imminent as Colgate captured all six singles matches, five overall in straight sets.

According to junior Kaelin Brittin, Colgate’s motivation to make a comeback was clearly visible.

“We crushed La Salle 7-0, none of the matches were even close and it felt great to win. We did expect La Salle to not be as strong and I think our confidence was much stronger with that in mind going into Sunday’s match,” Brittin said.

The win against La Salle upgraded the Raiders’ record to 4-2 overall, while the Explorers dropped to 0-5 overall. As always, a 7-0 victory is great for a team’s momentum and mentality as it heads into the the bulk of the season. Head coach Bobby Pennington was pleased with the team’s performance on Sunday and shared his thoughts on the game.

“We talked about coming out really strong and sharp against La Salle, which they did. It was a pretty quick and clean team win overall,” Pennington said.

Looking forward, Brittin knows how important it is to learn from quick turnarounds, such as this weekend. Taking note of not only the losses, but also the victories that Raiders have been through is very important for a successful season.

“In the future, we are looking to maintain our fitness level and bring a lot more energy into matches against stronger teams similar to Drexel,” Brittin said.

Coach Pennington feels that the team has the potential for a better Patriot League finish this year.

“Anytime you return everyone and have two new starters, especially having someone who’s playing at No. 1 as a freshman, that’s a huge help,” Pennington said.

Up next the Raiders will host both Roberts Wesleyan and Albany at the Turning Stone Sportsplex. Colgate is looking to keep their energy high after coming off the win against La Salle and add two more victories to their record.