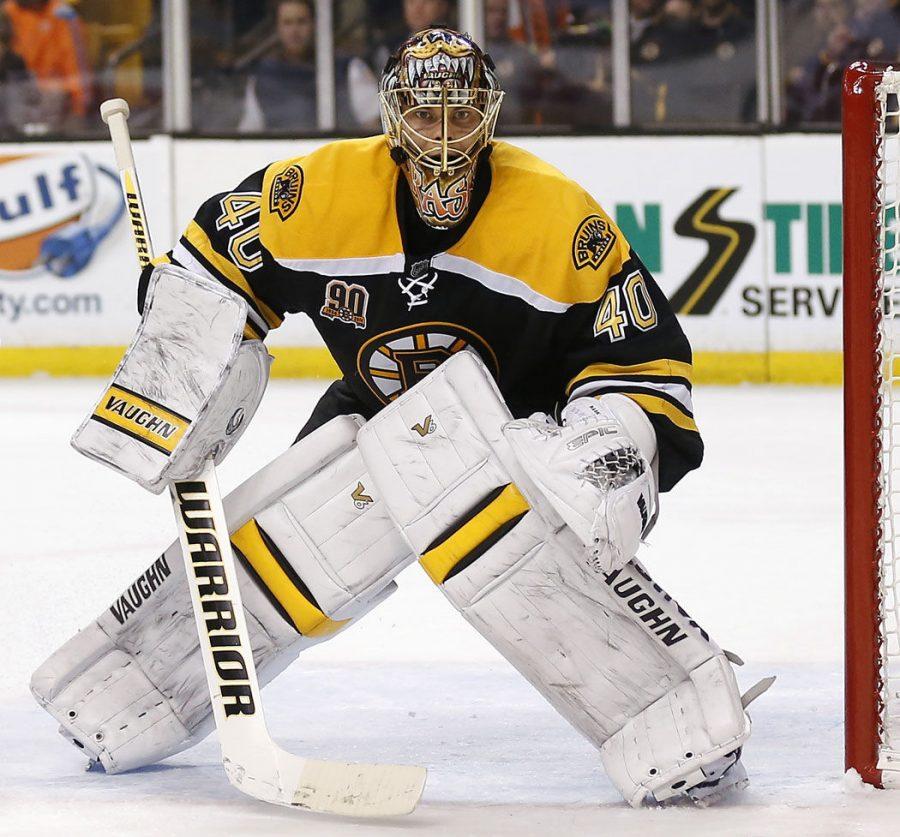 The Bruins goalie’s struggles have sent Boston into a recent tailspin, threatening their playoff chances.

With the end of the NHL regular season just two weeks away, several teams have already clinched a playoff berth, while others face the dreadful prospect of being mathematically eliminated from any chance to compete for the Stanley Cup. It happens every year. It’s far more interesting to look at the teams in the hunt, whose last games determine their playoff fate. That’s what I plan to do in this week’s article: I’ll highlight some notable teams in each conference and give my predictions and my take on the dynamics of the league this year.

The NHL is divided into two conferences, East and West. I dislike the new playoff system, which has been in place since 2014, with its general disarray and distribution of wild card berths. Nevertheless, it allows for roughly the top half of each conference to qualify: eight teams from each conference. The West is a bit more predictable this year than the East, with four teams already clinching playoff berths (Dallas, St. Louis, Los Angeles and Anaheim) and two teams in the wild card holding a significant lead over the trailing teams.

I believe that you need a reliable goalie to win the Stanley Cup, so goaltending plays a major role in how I evaluate a team’s potential for playoff success. I see Nashville goaltender Pekka Rinne holding strong and finishing his first healthy season in several years, keeping the Predators in the current first wild card spot. Minnesota, currently in the second and final wild card spot, just came off a strong victory against Colorado, who is right behind them in the standings. In that victory, Devan Dubnyk stood tall, stopping all 29 shots to earn his fifth shut out of the year. I see them keeping that final wild card spot as they enter the playoffs.

The Eastern Conference is a whole different story, and a chaotic one at that. To start, the Washington Capitals are finishing up one of their best seasons in franchise history. Leading the league with 111 points and eight games still remaining, the Caps are a huge 12 points ahead of the second team in the league and have already clinched top position in the East. However, quite a bit of uncertainty characterizes the rest of the conference, and the “push for the playoffs” is all too real and tight for upwards of eight teams. My short article here cannot do justice to the whole picture, so I’ll focus on just two teams in the hunt.

My beloved Boston Bruins currently stand in the last playoff spot in their division, but only three points ahead of wild card contender the Detroit Red Wings, and only three and five points behind their conference second and first place, respectively. However, with just one win in their last six games, and goalie Tuukka Rask’s recent lackluster performances, the Bruins have been giving their fans quite a lot to worry over. Going into the playoffs on a hot streak cannot be downplayed, bringing with it a much-needed boost of energy in the first round and throughout the rest of the long playoff season. As of now, I see the Bruins making the playoffs this year. However, coach Claude Julien needs to light a match under his team and start that hot streak soon, or else Bruins Nation could have a long and painful offseason to wonder what went wrong.

Detroit, having made the postseason for 24 seasons running, is coming perilously close to ending that streak. However, with their star rookie Dylan Larkin providing a talented, quick presence on the ice, and Pavel Datsyuk working his magic, I see them surpassing the Philadelphia Flyers to grab the last wild card spot. From the goaltending perspective, I see Detroit’s Jimmy Howard/Peter Mrazek duo outplaying Philadelphia’s Steve Mason/Michael Neuvirth.

These are always exciting times around the league, and this year, particularly the East, has not disappointed. Perhaps next week the hockey world will have a clearer playoff picture; but then again, perhaps not! Watch this space to see what your local Boston Bruins and hockey fanatic thinks.