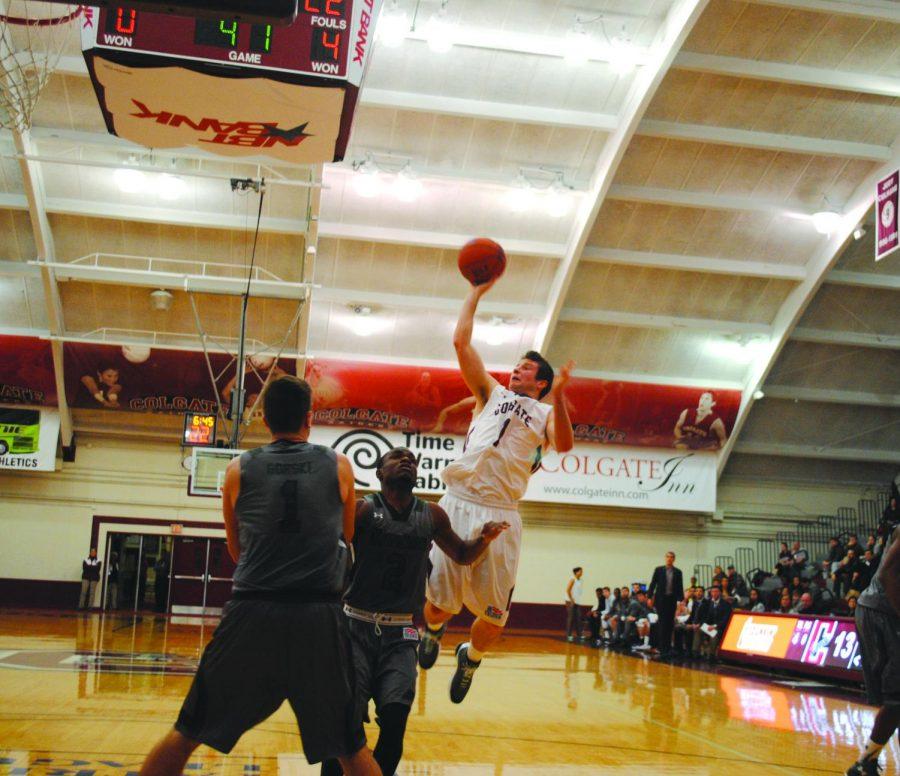 Senior guard Austin Tillotson scored 26 points against Lafayette; he has been the go-to offensive option for the Raiders all season.

The men’s basketball team had a rough week, suffering two losses to close out the regular season. The Raiders played at home on Wednesday, February 24 against the Lehigh Mountain Hawks, losing 71-54. Colgate then played on the road that Saturday, February 27, losing a heartbreaker to Lafayette, 79-77. With these two losses, the Raiders finish their season No. 6 in the Patriot League.

Against Lehigh, shots simply wouldn’t fall. Sophomore guard Sean O’Brien, senior guard Austin Tillotson and sophomore forward Tom Rivard each scored 11 points in the contest, however the entire team struggled as shots rolled around the rim, bouncing in and out. The Raiders only shot five free throws in the entire contest, relying heavily on their shooting, especially from behind the arc. The team was able to move the ball and get open looks, however, the ball refused to go in. Sophomore guard Jordan Swopshire, who is normally money from downtown, went 1-7 free three-point range, a microcosm for the individual shooting woes that the entire team suffered. In addition to creating open looks, Lehigh turned the ball over 16 times, which helped give Colgate added opportunities, but Colgate shot 33 percent from the floor. While the Raiders’ second half three-point shooting greatly improved to 45.5 percent, overall their 9-26 three-pointers fell short to Lehigh’s efficient 10-20 performance. Even greater than the statistic was the blow to confidence that occurs when quality shots rim out time and time again. Yet Colgate was able to fix their shooting woes in the next contest against Lafayette.

Next, Colgate faced off against Lafayette for their last home game, on Cotterell Court, winning 77-70. However, on the road this time the Raiders suffered nail-biter, 77-79.

Tillotson led the way offensively, scoring 26 points off 10-17 shooting from the field, adding seven assists to the stat sheet as well. Tillotson has been really producing as of late, averaging over 20 points per game over the last five contests. O’Brien also had a big game, scoring 19 points. O’Brien also has been great over the last five games, averaging 14 points, second only to Tillotson. Swopshire and Rivard helped fill up the stat sheet, scoring 11 and nine points respectively.

Colgate finished the first half up by two, 35-33. Swopshire had a great first period, shooting 3-4 from downtown to score nine of his 11 total points in the contest. However, Tillotson led the scoreboard with 11 points, going 5-10 from the field. This comes as no surprise considering that Tillotson has led the Raiders all season.

To start the second half, Lafayette jumped out to the lead, 36-35, hitting a three on the first possession. The lead then traded back and forth five times over the next four minutes, until Swopshire hit a jumper with 16:06 left, making the score 45-43. Colgate retained the lead for the next four minutes, until Lafayette senior guard Bryce Scott hit a three to make the score 57-56. Colgate again reclaimed the lead on the next basket and went on a run, going up by as much as eight points, 69-61, with less than six minutes left on the clock.

Lafayette battled back until finally snagging back the lead with 3:02 in the game, 73-72, off a made three from freshman forward Paulius Zalys. With two minutes left, O’Brien scored a bucket in the paint to make it 74-73. Lafayette immediately responded with sophomore forward Matt Klinewski hitting a short jumper, 75-74, 1:35 remaining. After fouling on both teams, the scored ended 79-77, a hard-fought game by both teams. Although they fell short, Tillotson and O’Brien were a dynamic duo in the second period, scoring a combined 29 of the team’s 42 points. Both were incredibly efficient: Tillotson went 5-7 for 15 points and O’Brien went 5-9 for 14 points. Despite these performances, the Raiders were unable to seal a victory.  When asked about the team’s upcoming Patriot League games, head coach Matt Langel offered some interesting insight on the approach the team would take.

“Our team has proven that over the course of the games in the Patriot League we are good enough to beat everyone else. Mentally, that’s where our players should be – focused, and confident in ourselves and the team. Our emphasis this week is simply on getting our group to prepare for just that. To play our best basketball, and win a one game tournament three consecutive times. After seven months of work, we won’t drastically change anything strategically we do, but instead focus on executing well on both ends of the court,” Langel said.

The Raiders face their first Patriot League opponent, Army, at West Point this coming Thursday, March 3rd, at 7 p.m. Hopefully they can mentally wipe the slate clean and produce come playoff time. The game can be live streamed on the Colgate athletic website and might be broadcasted on television.