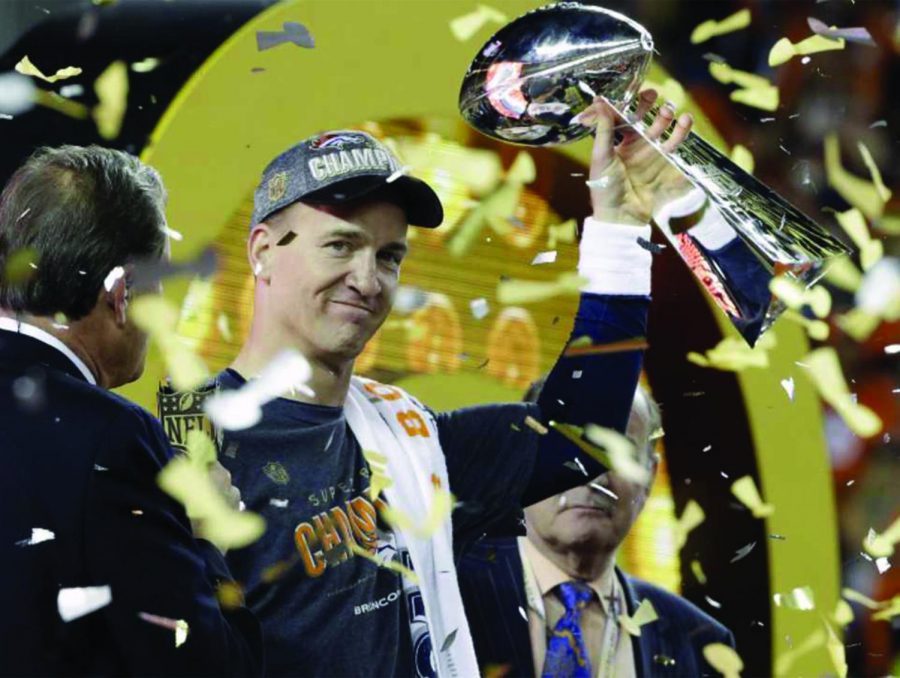 “The Sheriff” Peyton Manning poses with the Lombardi Trophy following the Broncos’ Super Bowl 50 victory. Manning has yet to announce a decision regarding his retirement.

I know your decision about retirement is one you have changed your mind about many times before and will probably change again in the coming weeks. But from myself, and NFL fans around the country, we all ask that you please retire and end your incredible NFL career on a high note with a Super Bowl victory.

This past season was not your finest work as a professional quarterback to say the least. Plagued by injuries and benched midway through the season for Brock Osweiler, a late-season disappointment from the man who replaced you was one of the only reasons you found your way back on the field for Super Bowl 50. Your performance was vintage, strategically picking apart a Panthers secondary many thought was the best in the NFL this season. Aided by the unbelievable performance from the Broncos defense, you found yourself lifting the Lombardi Trophy for the second time in your career, and the first time as a member of the Denver Broncos. Personally, I can’t think of a better moment to end your storied NFL career than raising a trophy signifying your team’s victory as the last whistle ended your 18th season in the league. Many others have done it before you, so why shouldn’t you?

The man who has been instrumental in your late career revival was one of the first to do it. After the Broncos’ victory in Super Bowl XXXIII, John Elway retired prior to the start of the following season. Elway would retire a champion, and did not want to see his career potentially plummet and tarnish his reputation as an all-time great quarterback. Elway had the difficult decision to make, but took the proper time to consider all angles and eventually retired in early May before the next season started.

It was unfair of Jim Nantz to put you in the spotlight with all the questions following your team’s Super Bowl 50 victory. You handled the questions eloquently, politely declining to make a rash decision and instead opting to celebrate the incredible victory with your teammates (and a few Budweisers.) However, the time has come for “The Sheriff” to ride off into the sunset as one of the all-time greats.

Aside from your mentor and friend Elway, look no further than other NFL greats Jerome “The Bus” Bettis and Michael Strahan who both hung up their cleats after Super Bowl victories. Bettis famously announced his retirement while holding the Lombardi trophy following the Steelers’ victory in Super Bowl XL, and many commended him for the timing of his retirement. Bettis, a man who rushed for over 1,000 yards eight times in his storied career, struggled mightily in his final season with the Steelers, but walked off the field as a champion thanks to the help from the supporting cast around him. Bettis saw his career and productivity coming to a close, and saw the opportunity to walk away as a champion. Similarly, Michael Strahan’s New York Giants pulled off one of the all-time greatest upsets in Super Bowl history, defeating the previously unbeaten New England Patriots in Super Bowl XLII and bringing the Lombardi trophy back to New York. Strahan was a force that season, leading a Giants defense that not only terrorized Tom Brady in that fateful Super Bowl, but also opponents all season long. Strahan’s 45 tackles and nine sacks were instrumental in the Giants’ success that season, similar to the importance of your 2,249 yards and nine touchdowns this season.

Elway, Bettis and Strahan all contributed to their teams’ Super Bowl victories and helped their season along the way. Peyton, your 17 interceptions during the regular season were enough to see you sent to the bench, and before a late season return to the field, media who had praised you throughout your career suddenly had turned their back on you. They said you were washed up, unable to throw deep and overall negatively contributing to your team.

The time has come, Peyton, and after wowing fans for 18 seasons with your leadership on the field, your precision passing and your overall demeanor as one of the all-time great quarterbacks, it is time to hang up the cleats. We heard you through the televsion scream “Omaha” time after time, but now it’s time for you to hear us: Please retire, Peyton.