Women’s Tennis Goes 3-1 in Matches Over Break: Next Up, Raiders Travel to Lehigh 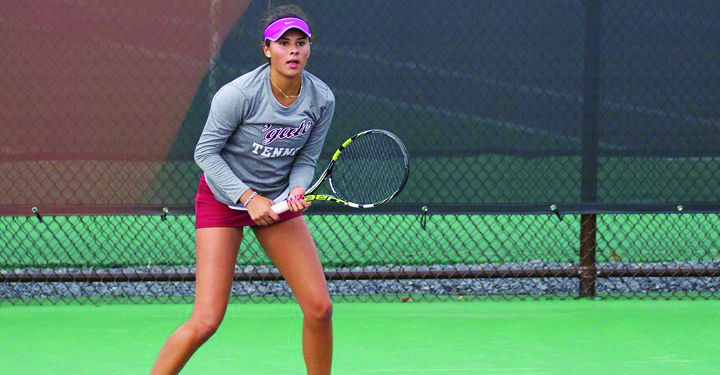 First-year Lauren Hyland, with the help of her doubles partner senior Jennifer Ho, was successful in taking on the top pair for Holy Cross in what would lead to a 6-1 Colgate victory over the Crusaders.

Over spring break, from March 11-19, the women’s tennis team played a total of four matches. Three losses and one win brought the team’s season record to 6-6 while their Patriot League record begins at 1-0.

The Raiders kicked off their break against Siena, playing away in Latham, N.Y. Colgate suffered a tough loss against the Saints, falling 7-0. The Saints claimed every match except for one. Junior Hannah Fleckenstein and sophomore Cheyenne Brown pulled out a win against Siena’s No. 3 doubles team, 7-6 (5).

Next up for Colgate was another away match against the New Jersey Institute of Technology (NJIT). The Raiders battled hard against the Highlanders, but were unable to secure a victory, losing 5-2. NJIT came out strong, winning the No. 1 and No. 2 doubles matches. The No. 3 doubles match was left unfinished, but the Highlanders still gained the 1-0 lead.

Next, the Raiders faced Hofstra University in Oceanside, N.Y. The matchup brought another tough loss for Colgate, as Hofstra won 6-1.

The Pride quickly took the lead, winning all three doubles matches. With the 1-0 advantage, Hofstra won five out of six of the singles matches. Hyland prevented Hofstra from getting a clean sweep with her victory at No. 1 singles 6-1, 6-4. Having so many matches in a row can become mentally and physically draining for the team. According to senior co-captain Katie Grant, staying at full energy and intensity levels during practice is key.

“Practices right now are all about maintaining our level. At this point in the season everyone is match ready and playing at their best, so it’s just important to use practice as a time to stay sharp for our biggest matches. It’s also equally important for us to rest when we can during the week and get into the training room to take care of any injuries since staying healthy right now is the goal.”

Junior Kaelin Brittin added to Grant’s point, saying they currently have a lot of injured players, however, they are working on getting healthier. Brittin also feels that practice is a good opportunity for the team to continue working on their fundamentals.

“We work on improving by focusing more on fitness, ability and footwork,” Kaelin said.

Colgate finally began the Patriot League portion of their schedule with a win over Holy Cross at the Paxton Sports Centre. The Raiders were undefeated in all doubles matches and continued on with their momentum for singles. Holy Cross was only able to take the No. 2 singles spot when Allison Reiling beat senior Jennifer Ho.

While thinking about important matches over break, Grant felt that Holy Cross definitely stood out.

“[Holy Cross] was our first conference match of the season and you want to make a strong statement to the other Patriot League teams that you’re going to be a threat going forward. We were pumped to beat Holy Cross so convincingly and are looking forward to keeping up that winning streak going into the next three weekends.”

Brittin commented on the transition into Patriot League play.

“A Patriot win is way more important to us because it plays a role in what our Patriot League standing will be. If we have a better ranking then we will be a higher seed in the tournament,” Brittin said.

The Raiders hope to build off of this first Patriot League win in their next match against Lehigh University. The rivals will face off on Lehigh’s turf on April 2 at 10 a.m.