Men’s Hockey Gets Win in Last Game at Starr Rink 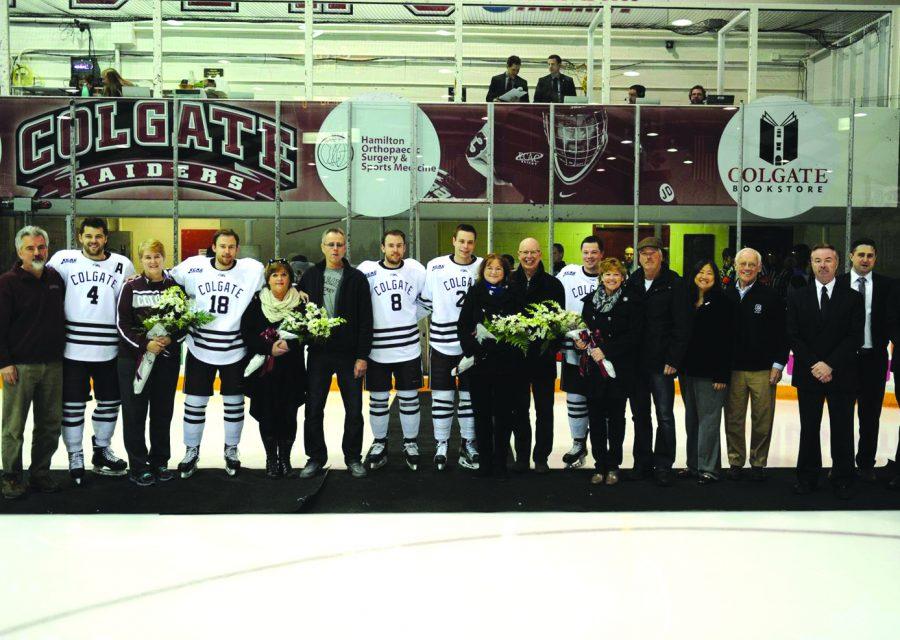 Prior to the Raiders' final  game at Starr Rink, the class of 2016 was honored for their accomplishments.

The Raiders finished their season strong, with wins over No. 17 RPI and Union in their final two regular season home games at Starr Rink. Senior forward Tylor Spink scored two goals in the first period and junior Charlie Finn made 25 saves to lead Colgate to a 2-0 shutout victory over No. 17 RPI.

Colgate took a 1-0 lead early as Spink beat Engineers keeper Jason Kasdorf with a shot upstairs off a feed from his twin brother Tyson.Tylor Spink found the net for the second time in the period, beating Kasdorf from close range on a feed from his brother for his 11th goal of the season.

That would be all the support Finn would need as he recorded his first shutout of the season and the eighth of his career, moving him into a tie for second place on the program’s career shutout list. The North Vancouver, B.C., product made six saves in the first, turned away a game-best 14 shots in the second and recorded five saves in the third. Kasdorf finished with 23 saves between the pipes for RPI.

“It’s been a tough year when its comes to [giving up the first goal]. We had some momentum early and we really took advantage of that. I thought the Spink twins played really well in the first period. Obviously, [Finn] saw the puck well tonight. RPI is resilient, they came at us hard and we found ways to keep pucks on the perimeter and get a badly-needed win,” Raiders’ head coach Don Vaughan said.

Colgate’s blue line play has improved significantly in the month of February, allowing them to control time of possession and limit their shot differential. As of the end of January, opponents outshot the Raiders 31.7 to 26.4, an average of 5.3 shots per game this season. That seasonal margin has dropped significantly, to 28.17 to 27.7, an improvement of 4.83 shots per game.

“We’ve been playing good hockey lately. We were fortunate to get a couple bounces tonight, play really solid defensively and pot a couple of goals early. It certain helps playing with a lead,” Finn said.

Their strong play continued against Union on Saturday, as junior defensemen Jake Kulevich scored with a man advantage late in the second period to break a 1-1 tie and lift Colgate to a 2-1 victory.

Kulevich scored what will be the last regular season goal in Starr Rink, as the win against RPI closed out the historic 56-year-old home. Colgate moves into the brand-new Class of 1965 Arena for the start of the 2016-17 season.

“It’s definitely awesome, [scoring the last goal]. Starr Rink has so much history; so many great players have come through here; it’s neat to go out that way. It’s really special,” Kulevich said.

Kulevich’s decisive tally came on a 4-on-3 power play, as senior defenseman Kevin Lough played the puck to Kulevich at the top of the point, where he fired a quick snap shot that beat Union keeper Jake Kupsky for his fourth goal of the season.

Finn made Kulevich’s man-advantage tally stand up, stopping 33 of the 34 shots faced during the contest. Although the Raiders have not had their best season from a record standpoint, Finn has been absolutely crucial to the success the Raiders have had. He will definitely need to keep up his high level of play as the Raiders head into post-season ECAC play. When asked what went well in the Union game and about the Raiders’ post-season strategy, Vaughan had some insightful comments.

“I thought we played particularly well defensively today, probably one of our better defensive games. They always say defense wins championships and Charlie’s obviously seeing it well right now. Rolling into the playoffs with a couple of big wins at home and to go out in our last game with a win, I could not be happier for our guys,” Vaughan said.

The Raiders are the No. 10 seed for the 2016 ECAC Hockey Tournament and will play Dartmouth in the first round of the event next weekend. The Raiders lost to the Big Green 3-2 earlier this season and are looking for redemption. The best-of-three series begins March 4 at Thompson Arena in Hanover, NH. The Raiders need to seriously capitalize on this two-game winning streak and carry as much momentum into post-season play as they can. Game times and other game information have yet to be determined, but information will be posted on the Colgate athletic website as soon as it becomes public.