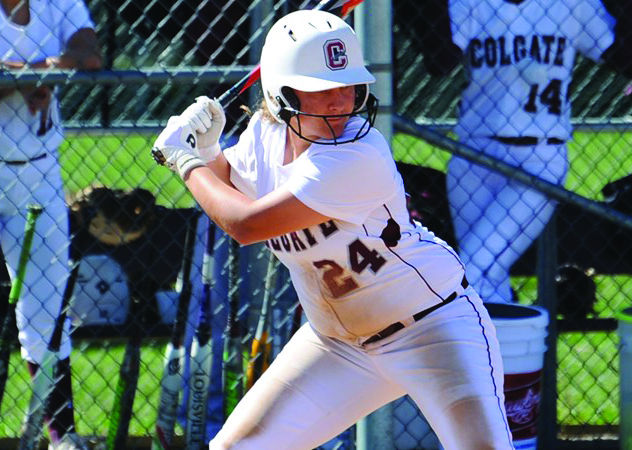 The Colgate softball team has had a very eventful couple of weeks coming off of a tough five-loss season opener tournament. Since then, the Raiders have improved to an overall 3-14 record. While their record might not show it, the team has had many close matches over the past three weeks.

After taking a week off from competition prior to spring break, the Raiders traveled all the way out to sunny California for another tournament at UC Davis. While three out of their four games were canceled, the fourth game, against Seattle, proved to be a decisive Colgate victory. The Raiders came away from this match with a 3-1 win over Seattle, with a stellar performance from senior pitcher Brigit Ieuter, who recorded her first full game on the mound. This was an important victory for the Raiders, not only because it was their first win since their five-loss streak, but also because it was their first win in California and it set the tone for the remainder of their trip. Head coach Melissa Finley had some very interesting insight on this game.

“The team stepped onto the field with a common purpose today and it showed. Every single person came to play and I was really impressed with our defensive performance,” Finley said.

As the Raiders made their way around the rest of California during the break, they played a total of five more games before heading over to the Santa Clara Tournament. Out of those five games, the Raiders faced the likes of Saint Mary’s, Pacific University and San Jose State University. While the Raiders put up a good fight against the first two teams, they were simply outplayed in all facets of the game against San Jose State. Although the Raiders might have established a winning mentality at the end of the Seattle game, that flame was quickly extinguished when they faced these three teams.

When it came to the Santa Clara Tournament, the Raiders started off very well, winning two crucial games against host Santa Clara, 4-3, and Iona 4-0. The Raiders demonstrated their winning capability against both of these tough teams. In the huge shutout victory against Iona, stellar performances were had by junior outfielder Katie Bushee and sophomore third baseman Holly Geranen. Both finished the game with an impressive three runs. Finley shared some positive sentiment after the huge shutout victory against Iona.

“It was great to see the team bounce back and compete today. They played with passion and even though we made it a little tough on ourselves in the first game with a couple of defensive miscues, we were able to make it up with the bats, thanks to a few people having big days at the plate,”

“We learned a lot this trip and played a lot of games in a short amount of time. This team battled and even though we didn’t always get the outcomes we wanted I think they know what they need to do moving forward to be successful,” Finley said.

Returning to the East Coast, the Raiders only had a week to recuperate and get adjusted to the unpredictable and much colder climate of New England before heading down to Princeton University for a double header. Unfortunately the Raiders lost both of these games, 7-4 and 9-6, respectively.

This weekend, the Raiders host Army on their home turf for another double-header. Hopefully the team can shake off these past couple of losses and play the high level of softball that people know they are capable of playing. The Raiders take the field at 12 p.m. both Saturday and Sunday. Although the weather might not be ideal for softball, both should be interesting games; more importantly, they are critical games if the Raiders want to turn their season around.