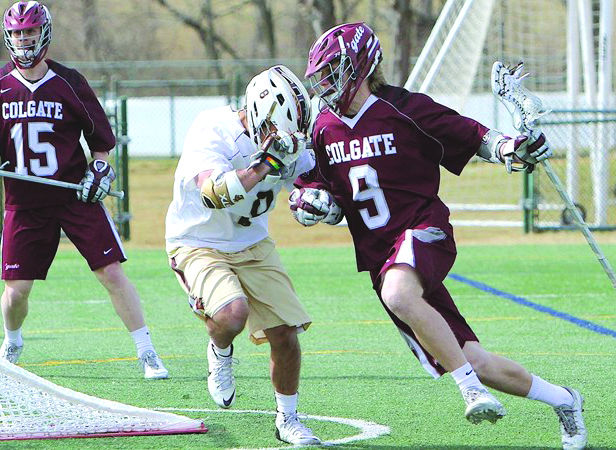 Sophomore attacker Chase Wittich recorded three goals and two assists, taking part in over half of the Raiders’ total goals.

The men’s lacrosse team was defeated 12-9 by the Lehigh Mountain Hawks in Bethlehem, Pa. this past weekend. The loss moves the Raiders to 2-2 overall and 0-2 in the Patriot League. Despite the loss, sophomore attacker Chase Wittich notched his second career hat-trick while adding two assists to tie his career high with five points in the game.

The Raiders took their first lead of the game with just over three minutes remaining in the first quarter when Wittich tallied his first goal of the game. Lehigh would score three goals in the final 2:17 of the first quarter to jump out to a 4-2 lead at the end of the period. Unfortunately, the Mountain Hawks would never relinquish the lead. Lehigh would race out to a 7-3 halftime lead and midway through the third quarter, they would extend their edge to 9-4.

A resilient Colgate team would make it a game by scoring three quick goals in the final 2:25 of the third quarter. Sophomore attacker Joe Delaney, first-year attacker Sam Cleveland and Wittich would make the game 9-7 going into the fourth quarter. With 7:37 remaining in the game, Lehigh would add their tenth goal of the game to take a three goal lead on the Raiders. But senior midfielder Cam Williams and Cleveland would score goals just 35 seconds apart to cut the deficit to 10-9 with 6:17 remaining in the fourth. Despite the hope to tie the game on a 30-second man-up opportunity with 6:06 to play, the Raiders would fail to find the back of the net again and Lehigh would add two late goals to defeat the Raiders 12-9 in each team’s second Patriot League contest of the season.

Despite being outshot 40-31 by Lehigh, Williams and Cleveland would also add two goals apiece for the Raiders. Wittich’s three goal effort gives him nine goals on the season, and he has scored at least two goals in each of the team’s four games this season. He made the most out of his scoring chances, putting home his three goals on just four shots. Also of note was junior goaltender Brandon Burke’s 12 save effort, his highest total on the season, bringing his season total to 39 for the Colgate goalie.

Of concern for the Raiders was the virtual absence of sophomore attacker Anthony Abbadessa. After netting four goals against Bucknell on March 1, Abbadessa was named the Patriot League Offensive Player of the Week. He would tally just a single assist in the game against Lehigh. Undoubtedly, the 2015 Patriot League Rookie of the Year’s production will be key to the success of this Colgate team down the road.

The Raiders will continue their road trip with a game against Boston University on Saturday, March 12. Colgate was defeated 18-11 by the Terriers in Hamilton last season. If the Raiders can steal this win on the road during a tough stretch of their season, Colgate will be faced with four winnable games at home that could provide them with some momentum for the homestretch of their season. Depending on how you look at it, the lacrosse season being short can either be viewed as a plus or a minus. Given the Raiders are now at roughly .500 for their overall season record, they are now at a decisive moment. These next couple of games are very important in the trajectory the Raiders’ season takes. It all starts with a big win over Boston University this coming Saturday.