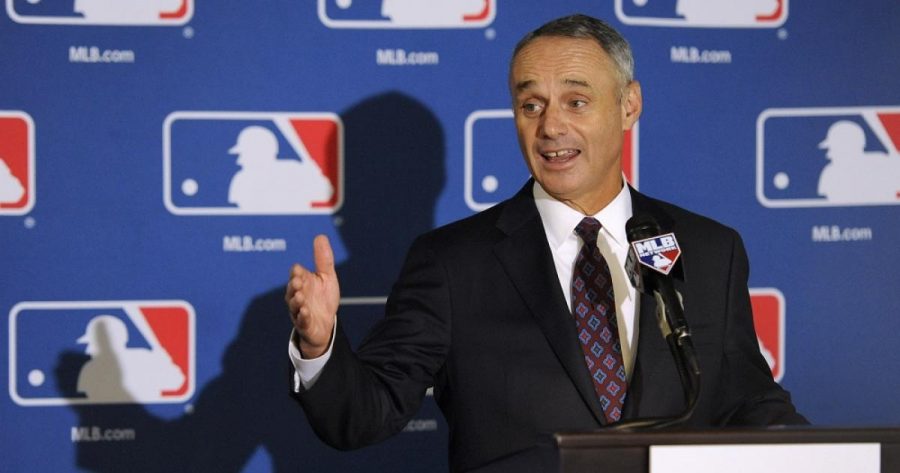 As members of the Class of 2016 begin to experience the first of their “lasts” as the spring semester enters into its final month, details of Commencement Weekend also begin to emerge. The administration recently announced that Commissioner of Major League Baseball Robert D. Manfred will deliver the commencement address during 2016 Commencement Weekend, which will take place on Saturday, May 14 and Sunday, May 15. 2016 Baccalaureate speaker and honorary doctorate degree recipients were also released to the Colgate community.

In order to select both the speakers and recipients of honorary doctorate degrees, the Board of Trustees assembles a committee consisting of the President of the University, trustees, elected faculty members and the President of the Class of 2016. Members of the committee, as well as the Colgate community at large, collaborate to nominate potential candidates.

“We distribute our honorary degrees, including the speakers, to include figures in public life, scholars, business leaders and professionals. We seek speakers whose messages will, we hope, be meaningful to the graduates and their families,” Harsin said.

Commissioner of Major League Baseball Robert D. Manfred will deliver the commencement address to the graduating class of 2016. Manfred assumed the position of commissioner on January 25, 2015. Prior to this appointment, Manfred dedicated the last 28 years of his professional career to MLB, holding various positions within the organization including Executive Vice President for Labor Relations & Human Resources, Executive Vice President for Economics & League Affairs and most recently serving as Chief Operating Officer. On behalf of MLB, Manfred has positively contributed to both legal and financial matters as well as health initiatives within the organization.

Manfred began his undergraduate degree at LeMoyne College and graduated from the School of Industrial and Labor Relations at Cornell University in 1980. He then earned his JD from Harvard Law School where he graduated magna cum laude in 1983. Manfred is an active member of the Labor Section of the American Bar Association, College of Labor and Employment Lawyers and the Massachusetts and D.C. Bar Associations. Manfred has also been the recipient of many awards recognizing his legal achievements, including but not limited to being named Labor Counsel of the Year by the Association of Media and Entertainment Counsel in 2008. Manfred’s daughter, Mary Clare Manfred, will be graduating with the Class of 2016.

“Manfred is a nationally known figure, a frequent public speaker, a respected attorney and executive who, as Baseball Commissioner, has put forward an impressive slate of initiatives,” Harsin said.

Upon hearing the announcement regarding the chosen commencement speaker, members of the senior class also expressed their excitement.

“As a baseball fan, I was excited to hear Rob Manfred announced as our commencement speaker. His professional background in both law and sports I’m sure will lead to a riveting talk,” senior Cameron Kline said.

“I love that our graduation speaker is a parent of a member of our class. I’m also excited to hear any advice he has for our class, even if we aren’t going into the sporting industry,” senior Issy James said.

“It’s exciting to have a high profile commencement speaker such as Robert Manfred to be the pinnacle of four years here at Colgate. Furthermore, it speaks highly of the Colgate network that it is the father of a current senior who will be speaking,” Thompson said.

On Saturday, May 14, the first day of 2016 Commencement Weekend, Director of Islamic Studies Center at Duke University Omid Safi, will deliver his address at the Baccalaureate Service. Previously, Safi taught in the departments of Philosophy and Religion at Colgate. In 2010, Safi was awarded the Sitterson Teaching Award for Professor of the Year. He has published many works focusing on Islamic history and politics, namely Progressive Muslims: On Justice, Gender and Pluralism and Voices of Islam: Voices of Change.

Manfred and Safi are among those who will receive honorary doctorate degrees at this year’s commencement ceremony. Recipients will also include Richard Clarke Cabot Professor of Social Ethics at Harvard University Mahzarin Rustum Banaji, Jonathan Trumbull Professor of American History at Harvard University Nancy Cott, Colgate University Trustee Emeritus and former Board Chair Denis Cronin, and Co-founder of the Gerrit Smith Estate and the National Abolition Hall of Fame Dorothy “Dot” Willsey.

Harsin highlighted how all of the chosen honorary doctorate degree recipients have, within their respective professions, been committed to promoting inclusion and understanding, two themes that have been of particular contemporary social relevance both on and off campus.