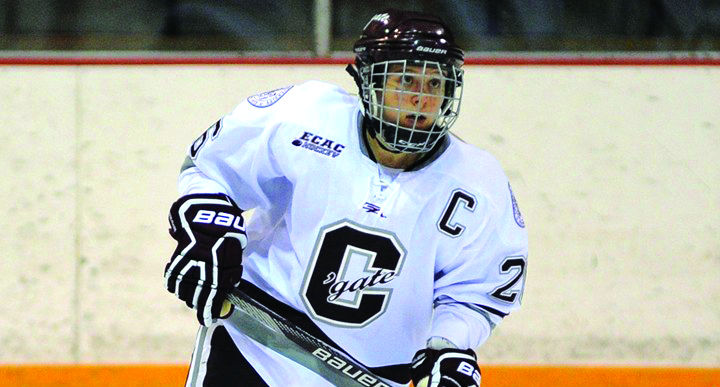 Junior captain Cat Quirion scores a decisive goal for the Raiders in the tilt against Yale; Colgate was able to secure a shutout against the Bulldogs, giving the Raiders a confidence boost as they went into their game against Brown.

Last weekend, the women’s ice hockey team was back on the road, traveling to New Haven on Friday evening to take on the Yale Bulldogs, a game which Colgate won 2-0. The next day, the Raiders faced a quick turnaround when they traveled to Providence to take on the Brown Bears, which gave them their second win of the weekend when the game concluded with a score of 3-2. At the weekend’s conclusion, the team’s record stands at 19-6-7 overall, which is especially notable because this season now marks the second in the team’s Division I history where they recorded 19 wins, the first occasion being the 2008-2009 campaign. Furthermore, the team’s ECAC record moved to 11-4-5.

Friday night’s competition proved to be a good matchup, as the game remained scoreless for the first two periods, with both teams fighting to make headway. Finally, in the thirteenth minute of the third period, Colgate got on the board when junior defender Cat Quirion scored following an assist by first-year forward Shae Labbe and sophomore forward Annika Zalewski. The goal was Quirion’s third of the season. In the twentieth minute of the period, the Raiders lengthened their lead when first-year forward Jessie Eldridge scored an empty net goal, which brought her tally for the season to nine. Another notable performance was that of senior goaltender Ashlynne Rando, who had 32 stops throughout the game, which was her fourth shutout of the year. Head coach Greg Fargo had some powerful insight on the game.

“Tonight was a quality win against a very good team in Yale. We survived the first period, got some great goaltending all night and we got better as a group as the game wore on,” Fargo said.

The next day, the Raiders travelled to Providence to take on Brown. Colgate came out of the gate strong, getting on the board in the sixth minute when first-year forward Shannon Ormel scored after being assisted by first-year defender Chelsea Jacques and first-year defender Olivia Zafuto. This would be the only goal of the period. In the second minute of the second period, the Raiders lengthened their lead when senior defender Lauren Wildfang scored off of an assist from Eldridge. In the twelfth minute of the period, the Bears finally got on the board when first-year forward Bridget Carey found the back of the net, with the assist going to sophomore forward Sam Donovan. Colgate fought back in the sixteenth minute of the period when sophomore forward Shelby Perry scored for the Raiders, bringing the team their third and final goal of the game. In response, Brown continued to play with great fervor, with their efforts coming to fruition in the seventeenth minute when junior forward Maddie Woo scored on a power play, with the assist going to Donovan and senior defender Kelly Micholson. However, as the contest moved into the third period, neither team was able to score again, and the final tally was 3-2, with the victory going to the visiting team. With this being their nineteenth win, the Raiders made history for the second time in the program’s Division I history.

Next week, Colgate will finish out its regular season when they host Harvard Friday night at Starr Rink, and Dartmouth the following afternoon. The Dartmouth game will also serve as the team’s senior day, during which they honor the team’s three seniors before moving on to postseason play.