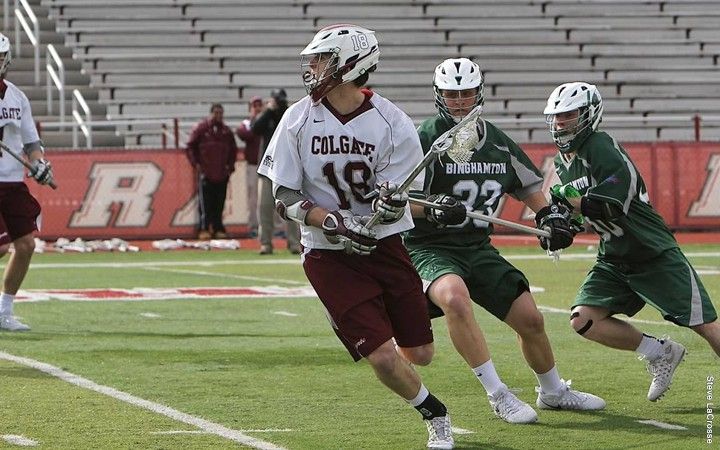 The men’s lacrosse team defeated the Binghamton Bearcats 11-4 on Saturday to earn their first win of the season. First-year attackman Sam Cleveland scored his first career hat-trick to lead all scorers. Colgate’s offense was effective across the board with sophomore attackman Anthony Abbadessa, sophomore attackman Chase Wittich and senior midfielder Eric Foote each tallying two goals a piece for the Raiders. Senior midfielders Tyler Rigo and Cam Williams also scored for Colgate.

Colgate’s stout defense held the Bearcats to just one second half goal after holding a 6-3 lead going into halftime. Junior goalie Brandon Burke made nine saves. The Raiders defense forced three turnovers, and Colgate won the turnover battle 15-10. Despite losing the face-off and ground ball battles, Colgate was able to outshoot the Bearcats 35-32.

The Raiders scored the first three goals of the game as well as the game’s final five scores. After losing a thriller to the Michigan Wolverines in Ann Harbor last weekend, the Raiders were able to capitalize on their team play. Cleveland, when asked about his six-point outing, expressed the team’s ability to correct the mistakes that plagued them at Michigan.

“It was fun. We worked hard in practice this week. We struggled at Michigan working together as a team, but we came together in practice and really worked on moving the ball as a unit. The shots came to me and I liked it.”

In head coach Mike Murphy’s fifth season as head coach of the men’s lacrosse team, expectations have definitely been raised. The 2015 team not only tied for the regular season Patriot League Championship, but also went on to win the conference tournament and receive a bid in the NCAA tournament for just the third time in program history. That team finished ranked No. 14 in the final coaches poll at the end of last season. The 2016 Raiders have begun the season unranked. However, this has not hampered expectations for the team. When asked about his team’s performance and ensuing goals for the season, Murphy stressed patience.

“We’ve got a long way to go as we get ready for Patriot League play, but I’m glad our guys got their first W of 2016.”

The Raiders were picked to finish third in the Patriot League this season. Colgate will undoubtedly lean on the presence of their veteran goalkeeper as the season goes on. Burke is a preseason all-league goalie who is quietly climbing the ranks towards the career saves record at Colgate. With the early emergence of Cleveland and the return of 2015 Patriot League Rookie of the Year Abbadessa, paired with preseason all-league midfielder Williams and junior midfielder Peter Donato, the Raiders have the ability to fill the shoes of Ryan Walsh who graduated last season.

The men’s lacrosse team will continue its home campaign against its first Patriot League opponent when the Bucknell Bison will travel to Hamilton to face the Raiders at noon this Saturday. Despite the Bison owning the overall head-to-head record at 21-16, Murphy has dominated the Bison, going 6-1 in his head coaching career. In their most recent matchup, Colgate defeated Bucknell 18-5 in the semifinals of last season’s Patriot League tournament. Colgate will begin Patriot League play in hopes of defying expectations once again.