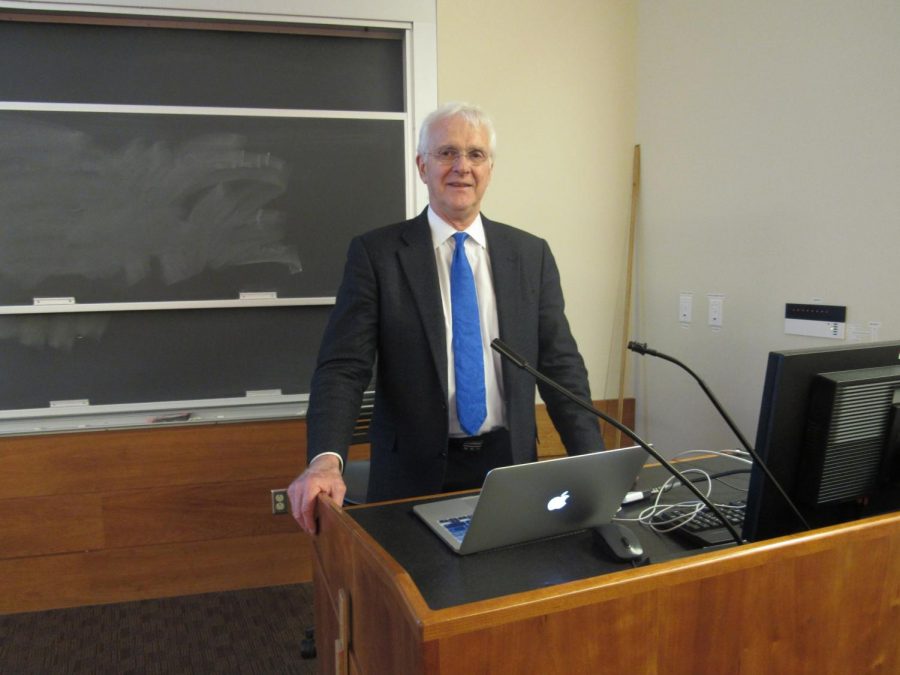 Professor David K. Campbell presents on the importance of non-linear science in the mathematical and physical world.

On Friday, February 5, Colgate’s Academic Honor Society Phi Beta Kappa sponsored a lecture given by Boston University Professor of Physics David K. Campbell entitled “Nonlinear Science: From Paradigms to Practicalities.” As one of the founders of the peer-reviewed journal Chaos: An Interdisciplinary Journal of Nonlinear Science, Campbell is an expert in nonlinear science, a subject that has gained public attention in the last 40 years following the rise of interactive graphics and new analytic methods such as nonlinear stability and high precision measurements of natural phenomena.

To begin his lecture, Campbell

“Almost every phenomena in nature is actually nonlinear so by definition [nonlinear science] is actually the study of everything,” Campbell said.

More specifically, however, nonlinear science in the mathematical and physical world addresses chaotic motion, self-sustaining oscillations and the failure of superposition found in nature. Campbell elaborated on this definition by explaining a vital and familiar nonlinear dynamic system: the human heart. In an interactive demonstration, Campbell presented four images of heartbeats on the screen, each with a distinct pattern of oscillations.

“Which of these images represent a healthy human heart?” Campbell asked the audience.

Two of the images showed consistent, predictable palpitations, both of which, Campbell explained, were representative of heart failure. The image with the most erratic and inconsistent oscillations represented a healthy human heart. As Campbell explained, variability in heart rate is critical to our ability to adapt to different stresses. In fact, we rely on defibrillators to shock a constant, linear heart rate back into an erratic, chaotic rate. Ultimately, if the human heart functioned as a linear system, our first exposure to stress would end our lives.

Later in the lecture, Campbell outlined Ueda Lorenzo’s concept of “strange attractors,” which Campbell explained as a type of motion that never comes back to exactly the same point. Pluto’s chaotic moons represent a natural example of this phenomenon, since they unpredictably rotate around their axis in a wobbly and chaotic manner. Campbell suggested that a human living on Pluto would never be able to accurately predict when and in which direction the sun would rise

because of the nonlinear orbitals of

Junior Leeza Reyzin attended the lecture, and was particularly impressed by Campbell’s discussion of Pluto.

“It’s crazy to think that you would not be able to keep track of the days if you lived on Pluto,” Reyzin said.

Campbell concluded his lecture with a discussion of the practical uses of understanding solutions – waves that preserve their amplitude, shape, and velocity following collisions with other waves. Knowledge of these coherent structures have allowed scientists to control pollution in California’s Monterey Bay, assisted in cleaning up the Deep Horizon Oil Spill and been used to develop practical fiber cables. Solitons, a self-reinforcing solitary wave, are also fundamental in the physical nature of tsunamis, the Red Spot of Jupiter, and even waves on a beach.

“Here we have these incredibly complex structures that the general population has never heard of, and they’re

For a rather intimidating subject that most shy away from, Campbell has proven the prevalence, practicality and increasing popularity of nonlinear science. As Campbell stated in his lecture, further investigation into this study will provide a few answers among many more questions.