Colgate Suffers 64-56 Defeat to American: Raiders Look to Turn Around Season Against Crusaders 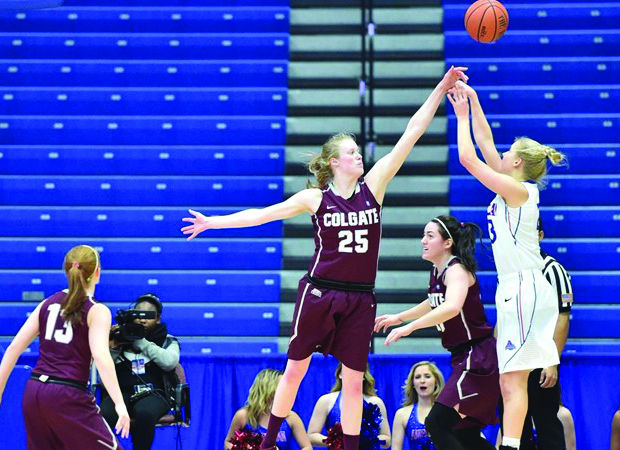 Senior captain Josie Stockill tallied 19 points and five rebounds against American; the Raiders still fell to American for the second time this season.

The Raiders traveled to Washington, D.C. this past weekend to take on the American University Eagles at Bender Arena. With both teams sitting on a 2-6 record in Patriot League play, this was a great opportunity for the Raiders to make up some ground in the standings and bounce back from a tough loss they suffered against Loyola in their previous game. While the game was neck-and-neck for about 40 minutes of play, the Raiders were unable to push ahead in the final minutes, and ultimately fell to the Eagles, 64-56.

The Raiders came out of the gate quite sluggish, getting down 9-2 early in the first quarter due to a few careless possessions that resulted in turnovers. Colgate clawed its way back into this one, however, catching the Eagles off-guard out of timeouts throughout the game. Credit head coach Nicci Hays Fort for her willingness to change defenses throughout the game. Almost consistently throughout the game, the Raiders reverted to a 2-3 zone defense following a timeout to thwart whatever set plays the Eagles might have drawn up against the usual man-to-man defense the Raiders played the majority of

“We were switching up the defenses and trying to take American out of their offensive flow” senior forward Josie Stockill said.

One positive Colgate can take away from this game is the even distribution in scoring, with four players hitting double figures. Junior guard Katie Curtis accounted for 12 points, while Stockill, sophomore guard Ariel Etheridge and senior guard Paige Kriftcher each poured in 19, 11 and 10 respectively.

Much of the story for the game revolved around the chess-match that opposing coaches have played with Hays Fort in regards to what offense to run with and without the nation’s leading shot-blocker, Stockill, on the court. Stockill has averaged just over four blocks per game this year, and it is apparent when watching the game just how much of an impact she makes in the paint. The Eagles settled for three-pointers for much of the 30 minutes Stockill was on the court, but took full advantage of loss in size the Raiders endure when powerhouse Stockill takes a rest. This proved to be a big weakness for the Raiders.

Even with Stockill off the floor, however, the Raiders did a good job boxing out and controlling defensive rebounds.

“We worked hard in practice on being tougher than our opponent and had a specific focus on out-rebounding American” Stockill said.

On the other side of the court, the Raiders  had success penetrating the Eagles’ defense for much of the game. Kriftcher consistently got past her defender throughout the second half, and made a few pull-up jumpers from 10 feet out in the second half when the Raiders needed buckets.

Another area the Raiders did excel in was free-throw shooting. The Raiders shot a very solid 16 of 22 from the line.

For Colgate, however, the offense cannot wait for senior guard Randyll Butler to return from injury. While the Raiders were able to hang within three to five points for most of the game, when the Eagles went on a run late in the fourth the Raiders were unable to create answers. Hopefully, with Butler’s return, the Raiders can finish off close games like this one with a W.

The Raiders hope to end their losing skid this Saturday at 4 p.m. when they host the Naval Academy at Cotterell Court. The Midshipmen are 10-10 overall this season, and defeated the Raiders 51-41 earlier this season in Annapolis. As the postseason approaches it will be vital for the Raiders to do a better job closing out games.