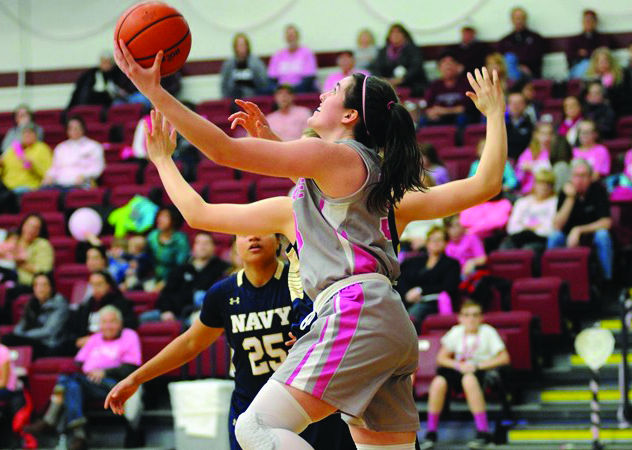 Sophomore forward Julia Barcello tallied a total of six points against Navy in what was eventually a close Colgate loss.

The women’s basketball team lost twice this past week, falling to Holy Cross on Wednesday and Navy on Saturday.

Against the Crusaders, the Raiders fell by a score of 70-61 in Worcester, Massachusetts. This loss extended the Raiders’ losing skid to three.

“We are really looking forward to taking on our rivals Holy Cross this week,” senior forward Josie Stockill said earlier last week while gearing up to take on the Crusaders. Unfortunately for the Raiders, they were seriously outrebounded 45-33. This nullified the Raiders’ excellent 47 percent shooting from behind the arc, as the Crusaders were able to get second opportunities throughout the game.

In front of a home crowd of nearly 1,000, the Raiders fought hard against a Navy team that previously bested the Raiders by 10. The Mids still managed to pull this one out, albeit just barely with a final score of 62-58. The Raiders were able to generate 17 more points this time around, but ultimately this came at a sacrifice on the defensive end, as they also surrendered 11 more points.

While Colgate ultimately stayed neck-and-neck with the Mids for the entire game, the two difference makers were three-point shooting and rebounding. The Raiders continued their dominance on the free-throw line, shooting an incredible 84 percent compared to the Mids paltry 36 percent, but the Raiders could not buy a three-pointer for the majority of the game, shooting a disappointing 19 percent from behind the arc. It should be noted, however, that when it did matter, Stockill was able to drain one from downtown late in the fourth quarter when points were at a premium.

Navy was able to overtake Colgate in the fourth because of their persistence in crashing the boards. With a narrow two point lead, the Raiders offense stalled, just as the Mids hit a rhythm. An 11-1 run ultimately did the Raiders in, as second chance opportunities piled up with Navy’s relentless pursuit on the offensive glass. The 45-31 disparity in rebounds is probably the best statistic to visualize Navy’s dominance of the glass. Again, this was a game where the Raiders really missed having senior guard and ballhawk Randyll Butler to gather up loose rebounds. To supplement the Raiders rebounding needs, sophomore forward Julia Barcello stepped up, posting a career-high in rebounds with nine boards, while also adding six points on the offensive end.

In terms of scoring, the Raiders got contributions from the usual suspects, with Stockill pouring in 11, while senior guard Paige Kriftcher and junior guard Katie Curtis added 15 and 14 points respectively. Head coach Nicci Hays Fort commented on the Midshipmen’s strong performance after the Raiders loss to Navy.

“We did a lot of great things but, unfortunately, we just gave up too many rebounds in that fourth quarter. Navy did some really good things that we just couldn’t counter,” Hays Fort said.

In the last three games, it seems as though the Raiders have kept pace for nearly three and a half quarters offensively, but have just run out of juice on the offensive end when points matter most. It will be interesting to see what sort of adjustments Hays Fort will make to ensure the Raiders can get a little more production to close out these games.

The Raiders play another tough opponent this Saturday, February 13, when they travel to Lewisburg, Pennsylvania to take on the Patriot league-leading Bucknell Bison. In their previous matchup, the Bison bested the Raiders on Cotterell Court, 71-51. Tipoff is scheduled for 2 p.m. and will be aired live on the Patriot League Network. As the season approaches the final stretch, every single game counts; the Raiders will hopefully be able to turn their season around starting with a hopeful win against the Bison.