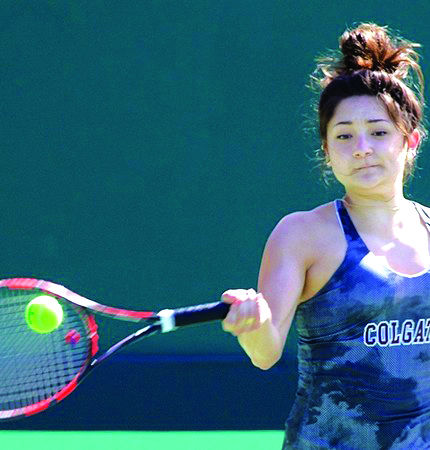 Senior Jennifer Ho led the Raiders in both games on the weekend; her performance was highlighted by a doubles victory in the Sacred Heart match.

The women’s tennis team has kicked off their season in stellar fashion, establishing a winning record of 2-1. This past weekend, the Raiders traveled to Hartford, CT to face-off against Hartford. Like the men’s team, the women’s team also swept Hartford 7-0. After this great victory, the Raiders made the short trek over to Fairfield, CT to oppose Sacred Heart. Again, the women suffered a similar fate as their male counterparts: losing the match in a very close 3-4 result.

Against the Hartford Hawks, the Raiders were dominant from the onset, winning all double matches and then winning all six single matches. When asked about his team’s overwhelming success against Hartford, Head coach Bobby Pennington had some powerful insight.

“This is the second straight win for our ladies against an opponent that beat them last season. It was a focused, pure team effort that showcased our doubles, depth and discipline. The team has gotten so much stronger, both physically and mentally, compared to last season and the first-years are tremendous additions. We can’t wait for Sacred Heart on Sunday,” Pennington said.

Coming off a huge sweep against Hartford, the Raiders went into their match against Sacred Heart with their heads high with a sense of pride.  Although senior Jennifer Ho and first-year Lauren Hyland led the Raiders to an impressive victory in No. 1 doubles,  Sacred Heart was able to secure victories in the other two remaining double matches to give them a 1-0 lead. The only singles victory that the Raiders would attain was from Ho.

“Against Sacred Heart, most of us stepped up our game in the second set; unfortunately it wasn’t enough to clinch the match for us,” junior Kaelin Brittin said.

Luckily, the season is still young for the Raiders and they have a lot of time to flesh out and work on their weaknesses. Based off the Sacred Heart match, one potential weakness could be the fact that they are not that strong of a singles team. In addition, something that the Raiders could work on as the season progresses–and something that they potentially learned from the Sacred Heart game–is that they need to do a much better job of landing their first serve. Brittin echoed this concern after the Sacred Heart game in response to what the team can continue to work on as they get deeper in the season.

“We’re going to work on our footwork and first serve percentages. Both of those things hindered us in our game against Sacred Heart,” Brittin said.

The Raiders host Rochester this coming weekend at Sanford Field House at 2 p.m. Given their victorious history with Rochester, the Raiders should increase to 3-1 after this weekend.

“We crushed Rochester 7-0 last year, so hopefully we can roll them again this weekend,” Brittin said.