The Torchlight Debate: Why Tradition Should Prevail 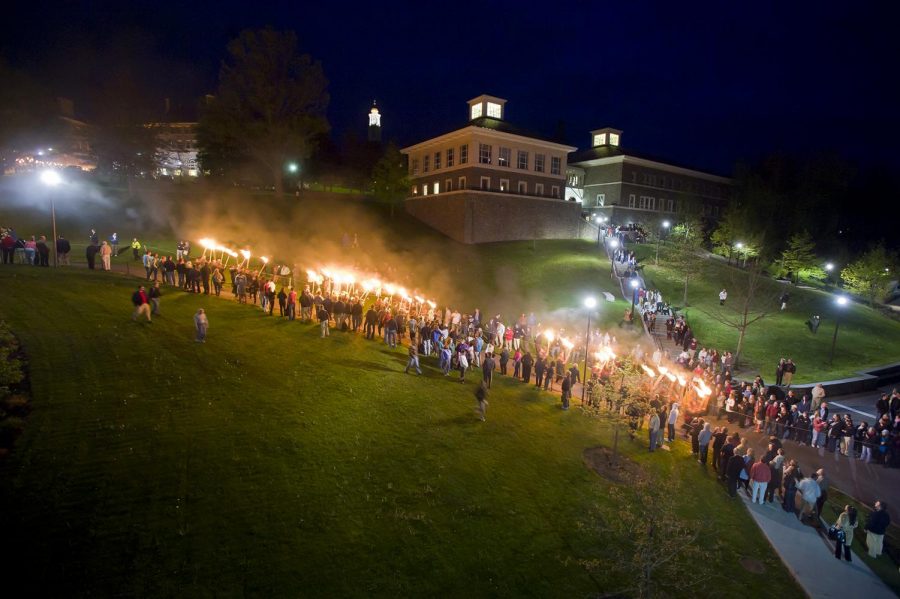 The senior graduating class of 2010 walks down the hill carrying torches in the traditional Torchlight Ceremony the night before Commencement. The seniors walk down the hill and circle Taylor Lake, whereupon they sing the Alma Mater. The ceremony began in 1930 by Frank M. Williams, class of 1895 and president of the Alumni Corporation, and Bernard P. Taylor, class of 1924 and secretary of the college.

Last fall, senior Samantha Hom led a movement to replace key elements of the senior class Torchlight ceremony. This spring, along similar lines, she has lobbied for the elimination of academic robes from that same ceremony. Hom views these traditions as closely analogous to the cultural practices of the Ku Klux Klan, the white supremacist organization that terrorized American black communities during the nineteenth and twentieth centuries and still exists in small numbers today. Were this really the case, there would be cause for the advocacy of swift change. However, the comparisons that this movement has drawn have been based upon faulty logic and fallacious premises.

Traditions are inherently a little bit silly. But so too are the ideas that their history should be rejected and that they cannot be what we choose to make of them. Robes have been standard academic dress for the better part of the past millennium. Scholars in 14th-century English universities were the first required to wear them, and that sartorial tradition endured across higher education as it developed and expanded. The robes we wear at Torchlight and Commencement are the same robes that Isaac Newton, William Gladstone, J.R.R. Tolkien and Harry Potter wore. As Hom rightly points out, higher education has a reprehensible history of excluding women and minorities. But her critique of Torchlight ignores the degree to which colleges and universities have focused their recent efforts on correcting those past wrongs and including individuals of all identities. And it rejects the premise that traditions may take on new, positive meaning as history progresses. The robes she aims to eliminate are also the same robes Henry Livinston Stimpson wore in 1853 when he became Colgate’s first black graduate, and the same robes worn by increasingly diverse graduating classes across the United States to this day. Although there remains much improvement to be made, higher education has expanded dramatically as an instrument of equal opportunity over the past few decades. How ironic that a crusade against “white tradition” relies so heavily on the whitewashing of history.

The long and notably neutral history of academic regalia made robes a natural choice for Torchlight, which occurs the evening before commencement. This newly contentious ceremony was established over 80 years ago as a way of bringing soon-to-be-graduates together to connect with one another and with their institution. Does this mean that we should have to wear robes in May? Perhaps not. But I don’t think that they truly symbolize anything more than those connections, despite whatever fantasies students opposing the traditional attire of graduation gowns have conjured up. The students who have argued for the elimination of academic regalia assert that the wearing of black robes is guaranteed to cause widespread and profound emotional distress. This is an outrageous overextension of the well-intentioned “trigger” debate. For more on that topic, I urge you to read Greg Lukianoff and Jonathan Haidt’s “The Coddling of the American Mind.” And while there is certainly nothing wrong with the idea of class sweaters, why not either stick with the robes or let people wear what they want? Hom asserts that her suggestion would “create a more fun and unifying tradition for everyone,” but her manufactured controversy has had the opposite effect of dividing my class year and making Commencement itself something that can no longer bring us together.

Let’s revisit the original complaint that torch processions are the cultural property of white supremacist groups, namely the Ku Klux Klan. As with the robes, this represents an uninformed position rooted in a deliberately truncated version of history. Is this movement arguing that fire itself should be off limits? Once again, the facts don’t offer much support. Torches are lifted above New York Harbor by the Statue of Liberty, carried in relay to light the Olympic flame and borne in procession in Eucharistic liturgy. In Ancient Greek and Roman times, a torch would be lit in a newlywed bride’s hearth on her wedding night as an expression of love. Should we nullify this overwhelming body of history simply because a hateful few have attempted its parody? I don’t think so.

Most troublingly, the proposal’s more vitriolic proselytizers are not content to make measured arguments as Hom has. The Class of 2016 Facebook group erupted over the Torchlight debate when I responded to a post Hom made on January 28, and most proponents of modified attire at Torchlight turned to emotion instead of making reasoned arguments. Several even resorted to violent, ad hominem attacks on my character and identity, tactics that have no place in rational discussion. Yet no figure within the movement made attempts to point this out, instead content to perpetuate an increasingly acidic echo chamber. Despite our differences, I hold a high degree of respect for Hom’s articulation, drive and commitment to her cause. But I find it inexcusable that others who share her opinion have such tolerance for extreme hatred. We should all be capable of disagreement without disrespect.