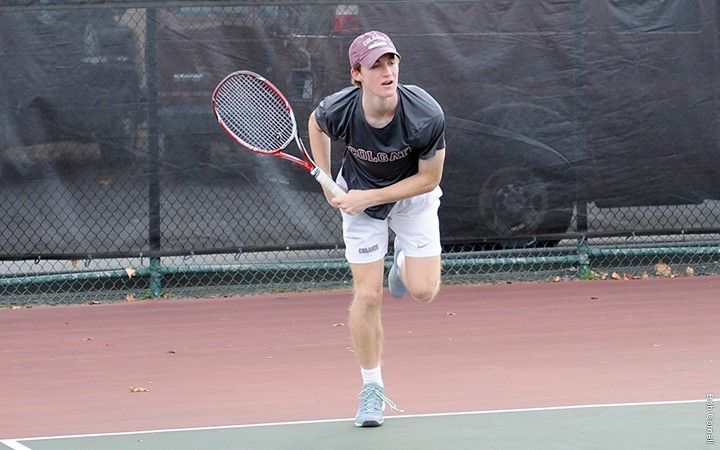 Sophomore Jacob Daugherty won every match he played this weekend, helping the Raiders go 2-1 in front of a rowdy crowd at home.

Colgate men’s tennis bounced back from a tough loss last week against Sacred Heart by dismantling Rochester University in the Raiders’ home-opener this spring at Sanford Field House. The Raiders came away from Saturday’s match with a 6-1 win, but more importantly with regained confidence going into their match against Fordham and Villanova the following afternoon. Colgate defeated Fordham 4-1 in the condensed format, but fell to Villanova 3-2, after failing to clinch the doubles point.

In an interesting shakeup of the lineup, Fujimaki played first singles for the Yellowjackets, taking on Laub in what was probably the best match of the day. Ultimately, Laub was able to take a 7-6, 6-2 victory, however this match was more contested than the scoreline suggests. In the first set, the Fujikami and Laub held serve nearly the whole way, with Fujikami maintaining a lead until the tiebreaker. In front of a rowdy home court, Laub served his way through the tiebreaker, getting easy points off of some big serves, and also pressuring Fujikami’s backhand by sending heavy forehands repeatedly deep down the ad-side. One note to make about today’s match should be the impact the surface made on the outcome. On the turf in Sanford Field House, much of the pace is reduced compared to a hard court. For players like Laub who rely on a flat first serve and an aggressive style of baseline hitting, the reduced pace helps opponents by giving them more time to react and chase down shots. It was noticeable, however, in the second set how Fujikami seemed to wear down, and Laub was able to cruise to the 6-2 win.

At second singles, Daugherty dismantled Baranowski 6-3, 6-4. First-year Noah Rosenblat lost the only match of the day for the Raiders, falling to Shapiro 1-6, 7-6, 6-4 at third singles. Alter cruised through fourth singles opponent junior Sam Leeman 6-1, 6-2. Hirschberg had a closer match against Mevorach at fifth singles, but ultimately won 6-4, 6-3. Junior Win Reynolds defeated Nunno 6-3, 6-3 to cap the Raiders fourth win of the season.

With very little rest, the Raiders kicked off their match against Villanova just hours later. Koman and Haile fell to Luis Miranda and William Elmore 7-5, 7-6. At first singles, Laub lost against Chris Seitz 6-2, 6-2. Daugherty won his match again 6-3, 6-3 against Bradley Noyes. Rosenblat had the most interesting match, losing the first set 1-6, but battling back to win the final two sets and the match 6-2, 6-4. Hirschberg fell to Thomas Dodson 0-6, 1-6.

With two comeback wins on the weekend, Rosenblat showed to a lot of fans what Pennington already knew.

“[He’s] a notoriously slow starter, but obviously comes back well. He settles down and is a really smart player,” Pennington commented.

Colgate is now 5-2 on the season, after suffering two losses that could have easily been wins if a few games had gone the other way. The Raiders travel to Philadelphia this weekend to take on Drexel University and La Salle University on Saturday, February 27, and Sunday, February 28, respectively.