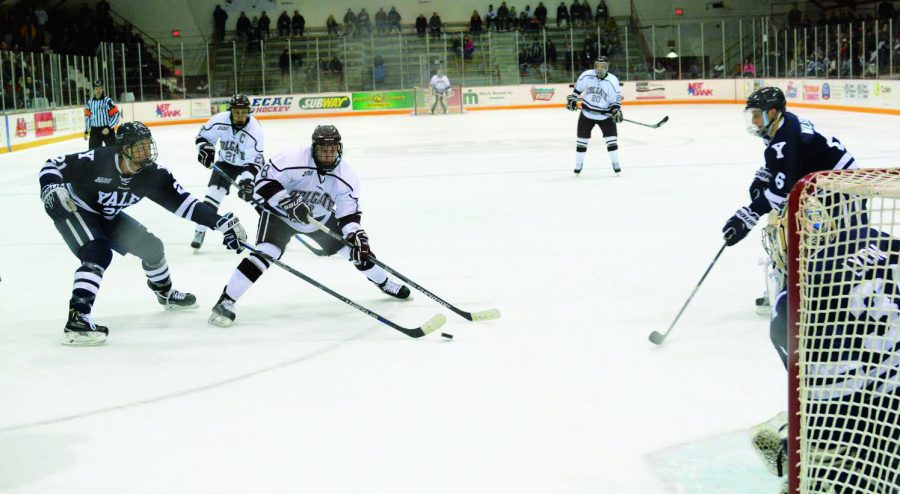 Senior forward Tyson Spink received a pass along the boards and made his way around two Yale defenseman to try and deke Lyon; although he was unsuccessful, he generated an important offensive chance for the Raiders.

The Colgate men’s ice hockey suffered a very tough 3-0 loss to No. 10 Yale this past Friday night. After this loss, the Raiders dropped to an overall record of 8-20-2, with their ECAC standing also dropping to 4-12-2.

Although the Raiders seemed to be dominating the game on both sides of the puck, they were not able to bury one past reigning ECAC Goaltender of the Year, junior Alex Lyon. With a performance of 36 saves, that speaks to not only the capability of this goaltender, but also to Colgate’s offensive prowess and presence in Yale’s zone.

Generating 36 shots in a game is an impressive feat in itself; unfortunately for the Raiders, they were not able to land any lucky shots, despite the multiple opportunities that they had. In fact, the Raiders recorded more shots than the Bulldogs, who only had 28. In the Raiders’ defensive zone, junior goaltender Charlie Finn posted 25 saves, not letting in any goals in the first period, but letting three slip by in the last two thirds of the game.

Something the Raiders have really struggled with this season is their power play and utilizing their man advantage. Against the Bulldogs, for example, the Raiders could have really used a goal in their four power play opportunities; Yale, however, played great defense and Lyon was able to deflect any shots that strayed too close to the net. When asked what went well in the game against Yale, junior defenseman Jake Kulevich had some insight.

“We had a good start and thought we worked really hard. Charlie did a great job in net,” Kulevich said.

The Raiders are known for their ability to work hard both on and off the puck. That was blatantly apparent in the game Friday night. Not only did Colgate seem to be the faster team, they were dominant physically as well, not shying away from any contact in their offensive zone. From a spectator’s point of view, it appeared the Raiders were by far the more dominant team, but simply unable to capitalize on their opportunities – whether that be through their power play or through their cycling down low in their offensive zone. Kulevich also had some insight to share when asked what the team lacked in the game against Yale.

“We made some mistakes in our own zone that gave them extra possession time; sometimes those mistakes resulted in some goals. We just need to bare down in those situations and do whatever it takes to take care of the puck,” Kulevich said.

Defensively, the Raiders seemed to be very solid, with strong performances from both Kulevich and fellow junior defensiveman Brett Corkey, and of course from Finn in net. Yale was just lucky on the offensive opportunities that they did have, and if anything, the Raiders could have done a better job in their neutral zone recovery.

Colgate will be back on the ice this coming weekend for two away games against Dartmouth and Harvard, Friday and Saturday respectively. Coming off a tough game against the Bulldogs, it will be interesting to see how the Raiders handle the last two away games of their season before ECAC playoffs. Kulevich again expressed his optimism on the team’s chances this weekend and stressed the importance of their practice this week in preparing for the upcoming games.

“This is a road trip that a lot of the guys look forward to. We’re playing two really good teams so we can’t afford to make some of the mistakes we made this past weekend. The team has had a good week of practice so far so we’re looking to carry that into the weekend,” Kulevich said.

These games can be streamed online through the Colgate website. The following weekend, the Raiders will return home to host RPI and Union for the Silver Puck Weekend.