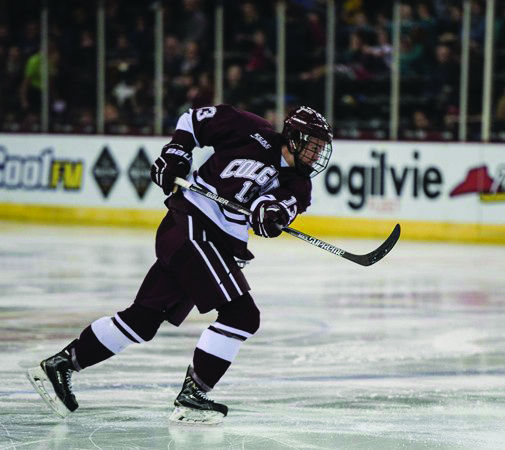 The men’s hockey team went 0-2 this past weekend, with road losses to St. Lawrence on Friday and Clarkson on Saturday.

St. Lawrence sophomore goalie Kyle Hayton, made an impressive 45 saves to lead  the Saints  to a 4-2 victory over Colgate in the ECAC matchup.

The Saints jumped out to a 2-0 lead early in the contest. Joe Sullivan opened the scoring, re-directing a point shot from Ben Masella to take an early advantage. St. Lawrence junior forward Drew Smolcynski added to the St. Lawrence cushion, capitalizing on a Colgate turnover deep in the Raiders zone to beat junior netminder Charlie Finn with a inside the left post.

“We had a slow start. They came at us really hard in the first after the initial power play where we had some good looks. You have to give them credit. They were feeding off the emotion in the building,” Colgate coach Don Vaughan said.

Colgate battled back to tie the game at 2 before the midway point of the second period. Sophomore forward Mike Panowyk put the Raiders on the board early in the second period, deflecting a pass from junior defenseman Brett Corkey past Hayton.

First-year Rory McGuire tied the game with a slap shot from the left point that beat Hayton midway through the second. It was McGuire’s first collegiate goal. Smolcynski restored St. Lawrence’s advantage with 90 seconds remaining in the second period, tallying the eventual game-winner on the power play for his second goal of the contest.

“We responded well. I thought we worked hard enough to get something out of this tonight, but that’s the way it’s going for us right now,” Coach Vaughan said.

The Raiders have experienced one of the quickest falls from grace within the ECAC, as they have dropped from an ECAC title game appearance last season to 11th in the conference this season, ahead of only Brown.

The Raiders boast the league’s second worst goal margin this season, and have struggled defensively. On average, the Raiders surrender 3.27 goals per game and only score 2.48 a match. Last season, the Raiders outscored opponents 2.68 to 2.00. Colgate’s drop-off this season was unanticipated, but their weakness comes with a lack of numbers. The Raiders have only 23 roster players, which is the minimum. Their losses of top-end players and early departures have been a larger setback than people expected.

Colgate’s season struggles continued with a 2-1 loss to Clarkson on Saturday. Clarkson senior forward Christian Powers opened the scoring just 3:02 into the contest as he stuffed home a loose puck from the top of the crease to give Clarkson the early lead. Senior forward Tyson Spink answered for the Raiders, beating Clarkson keeper Greg Lewis on the break to notch his 11th tally of the season. Clarkson sophomore defenseman Terrance Amorosa restored the Golden Knights’ one-goal advantage with 16 seconds remaining in the first when his point shot found the back of the net for his third goal of the season

“We battled hard. It’s disappointing. We’ve got to find a way to put pucks in the net,” Vaughan said.

The Raiders lost the possession battle with Clarkson, and were outshot 31-22 by the Golden Knights. Clarkson held the edge in the first (12-6) and second (11-7) periods while Colgate posted a 9-8 margin in the third. It looked as if Colgate may have had the right elixir to fix their woes this season against a slumping St. Lawrence and Clarkson. St. Lawrence has dropped out of the top 20, going 1-5 over their last six games entering the match against Colgate. Clarkson is among the bottom of the conference, with an ECAC record of 4-6-3 prior to their victory on Saturday.

Up next, the Raiders look to turn the tide against the Princeton Tigers on February 5 for a 7:00 p.m. contest at the historic Hobey Baker Rink. The game will be available to live stream off of the Colgate Athletics website. With these past two losses, and with the season approaching the final stretch, the Raiders will need to bring the high level of play we all know they are capable of to beat Princeton.