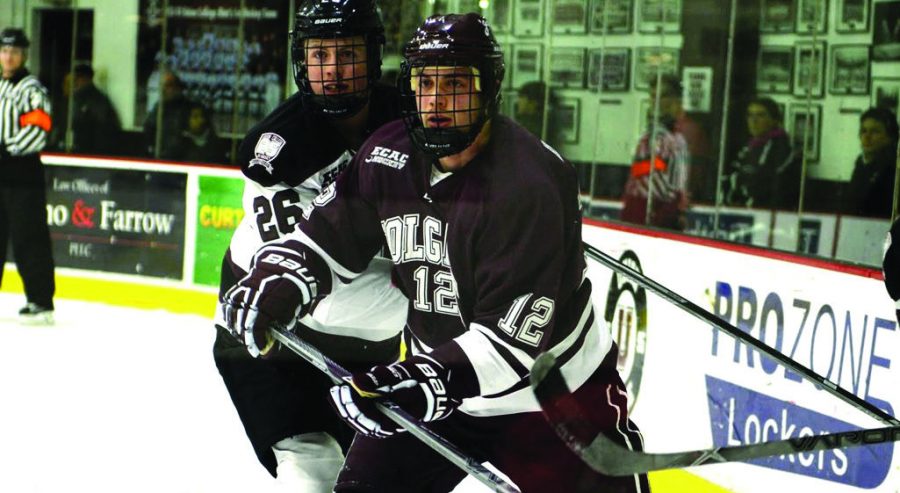 First-year forward Adam Dauda tallied a goal for the Raiders as they battled it out against the Harvard Crimson this past weekend. The Raiders ended up falling to Harvard 7-4 in what proved to be a very intense contest.

The Raiders went 0-2 on the weekend, with road losses to Dartmouth on Friday and No. 13 Harvard on Saturday.

Dartmouth sophomore Corey Kalk scored two goals and added two assists to help lead the Big Green to the win and a sweep of the season series. Junior Grant Opperman scored early for Dartmouth, firing home a loose puck from just above the goal line on the left side to give the team a 1-0 advantage.

Kalk added to the Dartmouth cushion with his first goal of the evening, firing a wrist shot from the middle of the slot past junior Colgate netminder Charlie Finn to make it 2-0.

Opposing senior Jack Barre closed out the opening-period onslaught, finishing a backhander inside the left post to make a 3-0 contest.

Kalk expanded the Big Green lead to 4-0 with his second goal, sending a slap shot from the right faceoff circle past sophomore goalie Bruce Racine who replaced Finn. Sophomore forward Evan Peterson answered for Colgate just 58 seconds later, firing a snap shot from the middle of the slot that bounced off Dartmouth keeper James Kruger’s shoulder and into the net to trim the deficit to 4-1.

Senior Tylor Spink pulled the Raiders within two during the final minute of the middle frame when he stuffed home a feed from senior forward Mike Borkowski to make a 4-2 contest.

Dartmouth sophomore Carl Hesler closed out the scoring with an empty net goal with 2.9 remaining in the third period. Finn got the start in goal for Colgate and made 10 saves before being replaced by Racine at the start of the second. Racine recorded eight stops over the final 40 minutes. Kruger recorded 18 saves between the pipes for Dartmouth.

“The game was lost in the first period tonight. You cannot give up three goals, especially on the road. We were just really porous defensively and it was our veteran players, not the freshman in this case. Guys were just following pucks,” Raiders head coach Don Vaughan said.

Colgate has struggled all season on the blue-line, leading to a high goal differential. The Raiders have been outscored 3.45 to 2.53, a margin of .92 goals per game–the worst in the conference. Their losses of top end players and early departures have been a larger setback than people expected.

Their season struggles continued Saturday against Harvard at the Bright-Landry Hockey Center. Harvard senior Kyle Criscuolo scored with less than three minutes to play in the third period to break a 4-4 tie and spark the Crimson to 7-4 victory. Harvard took control early, as senior Jimmy Vesey and junior Luke Esposito scored back to back in the opening frame to give the Crimson an early 2-0 lead.

Colgate battled back, using goals from seniors Spink and Darcy Murphy to tie the game at 2 before the first intermission. Seb Lloyd restored Harvard’s lead in the second period, but first-year forward Adam Dauda brought the Raiders level once again with a breakaway goal to tie the game at 3. The Crimson again regained the lead in the third on a Tyler Moy tally, but Tylor Spink countered, tying the game at 4.

Goaltender Merrick Madsen finished with 26 saves between the pipes for Harvard. Racine finished with a career-high 27 saves after replacing starter Charlie Finn in the first period.

“I can’t believe some of the bad luck we’ve had this season. The game-winning goal, we have a guy in the lane. He blocks the shot and it goes right to the guy in front of the net. It’s just bad luck,” coach Vaughan said.

The Raiders will look to turn their luck around Friday night against No. 17 RPI in a 7 p.m. contest, their second-to-last regular season match at Starr Rink.