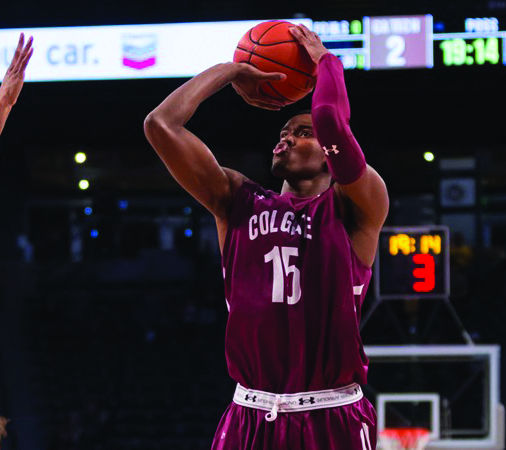 After suffering a heartbreaker to Loyola on Monday, the Colgate men’s basketball team had a big win on Saturday against Navy, 58-55, which snapped their three-game losing streak. The next matchup against Army brought a hard loss for the Raiders, 82-79.

Colgate comes back to Hamilton 1-1 after a  hard-fought week of basketball, having played both games on the road. Against Loyola, Colgate endured a three-point loss but was able to bounce back strong and take down Navy. The contest ended in another three point margin, this time in Colgate’s favor.

“Winning on the road is hard to do. I was proud of the fight our team played with, especially being a little thin in the front court due to injury and foul trouble, against a team that has good size and attacks the basketball well,” head coach Matt Langel said after the tough loss on Monday.

Langel recognized the away game was more challenging, but seemed optimistic for their upcoming matchup against the Navy Midshipmen.

Against Navy, Colgate was led by the impressive offensive play of sophomore forward Jordan Swopshire. He scored the first seven points in a row for the Raiders. Overall, he ended up pouring in 20 points, shooting 5-7 from downtown and 7-11 overall from the field. Assisting him in the scoring column was senior guard Austin Tillotson, who cashed in 13 points in the contest as well as four assists. In addition to Swopshire and Tillotson, the Raiders received help from sophomore guards Jordan Robertson and Sean O’Brien, who together scored an additional 14 points.

Colgate secured the win via their strong team defense, improved ball security and very impressive three-point shooting. The Raiders consistently contested shots, leading to Navy’s abysmal 7.1 three-point shooting percentage. Colgate improved in the turnover column. On the season the Raiders average 13 turnovers per game, but against Navy this statistic waned to below the 10-turnover mark (9). Colgate took more than half their shots from behind the arc – 25 of their 48 total – and was able to make an impressive 11 three-point field goals.

“When you’re on the road it’s a little more difficult to win. Navy is in second place for a reason. They’re a really tough-minded team, who is very disciplined and well coached. They changed the rhythm of the game by changing defenses and not letting you get the ball up the court easily. We were prepared for it,” Langel said.

Although they shoot great from the three-point line, Colgate could benefit from improved shooting from the free-throw line, where they shot just above the 50 percent margin for the game. Still searching for the .500 mark, Colgate finds itself fourth in the League at 11-12 overall, after defeating the Navy

The Raiders went into their third away in a row game against Army. Like many of the games the Raiders have had during regular season play, the score kept going back and forth, with the Black Knights taking the lead after the first half. The Raiders ultimately fell to Army 82-72. Tillotson had a very notable performance, once again leading the offensive scoring for the Raiders, tallying 16 points.

The Raiders hover right in the middle of the Patriot League standings, making their final games in regular season play very important. There is still time to turn around what has become a bumpy season.

Next up for Colgate is a home tilt against Bucknell, scheduled for Saturday, February 13. Bucknell is currently ranked first in the Patriot League, so the Raiders will have their work cut out for them this coming weekend. If Colgate can somehow execute their defensive strategy and capitalize on their offensive opportunities, they could come into the final stretch of the season having beaten the top team in the Patriot League.  As history can attest, momentum

going into the final games of the regular season will make all of the difference for the Raiders as they pursue postseason play. With leadership and consistent scoring capability from players like Tillotson, the Raiders have a good chance of besting the Bison in what will undoubtedly be a rowdy tilt. The game against Bucknell is scheduled to start at 2 p.m. and will feature an interesting halftime show sponsoring a sports charity that helps underprivileged kids in marginalized countries.