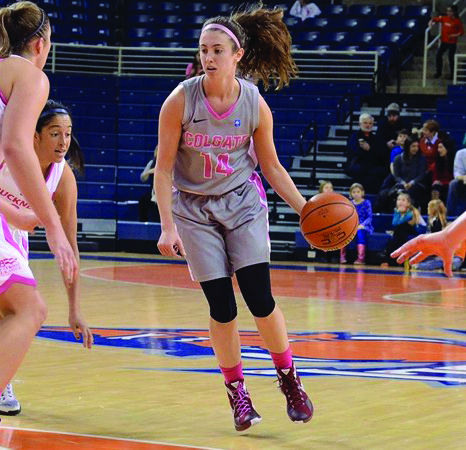 Senior captain Paige Kriftcher scored a very impressive careerhigh 29 points against the Bison, but was unable so secure a Colgate victory.

The women’s basketball team suffered a tough loss against Bucknell this past weekend, losing to the Bison 79-60. The Raiders are now 4-19 overall and 2-11 in the Patriot League; Bucknell, however, remained at the top of the Patriot League tied with Army for first place.

After the first quarter, the Bison led the Raiders 22-13 and kept more than a ten-point lead for the majority of the game. There were times during the match the Raiders were scoreless for minutes on end and that really hurt them, giving the well-shot Bucknell team a huge advantage: the Bison shot 55.1 percent from the field, compared to Colgate’s 34.4 percent. Senior captain and guard Paige Kriftcher tallied a very impressive 29 points in Saturday’s game. Junior guard Katie Curtis also had an impressive game for the Raiders, recording a solid 10 points against the Bison. Although there were individual players who did very well, as a whole, the Raiders were unable to keep up with the rapid and relentless scoring capability of the Bison.

“I think our team really responded well in the third quarter. We dug ourselves a hole in the first half, and came out of the half with a lot of fight to chip away at their lead,” Curtis said.

As Curtis mentioned, the Raiders had a hole to dig themselves out of coming out of the first half, which has been a common theme this season. While the Raiders are a very solid team with great talent, as displayed by Kriftcher’s performance, they often fall behind early on in the first half and the rest of the game becomes a race against time as they attempt to close the gap. Equally as important to the Raiders’ loss – and again, something that has hindered them a lot this season – is the fact they went several minutes and drives up the court without scoring a bucket. Playing a top contender like Bucknell and not capitalizing on offensive opportunities was almost a sure way to lose the game Saturday. After the game, Curtis echoed the sentiment.

“We had quite a few empty possessions, which really hurt us. Bucknell is a very efficient team, and we needed to capitalize on our opportunities,” Curtis said.

As the season’s end approaches, the Raiders need to reflect back on their season so far and understand and comprehend their shortcomings and work on mitigating them in the final stretch. With five total games before the Patriot League tournament start, it is absolutely vital for the Raiders to play their best basketball, as these games could determine their fate in postseason play. Their next game is home against Boston University Wednesday at 7 p.m. The Raiders have already beaten Boston University once this season, and if they bring a high level of intensity and play to their strengths early on in the game, they should have no problem beating them again.

“Going in to the Boston University game, our mentality is similar to the last time we played them. We had success against BU by sharing the ball, shutting them down on defense, and playing our hardest for the full 40 minutes. That’s what we plan on doing this time around as well,” said Curtis.

After a hopeful win against Boston University, the Raiders will travel down to Baltimore, Maryland this coming Sunday to play Loyola at 2 p.m. The Raiders lost to the Greyhounds by 16 points earlier in the season so it will be very interesting to see if they can turn it around in this upcoming tilt. When asked about the importance of the past couple of the games, Curtis offered some powerful insight on what the team’s goals are for the remainder of

“These last couple of games are extremely important to our season, but do not necessarily determine how this season ends due to the nature of the PL tournament. However, we intend on using each of these last five games to build our confidence going into the tournament, and give us momentum for a great run,” Curtis said.

As the Raiders head into the final stretch of their season, only time will tell if they have what it takes to go far in the Patriot League tournament and turn their season around.