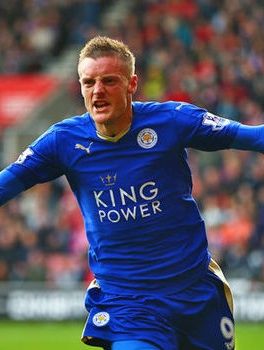 English striker Jamie Vardy and the rest of Leicester City have taken the Barclays Premier League by storm - can they hold on and win the title?

As the Barclays Premier League season kicks into its final turn, supporters of BPL teams are beginning to get a sense of their teams’ title hopes. 20 teams kicked off the season in August hoping to reach immortality come season’s end, but at this point in the season only a handful have a chance to realize their dreams from the beginning of the season.

While the dream was alive and well for teams such as Aston Villa, Sunderland, Newcastle, Norwich, Swansea and Bournemouth, 26 games have passed and none of the above teams have shown championship-quality play on the pitch. Particularly with Aston Villa, the team has posted just 16 points thus far and seems bound for relegation. The battle for the remaining two relegated teams will likely come down to the final mathes, however, as five teams are all within five points at the bottom of the table.

Moving up toward the middle of the table, Chelsea have yet to shake its early season struggles and currently sits twelfth. The reigning champs have fallen significantly, and while supporters of the London club hope the coaching change that saw the departure of Jose Mourinho and the arrival of Guus Hiddink will turn things around, injuries to their defenders plague the starting XI going forward. Starters John Terry and Kurt Zouma were absent for the team’s recent 2-1 defeat at Parc des Princes against PSG in the UEFA Champions League, and their recent play indicates it will be difficult for the club to climb higher by the end of the 2015-2016 campaign. A little farther up the table, recently promoted Watford have been a surprise, as they sit ninth in the table and have competed with the perennial BPL powerhouses. Propelling the squad has been Nigerian forward Odion Ighalo. The striker has recorded 14 goals, putting him fourth in the League.

Competing at the top of the table, however, has been the biggest surprise of the BPL season and the story that has captivated fans worldwide. Leicester City, the club that was in danger of relegation midway through the 2014-2015 campaign, has risen to the top of the league and has stayed there, despite many believing they would fall back to reality. Led by striker Jamie Vardy’s 19 goals and midfielder Riyad Mahrez’s 14, the club has recorded 53 points and, despite a recent loss at Arsenal, control its own destiny as the season winds down.

Skeptics still believe the fall from grace for Leicester City has yet to come, and if this were to happen many teams who have had strong seasons up to this point are waiting in the wings. Tottenham sits second in the table with 51 points, just two behind league-leading Leicester City. English striker Harry Kane has continued his heroics in his home country, leading the Spurs with 16 goals and more recently coverting a crucial penalty in his squad’s 2-1 victory over Manchester City.

Outside Leicester City and Tottenham, the other teams that are seeking a BPL title near the top of the table include more traditional powers. Sitting third is Arsenal, equal in points with their North London neighbors at 51. Arsenal has seen incredible teamwork from two of its international stars. French striker Olivier Giroud has tallied 12 goals on the campaign, many of which have been set up by German midfielder Mesut Ozil, who has a staggering 17 assists. Arsenal recently defeated top of the table Leicester City, and hopes to keep this momentum going as it prepares to travel to Manchester United for its next match.

Speaking of the Red Devils, United sits fifth in the table, impressive considering the controversy that has surrounded skipper Louis Van Gaal this entire season. Injuries have left the United defense with many holes, as Luke Shaw has been absent for a majority of the campaign and a recent injury to Matteo Darmian will again hurt the starting XI. The big summer splash United made in signing Memphis Depay from PSV Eindhoven has not turned out to be as great as many fans hoped, as his role has been reduced to an occasional substitution. Promise does come for Manchester fans, however, as Anthony Martial’s arrival from AS Monaco has inspired the Red Devils offense.

Lastly, sitting fourth with 47 points is Manchester City. Two straight losses to Leicester City and Tottenham have the Citizens reeling, looking for answers. Coupled with the announcement of Manuel Pellegrini’s departure, City is hoping to bounce back and finish this campaign with at least a Champions League berth. A relatively easy schedule remains for City, as many of its toughest matches will be played at home.