Physicist David Andrews Discusses the Life of a Photon 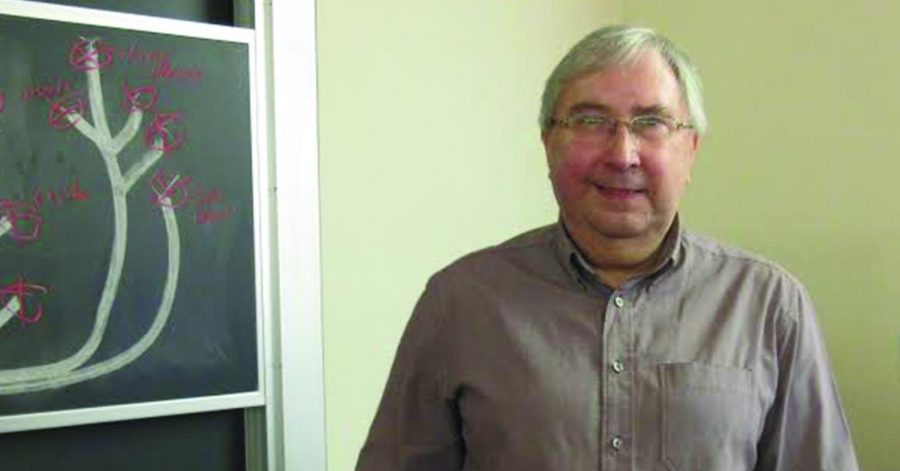 Professor David Andrews of the University of East Anglia (UAE) in the United Kingdom visited Colgate University on Friday, February 12 to explain one of the most alluring and perplexing concepts in physics: the photon.

As the head of UAE’s nanophotonics and quantum electrodynamics research group, Andrews has spent the last few decades contributing to optics research. However, modern research indicates there is still much more unkown information in this field than researchers previously thought.

“The photon is understood less well now than it was even 20 years ago,” Andrews said.

Andrews qualified his presentation on “The Light of a Photon from Start to Finish” by telling his audience that a photon does not exist for any amount of time. Similar to the enigma that light behaves as both a particle and a wave, a photon is emitted and absorbed simultaneously.

“The further the photon travels, the more real it becomes … [it] gradually emerges into the form where it is detected,” Andrews said.

Theoretical concepts like these were explained throughout the rest of the presentation, as Andrews outlined different aspects of light theory through various equations and examples.

Junior physics concentrator Ishir Dutta researched optics last summer at Colgate in his study of chiral molecules, so Andrews’ presentation initially seemed to be on a topic he already thoroughly understood. However, Andrews presented many ideas which caused Dutta to re-evaluate much of what he had already learned.

“We read a lot of [the papers cited in the presentation], and they make way less sense now,” Dutta said.

Along with Dutta’s project, much of Colgate’s research in the physics department overlaps with topics covered both in the presentation and in Andrews’ current work.

Furthermore, the presentation detailed optical vortices, or light that travels in a corkscrew path. Andrews said there are about a dozen ways to manipulate light this way – one of which was created by Colgate’s Charles A. Dana Professor of Physics and Astronomy Kiko Galvez.

Although the study of optical vortices is mostly theoretical, Andrews said that the practical applications can have numerous benefits, as twisted light explores concepts from “photobiology to quantum communication.”

One of the current research applications is separating chiral molecules, as previously mentioned. Chirality occurs when a molecule has two different forms that are nearly identical. Yet with pharmaceuticals, for example, one version of the molecule can be beneficial for one’s body, while the other version can be destructive. Pharmaceutical companies must make sure that the beneficial version gets in consumers’ hands. Andrews and Dutta have been researching ways to streamline the process of separating these molecules using twisted light, as current techniques are expensive and time-consuming.

Andrews also mentioned that some researchers are working on using optical vortices to encode more data in optical fibers. Twisted light can carry more data at a much faster rate, which would significantly aid data centers such as Google.