Contemporary Rendition of The Canterbury Tales Performed by Baba Brinkman 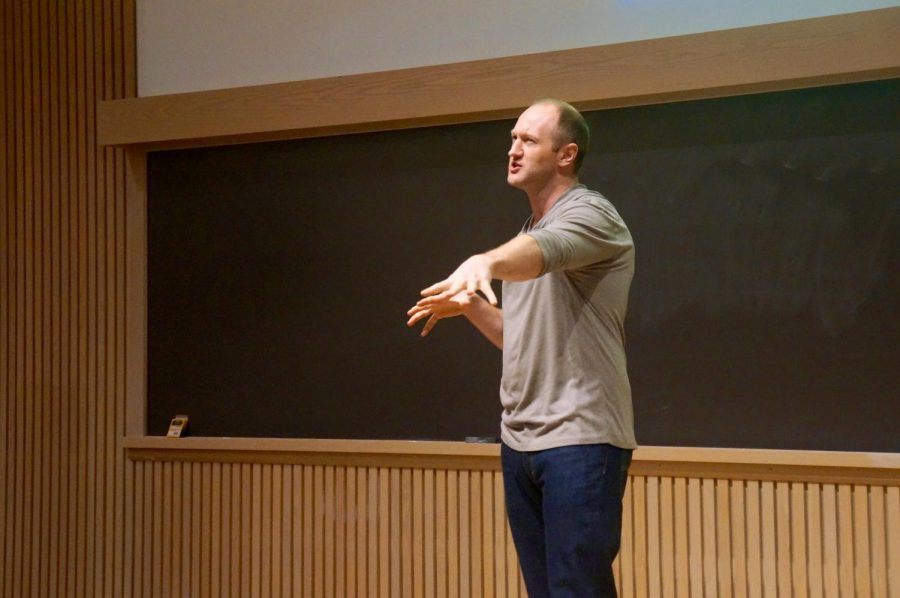 Hip hop artist and literary enthusiast Baba Brinkman traveled from his home in Canada to Colgate on Tuesday, February 9 to perform his show, “The Canterbury Tales Remixed.” As a graduate from the University of Victoria with a Master of Arts degree in Comparative Literature, Brinkman has spent much of his career transforming Middle English texts into contemporary language,

specifically through his passion for rap.

Brinkman’s performance showcased his adaptation of The Canterbury Tales by Geoffrey Chaucer and began to explore the anonymously written Beowulf. Brinkman, balancing his raps with an explanation of the story and themes, created an inviting environment for individuals well informed about the texts, as well as those meeting these narratives for the first time. Brinkman tries to bring the spirit of the text alive to please what he calls “purists” – those who care about the text in its original form – and the “tourists”– those who are more invested in the narrative for entertainment purposes.

“What I’m trying to do is chart a middle ground,” Brinkman said.

Enthralled with the power and freedom of rap, Brinkman spent much of his performance comparing the art forms of literature and hip hop.  To Brinkman, both Chaucer and rap express the same thing; they both use colloquial language and allusions to observe the regularities of human nature. Furthermore, he argued that poets follow a tradition of exposing intolerance in human nature. Rap follows this mold as well. Myriad poems and raps satirically bring up subjects that society is uncomfortable with. In doing so, artists deliberately provoke outrage in order to expose the hypocrisy of people who are infuriated by words but not the inequalities and actions described by the words themselves.

Brinkman refuted the stereotypical belief that rap culture was solely focused on misogyny and violence. Although not denying its existence, Brinkman stated that oftentimes, the most outlandish rap becomes highly publicized, in a similar fashion that violent action movies become blockbusters. However, action movies cannot stand in for the film industry as a whole, creating layers between and within genres. He instead finds depth and truth in rappers expressing themselves and critiquing “accepted” societal beliefs.

“I thought that it was a unique rendition of The Canterbury Tales that was both humorous and entertaining without deviating too much from the major themes or plot,” first-year Audrey Swift said.

For his performance, Brinkman explained several narratives from The Canterbury Tales. Among those included were “The Merchant’s Tale,” “The Pardoner’s Tale” and “The Wife of Bath’s Tale.” Although staying true to the story, the raps included modern day references as well as visuals to engage his audience.

“He used pop culture references like Kanye  [West] quotes or modern day terms like “cougar” in The Canterbury Tales performance. That helped it resonate with me, and I’m sure a lot of the younger audience as well,” first-year Julia Klein said.

Brinkman ended his performance with his adaptation of Beowulf.  As the story progressed, he paused. Brinkman told his audience that he was finished retelling the story; he endorsed reading to hear the end. In his concluding marks, Brinkman told the audience that it was not sufficient to listen to a rapper for an education, promoting the importance of reading.