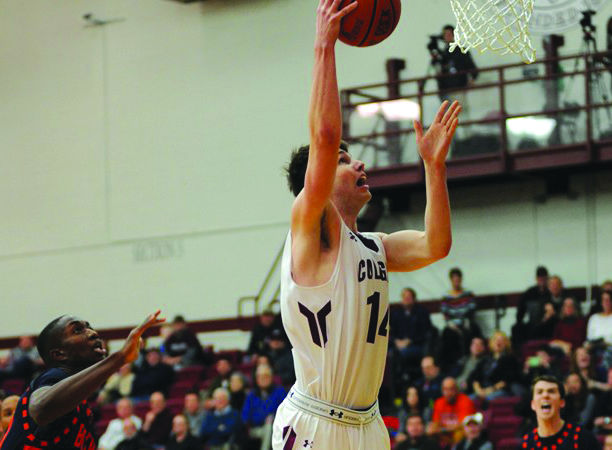 Colgate men’s basketball’s last two games have finished in 10 point differentials. While the first game didn’t go their way, the Raiders were able to flip the switch in the second contest and add a colossal game to their win column. Coming off a tough loss Monday night against Army, 72-82, Colgate was able to bounce back and take down Bucknell, 91-81. The Bison are No. 1 in the Patriot League thus far. Head Coach Matt Langel had some powerful insight about the game after his team’s victory.

“Yeah, they’re a really good team. They’ve got great talent and I credit our guys for their discipline on the defense end. I think they were disappointed when they saw the film at Army; yes, Army played really well and shot it well, but we weren’t necessarily the defensive team that we can be. I think [Bucknell] got loose for some jump shots and shot a pretty good percentage over the course of the game, but we took away a lot of the easy ones in the second half especially and made them do some things that they maybe don’t typically do. So I’m really proud of my guys and happy for the results of course,” Langel said.

One of Langel’s strengths as a coach is helping his team move past losses, by learning during tape sessions and coming back both mentally and physically prepared for the next matchup. This certainly showed against Bucknell. Colgate seemed more energized and prepared for the big league game than ever before. After Bucknell scored the first basket, Colgate scored the next 11 straight points to take an 11-3 lead.

The Raiders went up by as much as 12 before Bucknell began to rally back. With 12 minutes left in the half and Colgate up seven, senior guard Chris Hass went on a scoring tear, hitting five consecutive buckets on each of Bucknell’s successive possessions, pouring in 13 points and giving Bucknell their first lead since the opening possession of the game, 27-24. However, when Hass was subbed out, Colgate fought back to reclaim and hold onto the lead for the remainder of the half.

Senior point guard Tillotson hit a jumper with five seconds left (44-39), in an attempt to close out the half. However, first-year guard Kimbal Mackenzie hit a running heave from just inside half court to make it a two-point game, 44-42, going into the locker room.

The second half started with Bucknell hitting a three-pointer to take the lead, 44-45. The Bison remained on top until 14:33 in the period, when Tillotson scored a lay-up. Colgate built its lead to nine and remained ahead for the rest of the game. Though Bucknell never threw in the towel, Colgate was able to disrupt their offense, forcing contested shots and virtually making Hass, who had scored 15 in the first half, a non-factor. In addition to quality team defense, tough physical play and particular attention to Hass, offensively Colgate was particularly aggressive in backing down their defender.

Showing their aggressive play, in the second half alone Colgate made 10 layups. Sophomore forward Tom Rivard was particularly dominant down low; often starting with his back to the basket, he made 10 of his 12 field goals. Rivard filled up the stat sheet, scoring 24 points, 2-2 free throws, and even 2-3 from three-point land. Other major scoring came from Tillotson (20 points) and sophomore guard Jordan Robertson (17 points). While Robertson did not start the game, he provided a needed source of energy and talent off the bench. Robertson made a perfect 3-3 from 3-point territory, with a couple coming at a pivotal moment in the game that brought the crowd to their feet. Overall, he was incredibly efficient scoring, making 6-7 field goals and 2-2 from the stripe.

With four games left in the regular season, Colgate looks to build off of this win, closing out the season strong and potentially making a run in the postseason. While the Raiders have suffered several close losses so far in their season, they can definitely build off this crucial victory to head into their remaining games with a winning attitude. The Raiders faceoff against Loyola this weekend on their home court; the game is scheduled to start at 12 p.m.