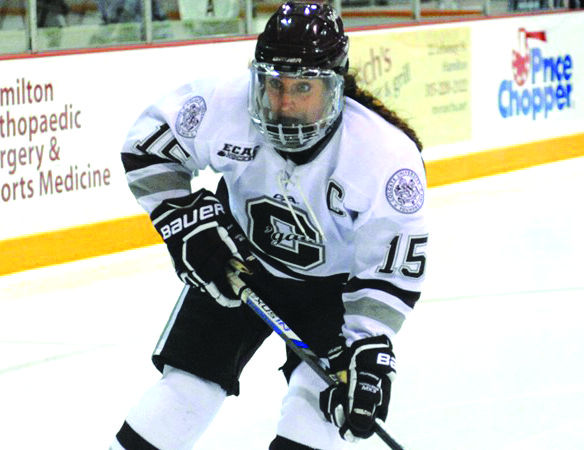 Last weekend, the Colgate women’s hockey team went on the road to take on the Rensselaer Engineers Friday night in Troy, New York, and the Union College Dutchwomen in Schenectady the following afternoon. As the weekend drew to a close, the Raiders had tucked two more victories under their belt, which left their record at 16-5-7 overall and 8-3-5 in ECAC Hockey play. The Raiders remain the nation’s tenth-ranked team, a very impressive feat.

Friday’s game started out at a high-level of intensity when RPI got on the board in the fourth minute. Senior forward Mari Mankey was able to score for the Engineers off of an assist from senior forward Lauren Wash and junior forward Kate Rooney. Not long after, the Raiders also got on the board in the seventh minute, when senior defender Nicole Gass was assisted by first-year forward Jessie Eldridge and first-year defender Chelsea Jacques. As the first period continued, the Raiders were able to pull into the lead, creating a gap between the two teams that would only widen as the contest continued. In the eleventh minute, first-year defender Olivia Zafuto scored following an assist from sophomore forward Annika Zalewkski. At the conclusion of the first period, the score stood at 2-1, with the visiting team in the lead.

Going into the second period, RPI fought to regain lost ground. In the eighth minute of the second period, sophomore forward Shayna Tomlinson was able to close the gap for RPI thanks to an assist from senior defender Jenn Godin and senior forward Alexa Gruschow. In the fourteenth minute, RPI pulled into the lead when junior forward Laura Horwood scored on a power-play following an assist by Tomlinson and Gruschow. This would be RPI’s last goal of the game. Less than a minute later, the Raiders were able to tie it up once again when junior forward Kayla Haus was assisted by sophomore forward Shelby Perry and junior defender Hannah Rastrick. In the third quarter, the Raiders regained the lead in the second minute of the period when Zalewski scored on a power-play, with assists by Zafuto and Perry. In the tenth minute, Colgate solidified its lead when sophomore forward Breanne Wilson-Bennett brought their total on the night to five. At the contest’s conclusion, Colgate had gone 1-for-1 on power-plays, whereas RPI went 1-for-5. Additionally, Colgate outshot the home team 29-24.

Wilson-Bennett scored the game’s lone goal for Colgate on a power-play, with the assist going to Eldridge. The goal was Wilson-Bennett’s twelfth of the season, and her third power-play goal of the year. Although the Dutchwomen fought to catch up to the Raiders, they were unable to do so, and the final score stood at 1-0, with Colgate notching another victory. The win was Colgate’s sixteenth of the season, making this season their most successful since the team’s 2008-09 campaign, when they went 19-14-3.

“It feels good to round out this weekend with two points. You can’t ever take for granted how hard it is to win in this league and tonight was no exception. We had to earn everything we got,” Head Coach Greg Fargo said on the team’s successful weekend.

Next weekend, Colgate will be back on its home turf, taking on Princeton on Friday night and Quinnipiac the following afternoon.