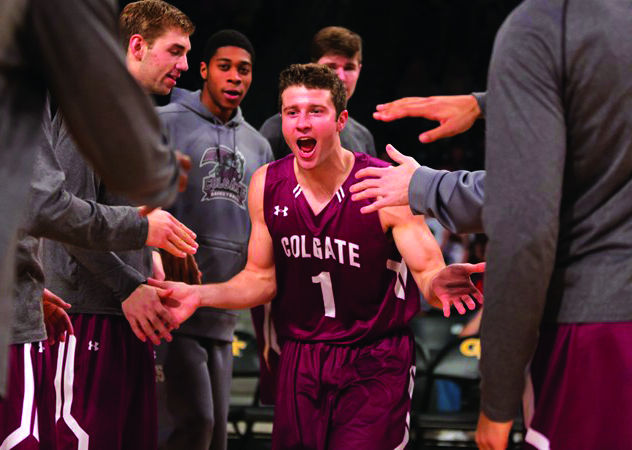 After suffering a heartbreaker against Boston University on Wednesday, 71-68, on Senior Day the Raiders were able to defeat the talented Loyola Greyhounds in overtime when senior guard Austin Tillotson hit a deep three at the buzzer.

The last time they faced Loyola, Colgate lost a close one 68-65. This time the Raiders were determined to get a win. Senior guards Alex Ramon and Tillotson, who were honored before the game for their dedication to Colgate on and off the court, led the Raiders, along with two other sophomore starters: guard Sean O’Brien and forward Tom Rivard. Rivard, who had a career-high 24 points last week against Bucknell, scored 17. O’Brien scored a career-high 18 points in the contest, going a perfect 8-8 from the field during regular time. Ramon provided a much-needed source of energy and production off of the bench. After going 1-1 in the first half, Ramon was spectacular thereafter, leading the way with 12 points in the second half and adding another four during the overtime period. Lastly Tillotson, who leads the Raiders with 15 points per game, consistently scored in each period for a total of 20 in the contest.

Loyola led the game for the entirety of the first half, going up by as much as nine. Senior big man Franz Rassman was dominant in the paint and led the way for the Greyhounds, scoring 15 points on 7-10 from the field. Senior guard Eric Laster and sophomore guard Andre Walker provided help, scoring six points each. However, Colgate was able to remain in the game by playing solid team defense and shooting a high percentage in the low scoring half. With seconds left on the clock, sophomore guard Jordan Swapshire swished a trey to bring the game to within three before heading into the locker-room, 34-31.

The second half was more electric and high scoring than the first period. Loyola seemed to stray from their previous focus on scoring down-low. Rassman was a complete non-factor, scoring three points. Instead, Laster completely caught fire and was virtually ungaurdable. He scored 20 points in the period and didn’t miss a three.

Despite Laster’s impressive performance, Colgate continued to compete. Ramon led the way for the Raiders, scoring 12 points. Four minutes in, Tillotson hit a layup and Rivard a free throw, giving Colgate its first lead in the game, 41-40. With 6:50 left in the period, Loyola took back the lead and the two teams then traded it back and forth. With two minutes left, Laster hit a three to give Loyola its final lead, 79-77. After Walker missed a mid-range shot, O’Brien scored a driving bucket in the paint to tie up the score and force an overtime period.

At the start of overtime, first-year center Dana Batt scored two free throws to give Colgate the lead. After a pair of layups from Ramon and one from Rivard sandwiched in between, the Raiders found themselves up by five, 87-82, with 1:19 left. Laster, who had previously been Loyola’s entire offense, disappeared going 0-1. However, Walker, who had been steadily producing throughout the game, seemed to replace Laster as Loyola’s “can’t miss guy.” Each time Colgate scored, it seemed that Walker personally retaliated by scoring a basket of his own. After Walker scored a bucket by driving to the rack, Loyola found itself down by two, 89-87, and fouled Tillotson immediately. After Tillotson missed his first free throw, he swished the second, increasing the lead to three. With ten seconds left, Walker dribbled up the court and banged in a three to tie the game at 90-90. However, with four seconds on the clock, Tillotson received the inbounds pass and flew up the court, draining a running three at half court to win the game at the buzzer.

When asked about his reaction to the final play, Tillotson had some interesting insight.

“Honestly, I was shocked they allowed me to catch it so clean after Walker made the three to tie it up. I caught the ball off the inbound pass with a full head of steam toward half court and luckily had enough room where I could get a shot off.  When I released it, the ball felt like it was in the air forever, but it luckily went through. It was just a special day for me, the team and especially my family. Couldn’t ask for anything better on Senior Day,” Tillotson said.

Colgate currently sits No. 5 in the Patriot League, 9-7 in conference play. The Raiders hope to close the season on a positive note this weekend with a tilt against the Lafayette Leopards this Saturday in Easton, Pa.