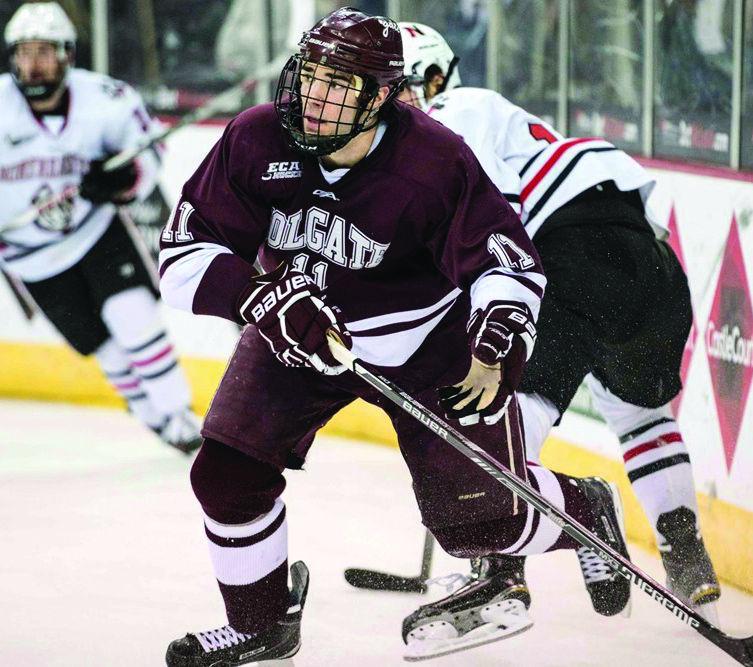 Colgate went 1-1 on the weekend, defeating the Princeton Tigers, 5-4, on Friday and falling to No. 1 Quinnipiac, 6-3, on Saturday in a pair of road ECAC matchups.

The Raiders scored three unanswered goals, including two early in the third period, to overcome a two-goal deficit late in the second period. Colgate used goals from first-year Adam Dauda and seniors Tyson Spink and Kevin Lough over a 6:52 span to post the one-goal victory and earn a season sweep of the Tigers.

Dauda began the comeback with his first collegiate goal. Firing a one-timer from the middle of the slot, he capitalized on a Raiders’ power play to make it a 4-3 contest.

Spink tied the game at 4 at the start of the third period, collecting a loose puck in the slot and beating Princeton keeper Colton Phinney with a backhander for his 12th goal of the season.

Lough put the Raiders in front for good with 5:19 gone in the final frame, firing home a rebound from the left face off dot after sophomore Mike Panowyk’s initial attempt was stopped by Phinney for his first goal of the season.

“It’s been a little frustrating. I’ve been battling the puck a little bit at times. It wasn’t pretty, but it’s a big relief,” the Kanata, Ontario native  Lough said.

Colgate junior netminder Charlie Finn finished the contest with 28 saves for Colgate. Phinney turned aside an impressive 40 shots for Princeton. With such strong performances from both teams’ goalies, it really came down to the offensive prowess of both of these teams. Luckily the Raiders were able to generate more good scoring opportunities.

“It was a really good comeback. The wins have been hard to come by, so any win is a good win. I thought as the game wore on we got stronger,” Raiders head coach Don Vaughan said.

Colgate has struggled this season finishing close contests, as the Raiders offense has not met many people’s expectations entering the season. Colgate’s attack averages only 2.59 goals per game, which is down from last year and good for only seventh in the conference.

Also, with key offseason departures on the Raiders’ defensive unit, Colgate has suffered on the penalty kill. The Raiders are only killing 75.8 percent of their penalties, which is 11th in the conference, and down nearly 10 percent from last season.

Colgate’s penalty kill faltered against top-ranked Quinnipiac, as the Bobcats scored three goals on the power play to hold off upset-minded Colgate, 6-3.

Junior forward Sam Anas notched the first of his two goals in the first period, finishing a one-timer from the middle of the slot during a power play opportunity to give Quinnipiac an early 1-0 lead.

The two teams then combined for four goals during a back-and-forth second period.

First-year defenseman Ken Citron answered on a slap shot from the top of the left faceoff circle, but the Bobcats quickly responded with a goal from junior defenseman Connor Clifton.

Junior forward Tim Harrison evened the score for a second time in the period, putting home a carom off the end boards, but first-year defenseman Luke Shiplo’s power-play strike with five minutes to play in the period gave Quinnipiac a 3-2 lead heading into the third.

Sophomore forward Landon Smith tallied the Bobcats’ third and final power play goal of the evening in the final frame to make it a 4-2 contest.

The two teams traded breakaway goals less than a minute apart later in the period. Anas scored his second goal of the evening to expand the Quinnipiac margin to three, but senior forward Darcy Murphy countered just 53 seconds later to keep Colgate within striking distance at 5-3. Junior defenseman Devon Toews closed out the scoring with an empty-net marker in the final minute.

“I thought we competed really hard tonight. We had some good chances. [Michael] Garteig made some good stops when they needed him to. It certainly wasn’t a 6-3 game in my mind,” Vaughan said.

Colgate returns home next weekend when they host No. 11 Yale February 12 in a 7 p.m. contest at Starr Rink. While the Raiders have certainly had a bit of a rough season, they have five remaining games in the regular season to turn it around. From their losses this season, it appears that there is still a lot of work to be done on the defensive side of the puck. In the Quinnipiac games, for example, the Raiders suffered three goals from the lack of execution on their man-down defensive unit, essentially giving Quinnipiac three easy goals. While there were certainly other factors at play here, the Raiders have a lot to work on this in the remainder of their games if they are to end the season on a high note. Hopefully the Raiders will bring a new level of intensity to their game against the Bulldogs this weekend and set them on the right course for the remainder of their season.