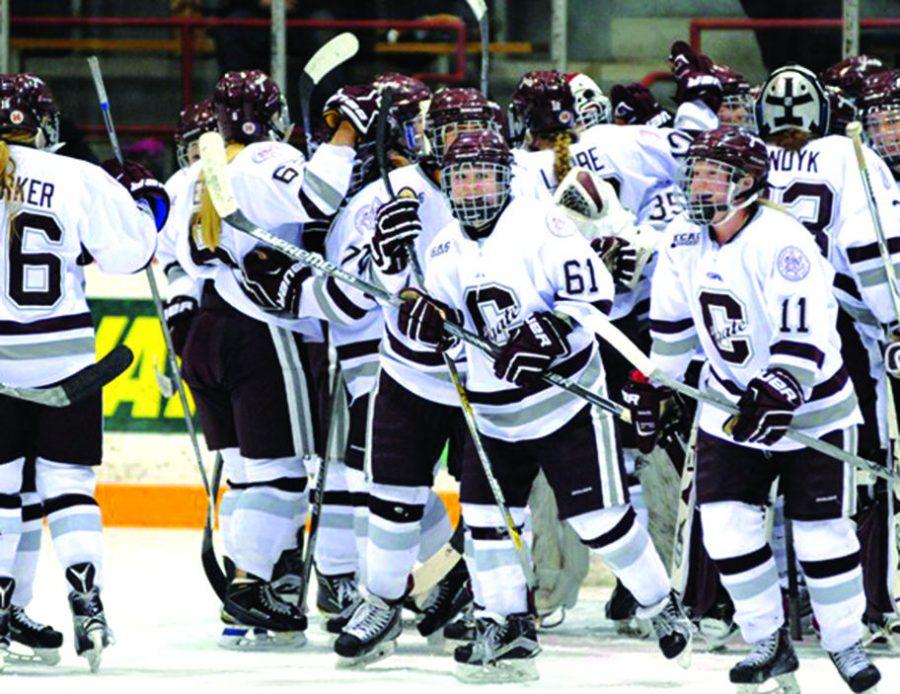 The Colgate women’s ice hockey team was back on its home turf as it took on the Princeton Tigers Friday evening at Starr Rink for the annual Autism Awareness game. The following afternoon they hosted the Quinnipiac Bobcats. Though the Raiders fell to the Tigers on Friday night, they were able to recover on Saturday, notching another win under their belts by defeating Quinnipiac, who currently sits atop the ECAC. At the conclusion of the weekend, Colgate’s record stood at 17-6-7, and their ECAC record moved to 9-4-5.

During Friday night’s matchup, both teams came out with fervor in the hope of bringing a victory. The game got off the ground quickly when sophomore forward and captain Annika Zalewski scored for Colgate in the third minute, thanks to an assist from first-year forwards Jessie Eldridge and Shae Labbe. However, the Tigers quickly caught up just two minutes later when first-year forward Karlie Lund was able to put the visiting team on the board. In the tenth minute of the first period, Princeton surged into the lead when junior forward Fiona McKenna and junior defender Kelsey Koelzer assisted first-year forward Keiko DeClerck in the team’s second goal of the game. Although Colgate had two power play opportunities throughout the remainder of the first period, the home team was unable to close the gap in that time. Throughout the second period, the teams continued to battle. In the eighteenth minute, the Raiders tied it up when sophomore forward Megan Sullivan scored, with the assist going to junior defender Cat Quirion and sophomore defender Lauren Wildfang. Going into the third period, the score stood tied at 2-2. However, with seven minutes to go in the period, Lund scored on a power play thanks to an assist from junior defender Molly Strabley and Koelzner. As a result, the Tigers were able to bring home a victory.

On Saturday, the Raiders were eager to redeem themselves when welcoming the Quinnipiac Bobcats. With 3:00 left in the first period, Zalewksi put Colgate on the board with help from Eldridge and sophomore defender Kaila Pinkney. In the second period, Colgate was able to widen their lead thanks to a power play opportunity, which resulted in sophomore forward Breanne Wilson-Bennett scoring with the assist going to first-year forward Bailey Larson and first-year defender Olivia Zafuto. Quinnipiac made good use of a power play opportunity in the thirteenth minute of the same period, when junior forward Meghan Turner scored off an assist from senior forward Nicole Connery and senior forward Nicole Brown. The Raiders scored once more before the second period drew to a close, with the goal going to Zafuto and the assist going to Larson. In the third period, Quinnipiac had one more goal in the twelfth

minute when sophomore defender Alicia Barry was assisted by Connery and junior defender Emma Greco. However, despite their efforts to close the gap, the visiting team was unable to recuperate and the final score stood 3-2 in favor of Colgate.

“That was a fun game to be a part of tonight. I’m proud of how our team responded after yesterday and throughout some of the ups and downs of that game today. We are finding different ways to win, which is a healthy sign,” head coach Greg Fargo said.

Next weekend, the Raiders are back on the road for their final regular season weekend of the year, taking on Yale in New Haven, Ct. on Friday night and Brown in Providence, R.I. the following day. As the Raiders are ranked fourth in the ECAC, this weekend is very important for them as they head into what will hopefully be a long post-season run. Both of these games can be