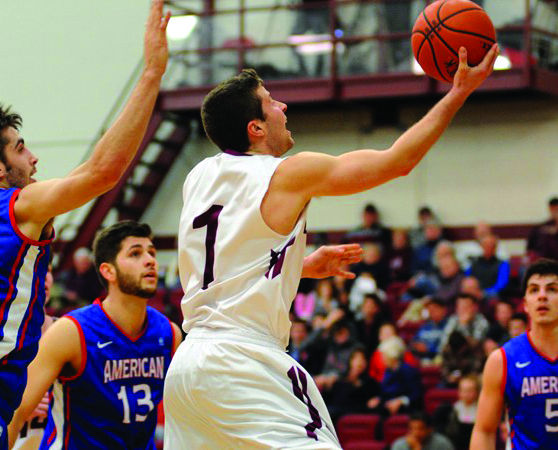 Senior captain and guard Austin Tilllotson tallied 10 points for the Raiders in their ultimate loss against the American Eagles.

The Colgate men’s basketball team suffered a loss at home against the American University Eagles on Saturday, breaking its four-game win streak. The game was a nail biter, as Colgate ended up losing 54-49, despite rallying late in the second half to bring the game within two with less than a minute left in the game.

In the first half, both teams demonstrated tenacious defense combined with slow poorly executed offense. Colgate racked up 11 turnovers alone in the first half. To add to the game’s sloppiness, American turned the ball over eight times as well as allowed a handful of uncontested defensive rebounds to bounce off their hands and out of bounds, giving the Raiders a number of second chances on the offensive end. Colgate managed to shoot the ball 20 times, getting 8 of their attempts to fall while American made 6-17 from the field. However, the Eagles got to the line 10 times, making seven of their free throws Colgate was far less aggressive getting to the line, making 3 of their 4 freebees. Overall, the score at the end of the half was close, 22-21 American, as both teams struggled to put points on the board.

The second half began with Colgate sophomore forward Tom Rivard scoring three straight points: a basket in the paint to take the lead, 23-22 and a made free throw on the next play to go up by two. For the next 10 minutes both teams battled, each taking turns scoring and reclaiming the lead from each other. Six lead changes occurred in the first five minutes, until Rivard again made a free throw to tie the game 32-32 with 14:56 left in the half. Sophomore guard Sean O’Brien scored a layup to take the lead 34-32, but again the game was tied at 34 when senior guard Jesse Reed scored a layup of his own. First-year center Dana Batt responded in the paint by scoring his one bucket of the game, giving the lead back to Colgate once again (36-34). Colgate followed up the basket by playing one of its best defensive sets of the period, closing out on shooters and forcing first-year guard Delante Jones to take a heavily contested three as the shot clock expired. But Colgate’s great defensive stand was to no avail, as the ball swooshed through the net giving American a one-point lead (37-36), and proving to be a pivotal turning point in the game. It would appear that Colgate’s confidence took a severe blow from the made basket, as they allowed American to score five additional points unanswered.

However, after going down 42-36 with 9:04 left in the game Colgate was able to turn their frustration into positive energy and began fighting back. O’Brien picked senior forward Marko Vasic’s pocket and took off dishing the ball to senior guard Austin Tillotson for a fast break layup, closing the gap to four (with 8:21 remaining). Unfortunately, just as Colgate seemed to be picking up steam, American came back ever stronger, making two free-throws and hitting a nicely timed open three-pointer in the corner. After that five-point stretch, American posted their largest lead of the game, 47-38.

With just over 6:30 left in the game, Colgate began one final stand. Tillotson scored a layup, Alex Ramon made a nice jumper in the paint and Tom Rivard made two free-throws to once again bring the Raiders within four, 48-44. With 1:15 left in the game, Alex Ramon again cashed in a made basket. This time he had fired from three-point territory, landing Colgate a two point deficit, their closest margin since they had given American the lead halfway through the second period.

Unfortunately, as had seemed to be the case all game long, every time Colgate looked like it was going to break away or make a comeback, American answered. On the next possession, Reed splashed a three-pointer, giving American another five-point lead, which would prove to be the dagger.

The biggest reason for Colgate’s defeat came from both lines: the three-point line and the free-throw line. American shot 18 threes, cashing in eight. Colgate shot a comparable 16, but only made four. Additionally, American went 14-21 from the strip, while Colgate was only able to get to the strip 11 times, making 7. The two key players for American were Jesse Reed and Delante Jones. Reed dropped 19 points and had an impressive stat sheet 7-10 from the field, 3-4 from three and 2-2 from the line, while Jones scored 15, making only 2-5 of his shots but 10-14 of his free-throws, as he proved to be a very aggressive first-year guard.

After another tough loss to Loyola, the Raiders are now 6-5 against conference opponents and close to the .500 mark overall, 10-12. Hopefully Colgate can bounce back from this hard fought loss, as the Raiders embark on a two game stint of road games, starting with Navy on Febuary 6. Colgate will return to Hamilton to play at home again against Bucknell in two weeks, Saturday, February 13. Until then, let’s hope Colgate can get it done on the road.