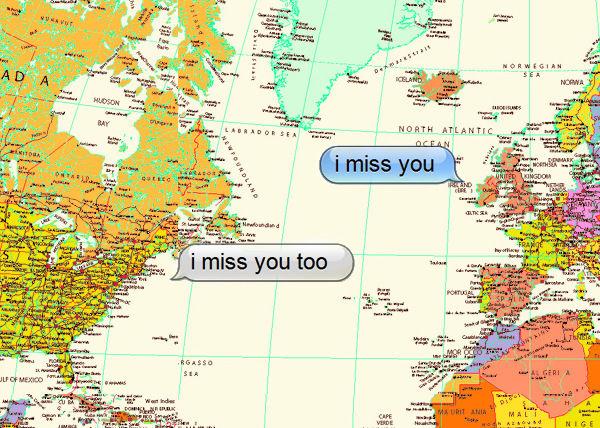 I thought I would come back from my semester abroad with a number of things: crazy stories, new friends, a few battle wounds and maybe even a tattoo to commemorate all my novel experiences. (Unfortunately, I chickened out of that.) I can honestly say that when I boarded that Heathrow-bound plane five months ago, the last thing I thought I’d return with was a boyfriend, which was exactly what happened.

At first, I was skeptical as to working things through once I finally returned home, but over the past three months I’ve learned that if you truly care about someone, distance becomes irrelevant. After being in a long distance relationship (LDR) – and by long distance I mean over 3,500 miles and a five-hour time difference – I have found that there are actually some major benefits.

You become extremely good at planning and prioritizing. When you and your partner live on completely different continents, it becomes important that you learn how to work around each other’s schedules. It’s the little things that count, whether that means you call him between classes or he stays up until 2 a.m. in order to say goodnight after your film screening wraps up. Sometimes hearing your significant other’s voice is just more important than a few more hours of sleep. When in an LDR it also becomes crucial that you plan your breaks well in advance – transatlantic flights can get expensive if you leave it to the last minute. I also plan all the logistics ahead of time in order to make the most of every moment we actually get to spend together.

You know it’s about more than just sex. Maybe I’ve just become hardened emotionally by Colgate’s notorious hook-up culture, but I used to have a hard time deciphering whether guys actually liked me or if they were just trying to get in my pants. But, when you’re in an LDR and don’t get to see each other for weeks at a time, you realize that your relationship is based more on emotional intimacy, not just physical intimacy. Now I’m not saying that you should abstain from sex. As long as all partners involved give consent, then go for it! All I’m suggesting is when you enter a new relationship, try to get to know their preferences inside the bedroom as well as outside. A little communication really does go a long way.

You can’t fake it. I have found that sometimes people tend stay in relationships because they are comfortable. Even though they might no longer have the same feelings for their partner that they once did, couples become lazy and stay together due to sheer convenience. But being in an LDR is anything but convenient. Both parties have to show they care enough about being together to put in the effort. Whether that means sending them cute postcards covered in cheesy pictures of Colgate or wishing their parents “Happy Birthday” without having to be reminded, you have to constantly show you are willing to fight to make it work. In relationships where couples live in close proximity to one another, it is easy to get lazy and take your partner for granted. In an LDR you have to be able to show that you care, even if that is from halfway around the world.

You get creative. Since you only get to spend a limited amount of time with your significant other and the breaks in between can span anywhere from weeks to months, it’s important to keep things interesting. When my boyfriend recently came to visit, I got the chance to be a tourist in my own city. Such activities included going to the Skydeck of the Willis Tower, getting drinks in the lounge at the John Hancock and taking cliché couple pictures on the boardwalk at Navy Pier. Since he is an aspiring musician, he has the capacity to write songs that actually encompass how he feels. He uses a fairly new app called Periscope where you can send out live streams. He will often times record songs that he has written for me on there and changes the settings to “private” so only I can see them. Honestly whenever he writes me a new song I cry… every single time.

I decided to ask my boyfriend his feelings about being in an LDR and he had this to say: “Longer distance does mean more time away, but when the two people finally meet again, they connect more, taking in every aspect of the other like a fresh breath of air. Other couples don’t have that opportunity.”