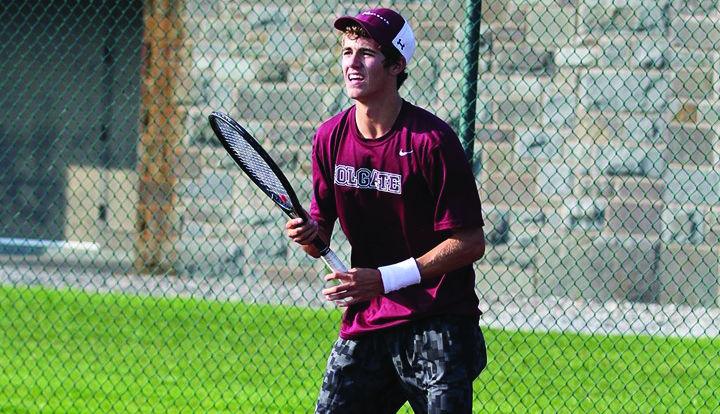 Junior Bobby Alter had a successful No. 2 Doubles match with senior captain Nick Laub in the match against the Sacred Heart; unfortunately, the Raiders lost 2-3.

Men’s tennis traveled to Connecticut this weekend, taking on Hartford University and Sacred Heart University on Saturday and Sunday respectively. The Raiders went into action riding a two-game winning streak to start the season, but were unable to extend their undefeated record to 4-0 after splitting the matches 7-0 and 3-4.

In typical Raider fashion, the Raiders swept the doubles matches to enter singles play against Hartford with a 1-0 lead. Head Coach Bobby Pennington attributed much of the Raiders’ doubles success to preparation.

“[We] work on doubles a lot in practice – it’s something I enjoy coaching. The guys have great chemistry on the court. [They] play with great energy and are very aggressive, [which] has helped us with results the past three years,” Pennington said.

The Raiders are looking to pick up where they left off last season, as the team has returned nearly all of last year’s key contributors, with the exception of former captain Alan Pleat who has since graduated. Coach Pennington said this will be a tough replacement to make, as Pleat contributed to the team at 2 singles and 2 doubles. Pennington did note, however, that the addition of first-year Noah Rosenblat will make this transition easier.

Colgate has added a few notable players this season to keep your eye on – Rosenblat is already contributing to the team at the mid-tier singles level, winning his match at the third position against fellow first-year Bryan Eintross in Saturday’s matchup against Hartford. Rosenblat showed great perseverance in this match, coming back to win 6-7, 6-3, 6-1 after dropping the opening set. On Sunday, Rosenblat continued his success, winning his matchup at third singles against first-year Derek Chapman 6-2, 6-4.

“He’s tremendously talented, and he’s going to be a part of the core for the next few years,” Pennington boasted.

On Sunday’s matchup against Sacred Heart University, the Raiders fell by a final score of 4-3. In atypical fashion, the Raiders began the match by dropping the doubles point, something the Raiders have been accustomed to securing for most matches the past three seasons.

“[We] really missed [junior Jake] Hirschberg [Sunday] night because of injury, and it was definitely something that threw us off a bit,” Pennington said.

With Hirschberg going down before the match, Pennington had to make a few adjustments, moving around doubles teams and pushing the latter half of the singles ladder up one spot each to fill-in at the five spot for Hirschberg. This shuffling certainly impacted the match, with the Raiders failing to secure the doubles point, in addition to dropping matches at the five and six singles spot.

At the five and six singles spot, Haile and Derose lost their respective matches 6-4, 7-5 and 6-4, 6-4 against sophomore Mathieu Pilote-Schraenen and sophomore Cory Seltman.

The Raiders have their sights set on making an even deeper run into the postseason than they did last season. They came up short against Bucknell University in the playoffs last year, falling one singles match short of a second place finish in the Patriot League.

“It’s always a big goal to win our first Patriot League Championship. We want to peak in mid to late April this year, so we can play our best tennis at the Lehigh tournament. I think we peaked about two weeks too early last season,” Pennington said.

The Raiders look to continue their success Saturday, February 20 when they host Rochester University in Sanford Field House at 10 a.m.