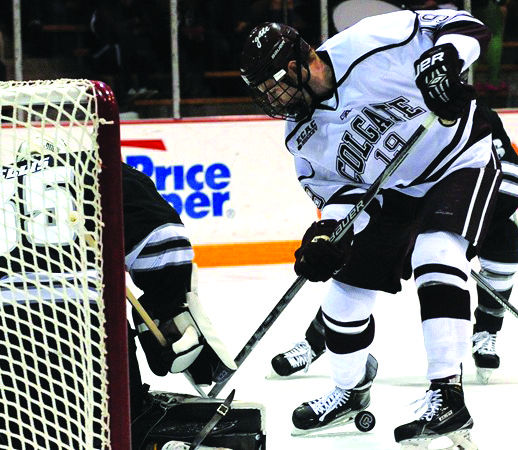 Junior forward Tim Harrison tallied one of the two goals in the Raiders’ game against the Big Green; unfortunately, the Raiders fell 2-3 to Dartmouth.

Colgate went 0-2 on the weekend, with losses to No. 8 Harvard on Friday, and a red hot Dartmouth on Saturday. Both matches were home, in what will be the Raiders’ last season at Starr Rink.

Kyle Criscuolo’s power play goal midway through the second period broke a 2-2 tie and lifted Harvard to a 4-2 victory over Colgate in the ECAC matchup.

The rematch of the 2015 championship got off to a high-paced start as the two teams scored three goals during the opening 7:30.

Harvard took a 1-0 lead just 3:04 into the contest when junior forward Sean Malone knocked home a loose puck from the middle of the slot to give the Crimson the early advantage. Senior forward Mike Borkowski answered, tallying the equalizer 1:41 later, finishing off a scramble in front of the net.

Alexander Kerfoot restored Harvard’s one-goal margin at the 7:30 mark of the first, putting home his own rebound during a 4-on-4 opportunity to take a 2-1 lead for the Crimson.

Borkowski once again tied the game for Colgate, deflecting a shot past Merrick Madsen, making it a 2-2 contest. It was the fourth multi-goal performance of Borkowski’s career, and his second this season. It was also the 17th

multi-point performance of his career.

Criscuolo notched the game-winner with 11:39 gone in the second period, deflecting a point blast from Colin Blackwell past junior netminder Charlie Finn to give the Crimson a 3-2 edge. Finn was outstanding against the high-powered Harvard attack, turning away 35 shots.

Jimmy Vesey closed out the scoring with an empty net goal with 43 seconds remaining to determine the final margin.

“I thought we played hard tonight. I liked our first and I really liked our third. We’ve got to resolve whatever is happening to us in the second period. We’re getting caught, we’re getting hemmed in and our defensemen are getting tired,” head coach Don Vaughan said.

Colgate has struggled all season with controlling time of possession, leading to a high shot differential. Opponents have out-shot the Raiders 31.7 to 26.4, an average of 5.3 shots per game this season. Their woes with puck possession continued against Harvard. The Crimson held a 39-27 shot advantage for the contest. Harvard out-shot the Raiders in all three periods, highlighted by a 15-5 margin in the second.

The Raiders puck possession was much stronger in their 3-2 loss against Dartmouth. Colgate held a 30-29 shot advantage for the contest. The Raiders out shot the Big Green during the first (11-7) and third (8-7) periods while Dartmouth held the edge in the second (15-11).

“I was proud of our guys the whole game. I thought our efforts were phenomenal tonight,” Coach Vaughan said.

The Big Green quickly countered with goals from Troy Crema and Carl Hesler to tie the game at 2-2. Crema beat Colgate’s sophomore goalie Zac Hamilton with a shot from the right faceoff dot with 7:01 gone in the first. Helser tied the game with a backhanded stroke 1:25 later.

Tim O’Brien scored at the 2:47 mark of the third period to break a 2-2 tie and lift Dartmouth to a 3-2 victory. Finn replaced Hamilton in net for Colgate after the second Dartmouth goal, finishing the game with 26 saves. Grant turned aside 28 shots for Dartmouth in their successful effort against the Raiders.

It appears that Colgate’s offseason losses have hit harder than people expected, as the 2015 ECAC runner-ups sit at a disappointing 7-16-2 on the season. The Raiders face off against St. Lawrence on January 29th for an 8:00 pm contest at Appleton Arena. After that, the Raiders will travel to Hobey Baker Rink to battle the Princeton Tigers.