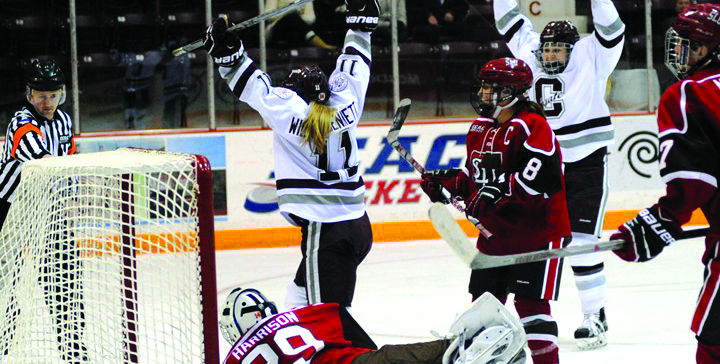 Sophomore forward Breanne Wilson-Bennett tallied the only Raiders’ goal in their game against St. Lawrence this past weekend, putting the puck in the back of the net with just six minutes left in the third period.

This past weekend, the women’s ice hockey team defended its home turf, taking on the Saint Lawrence Saints on Friday afternoon and the Clarkson Golden Knights the following day. While the contest against Saint Lawrence ended in a 1-1 tie, the Raiders were unsuccessful in their campaign against Clarkson the next day. At the close of the weekend, Colgate’s overall record stood at 14-5-7, and their ECAC record moved to 6-3-5.

On Friday, the competition between the Raiders and the Saints began at 3:00 pm at Starr Rink. Though the game-starting faceoff was won by Colgate, the teams were neck-and-neck for the first part of the first period. In the 14th minute of the first period, sophomore forward Kennedy Marchment put Saint Lawrence on the board following an assist by junior defender Alex Moore and junior forward Brooke Webster. For the remainder of the first period and the entirety of the second period, the Raiders were able to hold the visitors and fought to put some points on the board, but were unable to do so until the third period. In the eighth minute of the third period, Saint Lawrence was penalized when senior defender Dominique Korakianitis was assessed a two-minute penalty for checking. As a result of the penalty, sophomore forward Breanne Wilson-Bennett was able to score on a power play in the ninth minute, assisted by first-year forward Shae Labbe and sophomore defender Lauren Wildfang. The teams continued to battle fervently through the end of the third period, but neither squad was able to score again through the end of regulation, forcing the game into overtime. However, the game remained tied throughout the duration of the overtime period, and as a result the final score stood at 1-1. At the game’s conclusion, Saint Lawrence was 0-for-2 in power play opportunities. Colgate was 1-for-1, while first-year goalie Julia Vandyk recorded 23 saves, which brought her career total to 290.

The next day, the Raiders came out hungry for a victory, eager to defend their home turf against Clarkson, the No. 5 team in the nation. In the game’s 13th minute, sophomore forward Shelby Perry scored the first goal of the game for Colgate during a power play, following an assist by sophomore forward Annika Zalewski. The score remained stagnant until the first minute of the second period when sophomore forward Megan Sullivan scored following an assist by Wilson-Bennett and first-year forward Bailey Larson. Five minutes later, Clarkson got on the board when first-year forward Rhyen McGill scored off an assist by sophomore forward Lauren Lefler and sophomore forward Amanda Titus. Clarkson scored again in the 15th minute when junior forward Genevieve Bannon was assisted by freshman forward Loren Gabel. The visiting team was able to gain the lead over the Raiders when Bannon was assisted by senior forward Shannon MacAulay. The final score for the game was 3-2, with the visiting team coming out on top. The Raiders were 1-for-2 on power play opportunities and the visiting team was 0-for-2, while Vandyk recorded 25 saves.

“We knew tonight was going to be a tight game, and it certainly was a good game against a good ECAC Hockey opponent,” Colgate head coach Greg Fargo said of the contest.

Next weekend, the Raiders will take their campaign on the road when they travel to Rensselaer to take on the RPI Engineers on Friday, and to Schenectady to compete against Union College on Saturday.