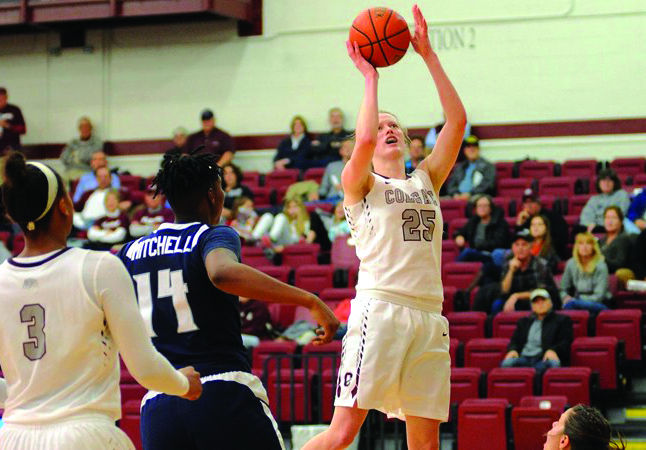 Senior captain, Josie Stockill, tallied 13 points in the Raiders’ game against Loyola; unfortunately, the Raiders lost to the Greyhounds, 65-49.

The varsity women’s basketball team finished this week with two Patriot League battles against Boston University and Loyola. The Raiders started strong with a win against the Boston University Terriers, 72-63, but faltered against Loyola, 49-65.

The Raiders’ game against Boston University was their first win against the Terriers ever.  According to head coach Nicci Hays Fort, their victory was owed to the team’s consistency on the court.

“We had a great game plan for the Boston University game, and our players really came out and stuck to the plan. They were very consistent on their energy level and their focus to details, so that’s how we were able to win,” Coach Hays Fort said.

Junior Katie Curtis managed to achieve two career highs against Boston University by scoring 20 points, including four three-point baskets.  Curtis said that the game served as a good learning experience for them in terms of discovering what works and what does not.

“We have seen a lot of success, especially at BU, in sharing the ball and making extra passes to get the best scoring opportunity for ourselves,” Curtis said. “We also know that pressuring the other team is also imperative for our success.”

Currently, the Raiders have a record of 2-6 in the conference, and have their sights set on hosting the first game in the Patriot League Championships.

Hays Fort reflected on the season so far. “Our season has been on some highs and some lows.  We have some inconsistencies because of our youth. We’ve also had some pretty significant injuries, but we’ve shown a lot of improvement.  We’ve continued to grow and improve and now we’re trying to find some consistency through those injuries.”

One of the main goals that the Raiders are trying to achieve game-by game is to keep their opponents’ top shooters below their scoring average. According to first-year Chelsey Koren, they were able to reach this goal in their game against BU.

“The Boston University game was a great road win for us,” Koren said. “We made a lot of shots and did a great job of attacking the rim.  We also had a great defensive game and were able to hold BU’s top scorers below their averages.”

Koren earned her career-high record by scoring 12 points during the game, amounting to 27 points for the season so far. Looking towards the rest of the season, Coach Hays Fort has specific goals in mind that the women may work towards in order to play in the tournament.

“Offensively, we want to have a positive turnover ratio, and shoot over 40 percent in all of our games. Also, we want to shoot more free throws, and score at least 6 baskets in transition.”

Coach Hays Fort also mentioned that the women have performed with great individual success, and are now looking to take that talent and build it together as a team. Senior Captain Josie Stockill is currently leading the country in blocked shots per game, a remarkable feat for the Colgate basketball program, and an advantage they will certainly carry into the rest of their season. Once the Raiders are able to overcome injuries and take their practice performance to game days, they hope to turn their record around, which is still very possible with upcoming games against American and Holy Cross.

“Our record does not reflect our team’s talent and hard work, and we are hoping to prove that in the second half of Patriot League play. We have put in a ton of hours between practice, film, team building activities, etc. that have contributed to our season as well. We think that this next half of Patriot League is the perfect opportunity to show our team growth,” Curtis said.