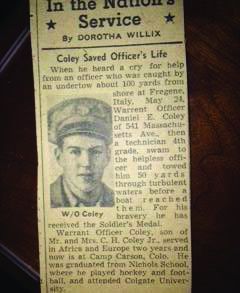 The Cornell-Colgate hockey rivalry took on a new meaning after the teams returned from  WWII.

The crowd gathers around the outdoor rink behind Huntington Gym for Colgate’s home opening ice hockey game against archrival Cornell. It’s the winter of 1946-47 and the men are happy to be back on the ice after years of the disruption of war. The two teams take their positions for the opening face-off.

As the puck drops, a Cornell winger flies over the ice and starts pounding Colgate defenseman Dan “Barrel” Coley ’47 with all of his might. Coley received his nickname, “Barrel,” because no one could get through him or around him on the ice. Naturally, Coley fights back; the two players have had a long-term acquaintance on the ice. Gloves drop. Helmets off. Fists fly. Both skaters are ejected from the game.

Bruised and bloodied on their way to the locker room, the Cornell winger says to Coley, “I’ve been waiting to throw those punches for years. You saved my life. Let me buy you a beer and tell you why.”

The two veterans head downtown. They get to the bar, order a couple of drafts and begin recounting their war experiences.

Coley enlisted in the Army after completing his sophomore year at Colgate. Originally in the class of 1944, he spent three years in active duty participating in the invasion of North Africa and Italy and serving in the 10th Mountain Division.

The Cornell winger recounted how he had been taken a prisoner of war in Czechoslovakia. It was brutal. But the mantra that kept him going was: “I’m going to get back on the ice and pummel Dan Coley.”

Smarts and willpower enabled the Cornell winger to escape from the P.O.W. camp. Making his way through barbed wire, snow and near-starvation, he kept repeating the mantra over and over: “I’m going to get back on the ice and pummel Dan Coley.”

The Cornell winger snuck through Nazi-controlled enemy lines, found his way to friendly territory and was reunited with his unit. And now both men were re-engaging with life they’d left behind years before in upstate New York.

Coley’s unflappable, unmovable stature on the ice had served as the ultimate inspiration to one of his opponents off the ice.  The war ended but the Cornell winger never forgot what got him through. He said slugging Dan Coley that afternoon on the Hamilton rink was the most satisfying moment of his life.

As a defenseman, the Barrel’s ability to stand so strong against anyone who challenged him was an inspiration to his teammates, to the fans and as it turned out to at least some of his opponents.

This is the kind of story that exemplifies the kind of fierce determination, leadership and the will to win that marks Colgate’s most outstanding athletes and most of our war heroes. On Veteran’s Day we remember these remarkable men.

The Dan “Barrel” Coley Award has been presented annually to the Best Defenseman on the Colgate men’s ice hockey team since 1982.