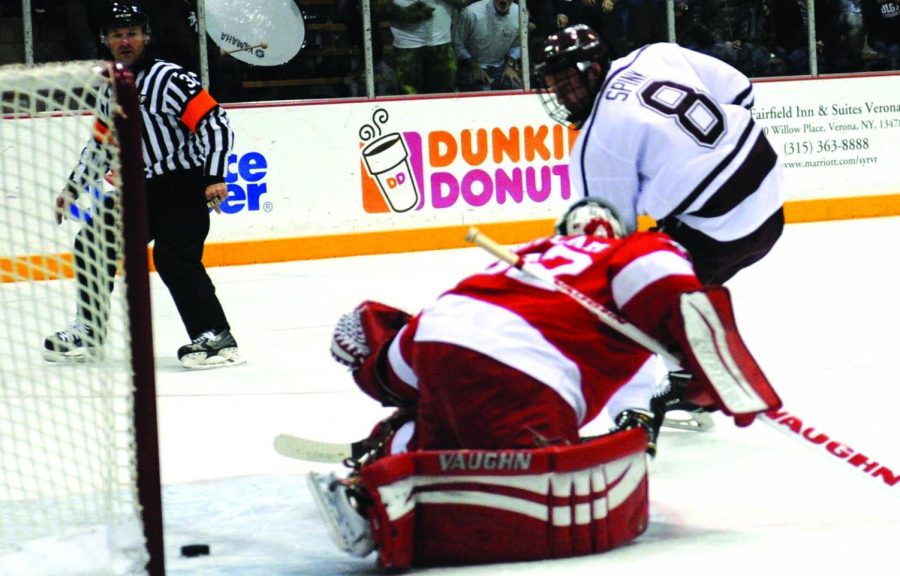 Senior forward Tyson Spink put Colgate on the board in the second tilt against Cornell in the first period; unfortunately, the Raiders still lost.

The men’s hockey team faced their archrival Cornell Big Red this past weekend in a home-home series that started at Lynah Rink Friday evening. After a 5-1 defeat in Ithaca in the first game of the weekend set, the Raiders fell again to Cornell the next night, this time in overtime as a goal from first-year forward Anthony Angello 70 seconds into the period gave the Big Red the victory.

Competing at Lynah Rink on Friday evening, the Raiders saw the Big Red jump out to an early lead, as two goals in the first 2:17 of the first period put the Big Red in the driver’s seat. A Raiders penalty kill early on held the deficit at two, and when the Raiders found themselves in a 5-on-3 situation after two consecutive Big Red penalties, Colgate was able to capitalize.

Just as the first minor penalty ended, senior captain Mike Borkowski scored for the Raiders, off assists from junior defenseman Brett Corkey and senior forward Tyson Spink, to halve the Cornell lead. The Raiders hoped to enter the middle frame with the deficit at one, but a Big Red tally in the final two minutes would extend their lead to 3-1 and push momentum back in favor of the home team.

The second period began and after seven minutes, the Big Red furthered their lead with a goal from junior defenseman Patrick McCarron. Despite a Cornell penalty that put the Raiders on the power play later in the period, the offense sputtered. The Raiders were stymied all night by junior goalie Mitch Gillam, who recorded 19 of his 23 saves in the final two periods en route to a Big Red victory.

A goal late in the second period would extend the Cornell lead, and prove to be the 5-1 final score of the game. After recording 10 saves in the first two periods, junior goalie Charlie Finn was pulled in favor of sophomore goalie Bruce Racine, who started the third period and finished with five saves.

After the difficult loss, the Raiders returned home to host the Big Red the following night. In what was the final matchup at Starr Rink between the two rivals, the Big Red came away with the victory, denying the Raiders of picking up any league points this weekend.

The customary packs of Big Red chewing gum poured from the stands onto the Cornell side of the ice prior to the puck drop, and the Raiders responded well to the crowd of 2,213 that packed into Starr Rink on Saturday evening. Just 3:40 into the opening frame, Tyson Spink got the Raiders on the board with a beautiful unassisted goal.

The Raiders were on top of the Big Red early and often, as five Cornell penalties gave the Raiders the man advantage for much of the first period. A goal from McCarron with just under five minutes, remaining evened the score, but the Raiders power play finally came through towards the end of the period.

Capitalizing on the fourth Big Red penalty in the period, the Raiders’ first power play unit produced its second goal of the weekend, as senior forwards Tylor Spink and Darcy Murphy worked the puck to Corkey, whose shot made its way through a crowd and into the net past Gillam. The Raiders would hold the Big Red through the final minutes and enter the second period with a lead.

A holding penalty from junior defenseman Anthony Sanniti put the Big Red on the man advantage, and junior forward Matt Buckles converted for Cornell tying up the game. After a third period that saw Finn and Gillam record 12 and seven saves respectively, the teams were tied and headed to overtime.

Just 70 seconds in, Angello scored from the right side of the ice, slipping one past Finn and giving the Big Red the big victory over their rivals. The loss drops the Raiders’ overall record to 4-7, while their ECAC record sits at 1-3. This weekend, however, the Raiders look to buck the losing league trend, as they hit the road for back-to-back matchups against Brown and Yale.