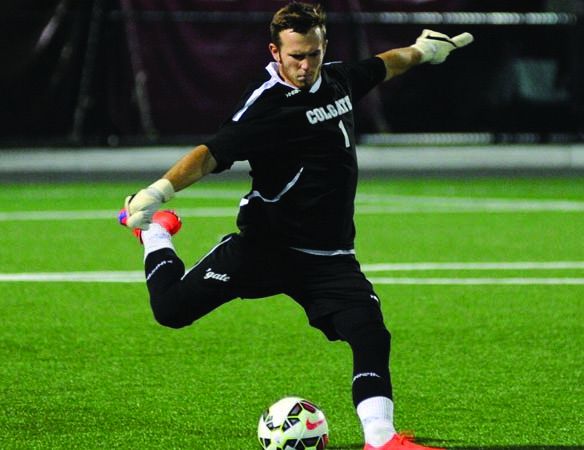 This past Saturday, the men’s soccer team played the Lafayette Leopards in the last game of the season. Knowing they needed one more victory to clinch the Patriot League title, the Raiders came out firing and ended up with a 3-0 victory over Lafayette. As the Patriot League Champions, the team secured the No. 1 seed and home field advantage throughout the entire Patriot League Tournament.

The Raiders haven’t hosted the tournament since 2010, so this was a particularly satisfying achievement. Sophomore defender Bruno Scodari commented on the significance of the victory.

“It means a lot considering last year we had two wins in league play. All our hard work has paid off and we’ve definitely come a long way. Hopefully we can get a good turnout this weekend,” Scodari said.

For the first five minutes of the game, Lafayette continuously pressured Colgate’s back line and had a few good opportunities. After that however, the Raiders got their feet under them and began to assert their dominance. The first real goal-scoring opportunity came in the 15th minute when junior forward Ethan Kutler fired a free kick that was barely punched away by the Lafayette keeper Brad Seeber.

In the 20th minute, senior captain Tyler Forbes was taken down in the box and awarded a penalty kick. Kutler, the leading scorer on the team, stepped up to the challenge and nailed the ball directly into the lower left corner of the goal. This goal ultimately proved to be the game winner and was Kutler’s 24th career goal. At half time, the score was 1-0 in favor of the Raiders.

In the 70th minute with the score still 1-0, junior goalkeeper Ricky Brown stopped a point blank header and preserved the victory for Colgate. Brown finished with four saves and came away with his sixth shutout of the season.

In the 75th minute, sophomore midfielder Jared Stroud sent a beautiful corner kick into the box that was finished off by junior defenseman Zach Tamen. The scoring didn’t stop there. Soon after, first-year forward Ben Snider sealed the victory when he blasted a rebound past the Lafayette keeper. With only two minutes left in the game, the Raiders held tough and maintained their 3-0 victory.

Colgate outshot their opponents 13-9, and improved their record to 10-6-2

Colgate receives a bye during the first round and awaits the lowest seed to emerge from the quarterfinals. The quarterfinal matchups are between No. 3 American and No. 6 Army, as well as No. 4 Lehigh versus No. 5 Bucknell. The Raiders will then host the seminal game at 4 p.m. this Friday on Beyer-Small ‘76 Field.

While the team is overjoyed with its regular season title, its ultimate goal is to be Patriot League champions. Whether they can achieve this goal will be decided this weekend. Regardless of Colgate’s semifinal result, the championship game will take place at 1 p.m. this Sunday. The Raiders hope to capture their first league title since 2011.