Colgate Day Celebrated by Campus Community and Alumni Around the World 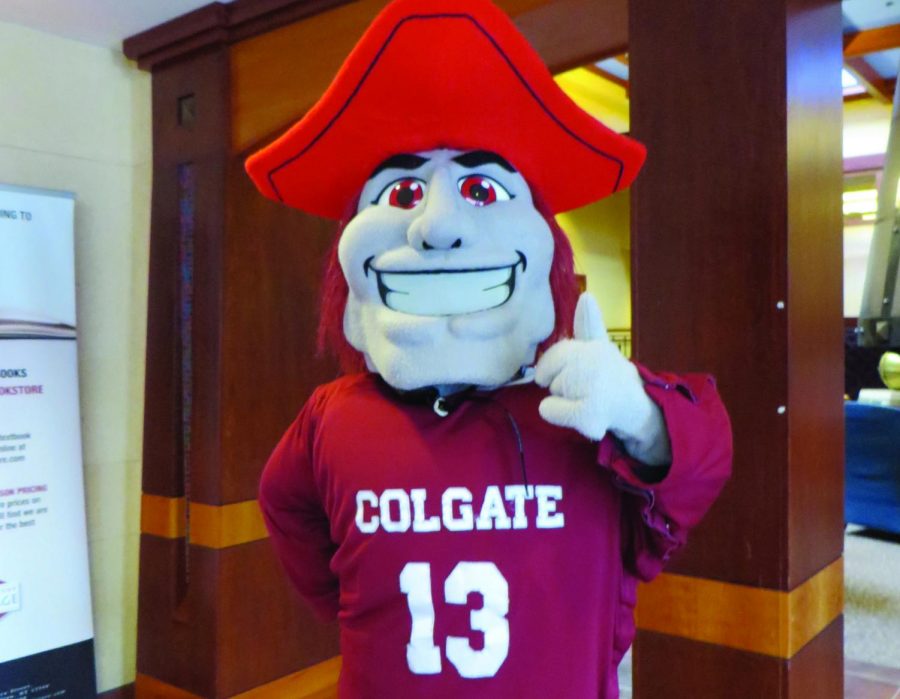 The Colgate Raider greeted students and posed for pictures between classes at the COOP.

The first Colgate Day of this academic year was marked by a plethora of successful activities, despite the cold, blustery weather. Colgate Day, observed every Friday the 13th, is a day of celebration meant to foster school spirit and honor the significance of the number 13 in Colgate lore.

The first of the Colgate-themed activities was a “Torchlight” Brown Bag organized by Colgate’s Konosioni Senior Honor Society. The event took place at the Africana, Latin, Asian and Native American (ALANA) Cultural Center on Thursday, November 12 at noon. Dozens of students–as well as administrators, including Associate Vice President and Dean of Students Scott Brown and Vice President and Dean of the  College Suzy Nelson–were in attendance.

Student panelists opened the event with an overview of the history of the Torchlight ceremony at Colgate. Following the presentation, there was a student-led discussion about the ceremony’s significance to the Colgate community, which centered around issues of tradition and exclusivity. Students raised concerns that the use and imagery of robes and torches possess racist undertones. This leads to the question of whether long-held traditions can adapt to a continually changing campus climate. While no change has yet been made to the Torchlight procession, the students involved in the brown bag hope that this will spur a greater conversation about “Torchlight” and other traditions on campus.

The next day kicked off with “A Spark Starts A Fire,” a s’mores roasting event hosted by the Presidents’ Club, Konosioni and the Giving Circle at the O’Connor Campus Center (COOP). The name of the event referred to both the marshmallow roasting that took place and the positive effects that arise from philanthropy and giving back to the community. In addition to the s’mores stations, there was a photo booth where students were able to take pictures with the Raider, as well as an a cappella performance by the Colgate Resolutions. There were also many give-aways that promoted school spirit, such as Presidents’ Club laptop stickers and “Project 13” posters.

Along with its aim of fostering a unified community spirit, “A Spark Starts A Fire” provided the Presidents’ Club with a venue for its student leaders to explain their mission of “tradition, leadership and impact,” and recruit new members to join the organization that contributes over 90 percent of the annual funds received by the university. Students were encouraged to join the Presidents’ Club as part of a new student-led initiative that allows all undergraduates to join the club by making a gift of $13 in honor of the original $13 given in the traditional story of the university’s founders. Student members of the Presidents’ Club explained the importance of supporting the continued success of the university and emphasized that students can designate where their gifts go, such as specific student organizations or academic departments.

Chair of the Presidents’ Club Amy DiSibio ’86 attended the event and commented on the way that the club has encouraged students to contribute at an affordable rate.

“The Presidents’ Club lowered its giving rate for students to $13 (from $100) because we feel it is incredibly important for all of our students to have the opportunity to join the group of leaders who gift more than 90 percent of what is given to Colgate annually. We are hopeful that the Presidents’ Club can help our students establish a pattern of giving to Colgate, right now while they are on campus, so that they can feel the impact they are making for themselves and for those around them. As our students become alumni and grow to appreciate the value of their Colgate eduction even more, we hope they will stay engaged with Colgate not only as donors, but as supporters and proud graduates,” DiSibio said.

Presidents’ Club member junior Lila Sullivan said the event was significant because it helped students realize the ease and benefits of becoming a member.

“It’s very approachable and it’s easy for students to reach their payment plans. People who want to join can donate just one dollar a month and be a part of the Presidents’ Club and have access to these amazing alums and see that you’re giving back,” Sullivan said.

Konosioni also held a letter-writing campaign concurrent to “A Spark Starts a Fire,” where students could thank alumni and faculty members who have positively shaped their Colgate experiences.

Events moved down the hill later that afternoon to the Parker Commons and 100 Broad Street for the Colgate Day Block Party and Jamnesty, respectively.

A host of organizations came together to organize the Block Party, including Bunche House, Class Council, the Creative Arts House, Gamma Phi Beta Sorority, the Israel Club, Konosioni and Outdoor Education. Group members and attendees chipped in by bringing dishes to the potluck meal to share.

Meanwhile, those who visited Jamnesty were treated to live music and food catered by the Royal Indian Grill. During the meal, those who attended were encouraged to add their signatures for petitions speaking out against

Local businesses also helped students celebrate Colgate Day with special deals. These included the Colgate Bookstore’s 13 percent off sale, YoGate’s offer of a free frozen yogurt for every thirteenth customer and a $13 entree special at the Colgate Inn.

However, the festivities were not just limited to Hamilton. Alumni clubs hosted get-togethers all across the country, from San Francisco to Pittsburgh and Santa Fe. Many pictures of these celebrations, as well as the hashtags #colgateday and #colgateeverywhere, were shared on social media.

Associate Vice President of Institutional Advancement and Alumni Relations Tim Mansfield commented that in other years Colgate Day has served as an important time for fundraising, citing the record-breaking $5.3 million raised by over 5,500 donors on December 13, 2013. However, this year the Colgate community concentrated on a different outcome.

“[This year] we focused on simply celebrating the bond that connects the local and global Colgate family,” Mansfield said.

This spirit of unity amongst the Colgate community impressed first-year Allie Cunningham during her first Colgate Day.

“I like seeing everybody in their Colgate gear. I think it’s pretty cool that there’s a lot of school spirit here, and it’s fun that we pick a day that we can all represent,” Cunningham said.

Sullivan echoed these sentiments about the infectious spirit of Colgate Day and how it fosters a sense of community.

“I think Colgate Day is really special because it pulls together all Colgate alums and students at Colgate to remember what this place means and how it was started… It helps me remember that being a part of this school is more than just myself,” Sullivan said.