The Saga of Johnny Football 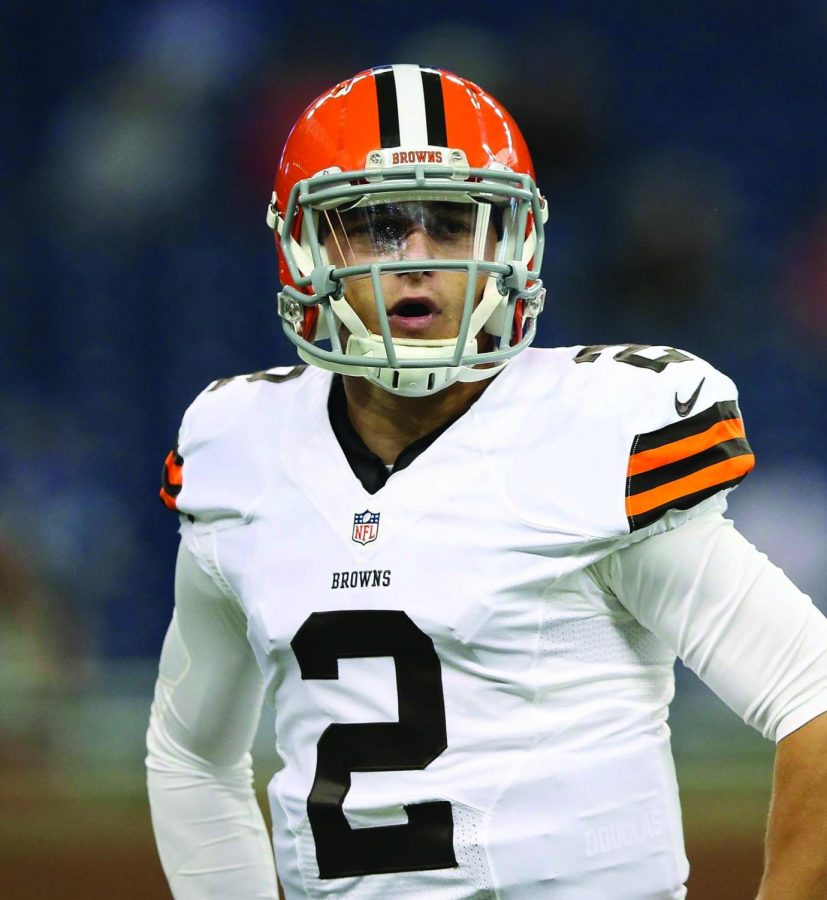 The tumultuous career of Johnny Football has been a spectacle for fans, and many question whether he can be successful in the NFL.

By now every casual football fan knows the story of Johnny Manziel. The quarterback so famously dubbed “Johnny Football” rose from hometown hero to national superstar almost overnight during his time playing for the Texas A&M Aggies. Manziel displayed a unique style of improvisation in the pocket during the 2012 college football season, which helped his team secure a massive upset win against the Alabama Crimson Tide in Tuscaloosa. Johnny Football shocked the world again becoming the first freshman to ever win the Heisman Trophy and Davey O’Brien Award, marking him the best player amd top quarterback in college football respectively. Manziel’s second season seemed to be just as impressive, leading to many more personal accolades, a second straight Heisman finalist nomination.

Leading up to the 2014 NFL Draft, Manziel’s potential was a hot topic. Some analysts saw Johnny Football as a mid-round draft pick. They thought his reckless style of play, short stature and questionable character made him a risky prospect who could easily flame out in the future. Others thought of him as a first round talent because of his athleticism and competitive fire. However, one thing was for sure: no one knew where Manziel would be playing professional football. Come draft night all of the cameras were on Johnny, who decided to attend the draft in New York City. As the night wore on, Manziel’s face slowly slipped from a smile to a concerned glare as 21 teams passed on him. Finally, at No. 22 overall, the Cleveland Browns took him with their second pick of the night. Almost instantaneously, the city of Cleveland surged with excitement.

The 2014 Cleveland Browns team was in a situation Cleveland was all too familiar with; a new head coach hired after another long losing season, a new quarterback and just a little sweet sliver of hope that maybe the playoffs were a possibility. The only thing that was truly new and exciting was the star power of Johnny Football. However, things did not go as the fanbase had hoped. Manziel began the season on the bench as the backup to Brian Hoyer, and displayed his trademark immaturity during the preseason when he flipped the bird to the Washington Redskins bench. Johnny’s first regular season action took place in November when he replaced the ineffective Brian Hoyer against the Buffalo Bills, a game in which he scored the Browns’ lone touchdown in a losing effort. Manziel started two other games in 2014, both of which he seemed overwhelmed and ineffective.

Come the 2015 season, things did not look any better for Johnny Football. During the offseason he checked into rehab for his longstanding tendency to abuse alcohol, and the Browns signed free agent Josh McCown to compete with him. Johnny didn’t play much in the preseason, but reports confirmed that Manziel was improving. So far this season, Johnny has played in three games, two of them starts because of injury to McCown. His play has wildly jumped around the map. Against the Jets, he completed a beautiful 54-yard bomb for a touchdown, but then proceeded to turn the ball over three times. Later against the Titans and Bengals, Johnny played cautiously. He threw three touchdowns with no interceptions while keeping his passing yards under 200.

Despite Manziel’s recent performances, he is simply not built to succeed in his current situation. The Browns are infamous for having their quarterbacks flame out, and it doesn’t appear that Manziel will break the mold. If Manziel is to succeed it will be in a stable organization that can handle his antics and help him fix his issues on the field. Without a change of scenery, the legend of Johnny Football will remain only in the history books of Texas A&M.