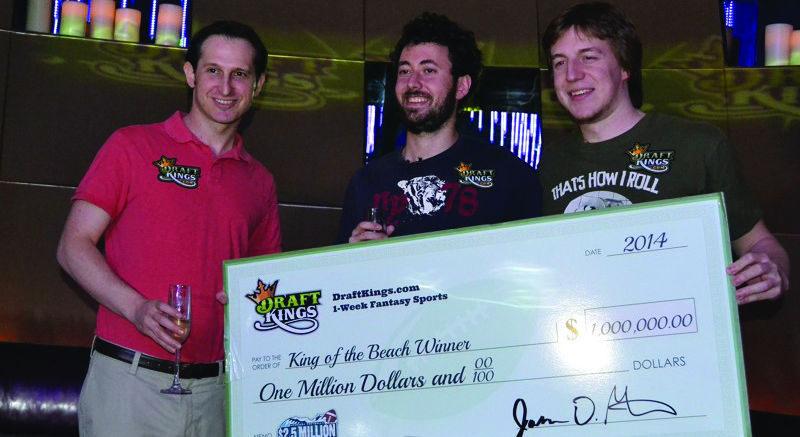 DraftKings and Fanduel have used big winners like these as promotional tools in their frequent advertising during sporting events.

If you have seen any professional sport on TV in the last year, you have surely seen an advertisement for a “one week fantasy league” such as FanDuel or DraftKings. In these types of games the consumer will typically enter into a contest with real money. This may be an NFL, MLB, NBA or NHL weekly league. One entry will typically cost one five, ten, twenty or up to 1000 dollars. Then they will choose a team based on a set salary cap where the better players cost more of the artificial salary. For example, you could choose Tom Brady for your weekly line up but he will take a large share of the total money and you will have less money to spend on the other players in your lineup. The whole mentality of this game is to enter into a contest with thousands of others for real money and then spend imaginary dollars on players who you think will perform well for that upcoming week.  The way that this is legal in many states, but online poker isn’t, is because these websites claim that this is not entirely gambling but a skill based game. Authorities are arguing that this form of fantasy sports is entirely based on chance and is therefore illegal. The New York state Senate just ruled that this was illegal and would be disallowed in the state; opening up the door for many other states to illegalize this sports gambling.

The big question that will be argued in court for weeks to come is if FanDuel and DraftKings based entirely on chance or is there some skill involved? This question will be debated by lawyers for the state and by those representing private companies. Speaking as someone who has participated (and lost a lot of money) on these websites, I can say that there is skill involved and that they should be legal. I believe that in order to be successful at gambling with these websites, there is much more than chance involved. To pick the right players at the right time takes dedication to the sport, the willingness to do research and certainly some degree of luck. One thing that I always do before I choose my players for that week’s NFL game is study the matchups and look at the injury reports. This certainly takes more than just a lucky guess on who is going to have a breakout performance that week. The recipe for a successful FanDuel or DraftKings lineup is a lot more than just rolling the dice to pick your players.

Politicians seem to think that this issue is going to go quietly under the rug but there has been somewhat of an uproar in the daily fantasy community. People in New York have been protesting and have started petitions to get this decision overturned. Many avid participants from other states are holding their collective breath because they know that their home state could be the next one to ban this online activity. DraftKings and FanDuel will continue to make news, and the obsession that is fantasy sports will surely continue to grow regardless of the outcome.